It won't be a surprise to anyone who reads my "Weekly Indicators" column that I have something of a bifurcated outlook for the economy.  The short leading indicators have generally been very positive (and manufacturing got two excellent numbers in the past week), while the long leading indicators have cooled considerably -- but are still positive.

Real M2 is a perfect example of this issue.  It was one of Prof. Moore's original 4 long leading indicators, and was part of the LEI for several decades before being dropped a couple of years ago. 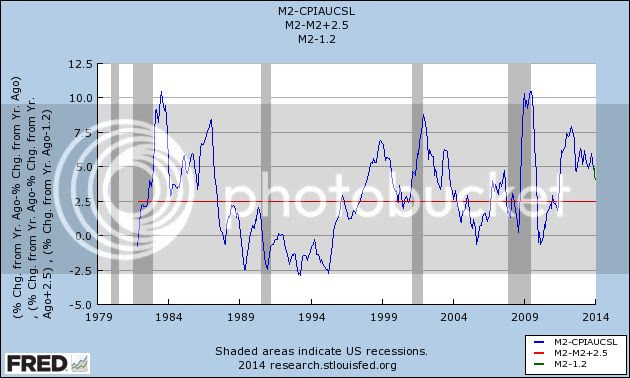 As you can see, on the one hand it has decelerated considerably from its peak about 2 1/2 years ago.  As of yesterday's New York Fed report, for the week it is at about +4.3% YoY.  Which, of course, is still comfortably above the +2.5% level below which, if it remains for a several quarter period, is necessary but not sufficient to signal an oncoming recession.  In fact, it is probably above its average level for the last 30 years.

My gut feeling is that it will continue to decelerate.  But it is just that:  a gut feeling, and nothing on which to base any hard analysis.
Posted by New Deal democrat at 10:07:00 AM