A thought for 2013: The Progressive Economic Case is still Equality, not Armageddon

Six years ago I posted an essay on Daily Kos entitled The Progressive Economic Case: Inequality,not Armageddon.  On this final Sunday of 2013, I think it remains timely.  I've posted it below in somewhat abridged from.  To put it in context, two months previously in an essay called The Panic of 2008? I had said:

[E]very now and then it is prudent to be fearful.  Not panic-stricken, but instilled with enough caution to focus on a serious problem, to check and double-check if one's house is truly in order.     Now appears to be such a time....    There is an excellent chance that the dominant issue of the 2008 election campaigns will not be Iraq nor Iran nor executive power nor immigation, It will be the economy, in the form of this "Panic. "

....
This is NOT the Great Depression II.  Nor is this the stagflationary 1970s.  It is going to unfold as some other Beast.  Only the broad outlines of this Beast appear discernable now:  it will likely feature (1) increasing import prices; (2) wage stagnation (that does not keep up with price inflation; (3) real asset deflation; and (4) possibly a Japan-style "liquidity trap."

---------------------------
Recent surveys show that over 80% of Americans believe the country is on the wrong track.  Increasing percentages of Americans identify themselves as democrats.  They are "ready to jump," [like what a frog in water being heated actually does].     In order to convince them to jump, we need to provide them with the coherent, persuasive, intellectual underpinnings of why the Right Wing has failed, and why they should embrace a new New Deal.    There is an absolutely compelling case to be made, but too often among the blogosphere, that case seems to be marginalized, and drowned out by the shouts of "The Sky is Falling!"  The case to be made isn't Armageddon.  It is Inequality of Economic Opportunity, that has already, slowly but inexoribly, eaten into the standard of living of average Americans.
Now, it could very well be that disaster -- of devastating inflation or deep recession -- is around the corner, but is that what people have to be persuaded of in order to vote for a Democratic economic agenda?  Relying on the idea that an economic Apocalypse is imminent makes us look like tin-hatters every time cataclysm doesn't show up on average Americans' front doorstep.  And it isn't the case we need to make.
The progressive economic case is straightforward:  the 28 years since Ronald Reagan's election have resulted in the middle class suffering, and suffering more acutely as time has gone on.   Reagan used the hoary old line that "a rising tide lifts all boats" but we have seen in the generation since, that it just isn't so.  The rich got bigger and more ornate yachts, while everybody else had to make do with the same old dinghy, a dinghy ever more difficult to maintain.  And every year, about 10% of those dinghies get a hole, spring a leak and sink.
The case to be made isn't Armageddon.  It is Inequality of Economic Opportunity:  the corporations and the wealthy have gotten the benefits, and the average American has taken on the risk and picked up the bill.
The case is compelling.  The percentage of wealth concentrated on big corporations and financial institutions compared with labor is at a high not seen since the 1920s:

It's not a case of the average American's wealth growing, just more slowly than that of the wealthy.  Rather, the middle class hasn't made any economic progress at all in the last 10 years, and is about to see their wealth decline again in this recession.  Measured by quintiles, the lowest 20% has actually lost ground since the GOP came to power. 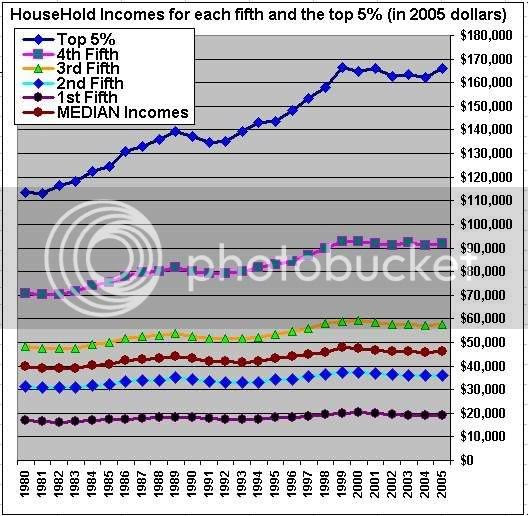 This is a permanent loss in middle class earning power.
To try to keep up, Americans have been taking on Meanwhile pension plans have evaporated.  And while CEOs get golden parachutes even for poor performance, if the company files for bankruptcy, it can suspend benefits or terminate that pension plan.  Indeed, the average American now lives in a society where each year about 1 in 10 households faces a 50% or more loss of income.  But when large financial institutions get in trouble, savers are punished in order to bail them out with low interest rates, if they aren't bailed out directly.

The problem isn't Armageddon, it is inequality.  Specifically, there is one set of rules for the Lords of Finance, and  another set for the peon on Main Street.  Finance is "too big to fail".  The little guy or gal gets crushed, and has to deal with an onerous new Bankruptcy Law to boot.  So profound is this inequality of economic opportunity that there is less social mobility now in America than there is in Europe.
This can't go on forever.  And for the young, already it hasn't.  Crushed by debt, the  average 35 year old maleis less well off now than his forebear of the 1970s.
This is an absolutely  stunning, devastating indictment of GOP economic policies.  After 28 years, the statistics and the graphs can no longer be ignored.  The historical record has been made. They have worked to engorge those already wealthy, while leaving all the risk on the backs of the middle and working classes.  Profit has been privatized and risk left to the public, again and again and again.
A pro-middle class agenda is all we need to create a generation of progressive middle Americans who will vote Democratic.  That agenda isn't too hard to imagine:  an increase in progressive taxation.  A re-commitment to reasonably priced higher education.  An end to the system whereby your medical insurance and care depend on your job and medical costs are exploding.  The re-invigoration of Usury Laws and action against predatory payday lending.  A firm commitment to minimize leverage and speculative bubbles in the financial markets.  Methods to make sure existing regulations are enforced.  Real reform of the Bankruptcy Law to discourage unsuitable lending, and protect pensions from predation during bankruptcy reorganizations.  Enacting a VAT or similar tax to capture profits from overseas outsourcing and to make sure the funds are directed at those in the US who suffered as a result.  A commitment to rebuilding and modernizing our physical infrastructure. Sufficient budget discipline that progressive needs can be funded while the nation's long term financial well being is safeguarded. [And by no means least, a thorough refurbishing of the nation's Estate Tax laws, that prevents inherited wealth three or four or five generations removed from the earned fortune, becoming the basis of an entrenched plutocracy. ]
It is neither necessary nor particularly productive to base the appeal of progressive economic solutions on the idea that the four horsemen of the economic Apocalypse -- insolvency due to national debt, or hyper-inflation, or peak oil, or Great Depression 2 -- are just around the corner.  Telling the truth about the slow, decades long assault on average Americans will suffice.

--------------
Postscript:  Six years later, my beliefs are exactly the same. What is different is that the centrality of inequality - and by that I mean in particular inequality of opportunity, and unequal application of the law - has become accepted far and wide in the progressive econoblogosphere, by such people as Profs. Brad DeLong, Dean Baker, Mark Thoma, Robert Reich and Prof. Paul Krugman. Even Larry Summers has recognized that inequality is "profoundly corrosive."  And of course President Obama recently described inequality  the "defining challenge" facing America.

For reasons many of you already know, I detest even moreso than before those Pied Pipers of Doom who squeal with glee any time they can seize upon some "Sky is Falling" meme.  The case to be made is not Armageddon.  It is that America is failing as a land of equal opportunity.