Unemployment: positive and improving, but not good

Over at Digby's place, David Atkins wrote that Democrats shouldn't be crowing about the unemployment rate.  I'm not sure if anyone has actually been doing that, but on the other hand, I don't think we should pretend that no progress has been made on the unemployment front, either.

Too often I see comparisons that boil down to looking at the basic or U-3 unemployment rate before the recession vs. some other measure, like the U-6 rate, after the recession.  Or the comparisons never look at prior recessions and recoveries.  That's comparing apples and oranges.

Another argument has centered on the employment to population ratio, contrasting the issue of discouraged workers vs. Boomers retiring.  On that score, sometimes it appears that the observing is arguing an all-or-nothing point of view.  That isn't correct, either.  The issue really is, how much is due to discouraged workers vs. how much is due to retiring Boomers.  My point of view is, there's no really good data, and if you simply ascribe 50% to each, you probably aren't far off.  That the ratio of unemployed 25 to 54 year olds has stayed in the basement argues that there is still a lot of work to do, no matter what.

One attempt to explain the data has come from the Economic Policy Institute.  They claim to have a metric for "missing workers" that takes into account Boomer retirements.    One problem with their work, as I pointed out earlier this week, is that the monthly Household Survey, the data on which they rely, already specifically has a measure ofworkers who want a job now but aren't actually looking, the precise thing they claim to be estimating.  I don't understand why I should give much credence to their metric, which relies upon the continuing accuracy of an estimate made in November 2007, when I have the up to the present data specifically published each month.

Beyond that, their measure shows an average of -20,000 or more "missing workers' over a 24 month + period from summer 2006 through autumn 2008.  A negative number of  "missing workers" is a logical impossibility and cannot be laid off on monthly variance where it occurs so consistently for so long.   In fact, if the nonfarm payrolls report has been an accurate measure for the last two years, their current reading of nearly 6 million "missing workers" might not just be wrong, it might be nearly impossible! - but I haven't crunched the numbers enough to be reasonably sure.

So what is the overall story as to unemployment?  The below graph shows the situation pretty well, I think  The normally reported U-3 rate, currently at 7%, is in blue, and the measure including marginally attached and part time workers for economic reasons, or U-6, is in red.  The green line is the number of unemployed workers plus those not in the labor force, but who say they want a job now.  Finally, the broad measure of discouraged and part time workers, plus those who haven't looked, but say they want a job now, is in orange: 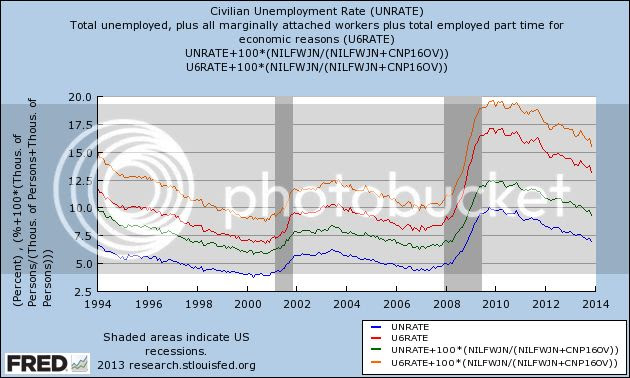 The bottom line for all of these measures is really the same.  There has been substantial improvement since their worst readings at the end of 2009.  The U-3 bassed measures have fallen about 3%, and the broader U-6 measures, by nearly 5%.

More pointedly, while the unemployment rate is positive, and it is improing, it can hardly be characterized as "good."  Back when I rode my pet T-Rex to Bedrock Junior High in the 1960's, 6% (U-3) unemployment was considered the dividing line between a fair and a poor economy.

That strikes me as about right now as well.  At the rate the unemployment situation is improving, it will take another year for the U-3 rate to cross that threshold.  It will take another 2 years for all of the rates shown above to reach the levels they were at in the late 1990's and throughout most of the 2000's up until the "great recession."  And there is no guarantee at all that we won't have already started our next recession by then.
Posted by New Deal democrat at 12:43:00 PM