Cattle Prices Are Near 25 Year Highs 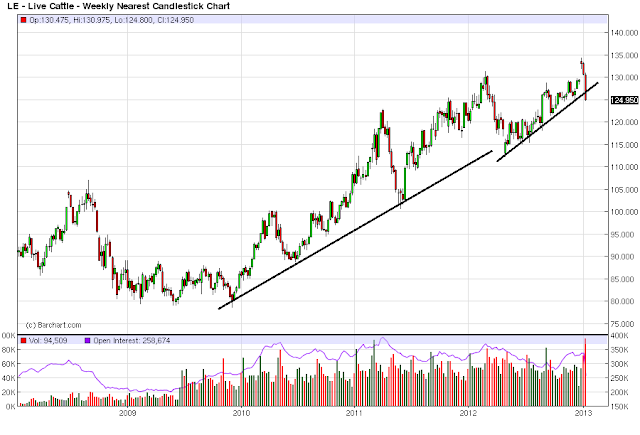 The top chart is a 25 year chart of live cattle prices.  From 1988 until 2002, prices were relatively stable, with fairly tame price swings (remember that each bar on the top chart represents a month, which the space between the horizontal lines represents two years).  The first big price move occurred between 2004 and 2008, when prices generally started trading between the 80 and 100/105 level.  We see the next big move beginning in 2008 when prices rallied from the 80 price level to their current level of 124.

The second chart is a five year chart, and it places the latest rally in perspective.  Prices have rallied pretty consistently from 2008 until today, with the exception of a gap down in 2012.

So -- why the increase?  There are two reasons.  First, as the number of middle class people increases world wide, their tastes and preferences change.  This means they want to start eating meat more often.  The second reason is the spike in the grains complex, which is the primary food source for cattle.  As the cost of grains has increased, the cost of raising and producing cattle has increased.  This has led to an increase in the selling costs as ranchers have sought to protect their profits.
Posted by Unknown at 10:00:00 AM