An Overview of the EU Economic Situation

Lost in the headlines coming out of Europe is any real mention of their overall economic well-being.  So, let's remedy that problem by doing just that -- looking at the data.

The overall annual EU growth rate has been declining for the last 5 quarters.  This is obviously caused by the Greek/debt crisis (which is negatively impacting confidence) but is also the end result of austerity policies which also lower growth. 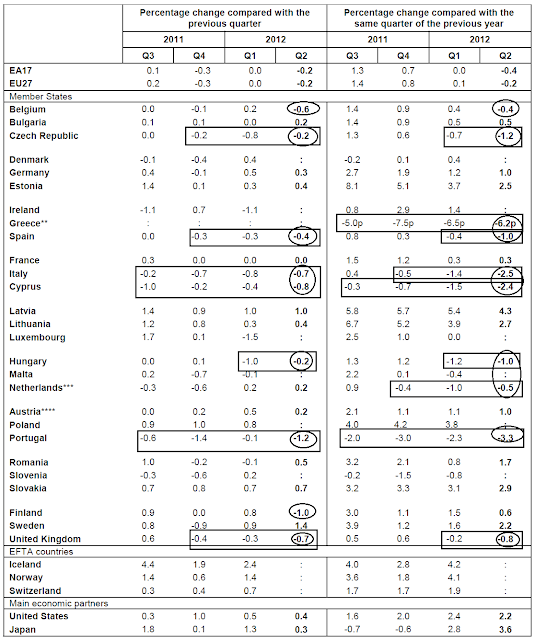 The above data is from the latest Eurostat GDP report.  The left side contains quarter to quarter data, while the right side contains year over year data.  I've circled the last quarters where there has been a decrease and placed rectangles around time series that show more than one quarter of contraction.  Notice that Italy, Cyprus, Hungary, Greece, Spain, Portugal and the Czech Republic are experiencing lengthy economic downturns.  Also note the UK falls into this category. Belgium and Finland are now adding to the countries that are experiencing trouble.  In short, there are problems across the eurozone that are widespread.

As a result of the weak economic growth, we see a continued increase in unemployment, which hit 11.2% recently and has held there.

Slower economic growth also leads to lower industrial production.  This number has been negative for the better part of the year. 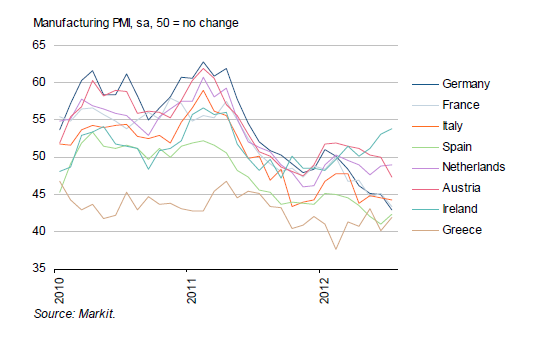 The above chart from the latest Markit manufacturing report shows the breadth of the manufacturing slowdown.  It's basically hitting the entire euro area.

The above chart shows the Y/O/Y percentage change in retail sales.  This is another poor chart, but it is to be expected considering the overall economic backdrop.

There are a few good data points.

Inflation is low -- and it's been declining.

While there is a current account deficit, it's actually pretty low.

But, in short, the EU economy is grinding slower.