ALWAYS bet against the Pied Piper of Doom


It appears that--based upon the ongoing analysis of reports on two economy-related stories that started to develop late on Tuesday--the shit may, indeed, be hitting the fan concerning late-breaking news and commentary on ... the truly dire straits of the finances of at least some of our country's states and municipalities.

Over in municipal- and state-default land, a (very) highly-respected stock market analyst, Institutional Risk Analytics' Chris Whalen, has made public pronouncements that California will default on its debt.


In Sunday's NY Times' lead, Michael Cooper and Mary Williams Walsh talk of an ongoing, massive collapse in state and municipal budgets around the country.


...Some of the same people who warned of the looming subprime crisis two years ago are ringing alarm bells again. Their message: Not just small towns or dying Rust Belt cities, but also large states like Illinois and California are increasingly at risk...

The journalists focus upon commentary from Wall Street analyst Meredith Whitney, someone who's gained a well-earned reputation (she's also one of my favorites) for prescience due to the fact that she was one of the first to warn us of a mortgage meltdown. She now "...sees similar problems with state and local government finances."

NOTE: In case you don't recall, in December 2010 Meredith Whitney predicted "between 50 and 100 'significant' municipal bond defaults in 2011, totaling 'hundreds of billions' of dollars."


Up until now, the concept of states filing bankruptcy has been a moot point. According to various legal precedents, basic definitions of sovereign law, and the U.S. Constitution, it simply couldn't happen. Up until now...

...I can already read the diary comments in coming months where the DKos audience is told how Main Street will benefit from state bankruptcies...and, of how many jobs this will save.

....The real question, IMHO, is this: Since when did Bank of America and Citigroup become more important to our nation than California, Illinois and New York?

Here's a graph of the municipal bond index since the date of the first diary quoted above, 13 months ago: 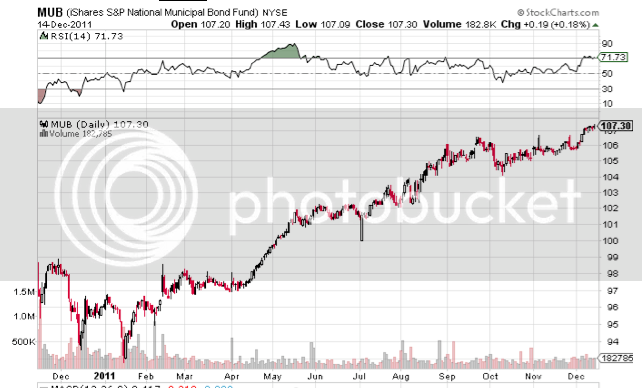 In case you didn't already notice, the three false prophecies by the Pied Piper of Doom almost exactly coincide with the bottom of the three V's at the bottom left of the graph.
Posted by New Deal democrat at 11:30:00 AM