Nothing seems to get people more interested in arguing about economics than talking about the Great Depression. To some people it was the greatest economic success of the last 100 years, while others argue it was the beginning of the massive welfare state which has destroyed civilization as we know it.

Regardless of your political orientation, there is one common thread to both sides of the discussion about the Great Depression: a remarkable and perhaps understandable focus on the politics of the time rather than the pure economic data. So this week all I'm going to look at is data to explain what happened. 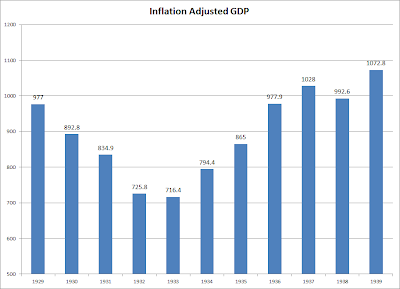 Let's start with GDP, which the above chart shows in real (inflation-adjusted) terms. Notice the "V" shape. The economy contracted from the years 1929-1933 but then expanded from 1933 onward with the exception of a dip in 1938. Also note that by 1939, real GDP was at a decent rate above the 1929 level. This chart tells us there was plenty of actual economic growth during the Great Depression. 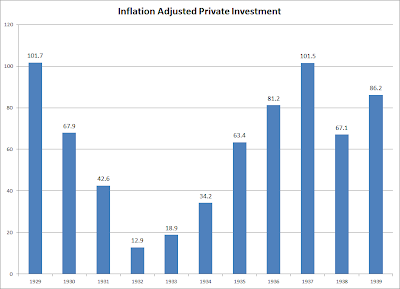 One of the common arguments made against the idea of government spending is that an increase in government spending will crowd out private spending. However, the above chart shows that did not happen. While private investment did contract from 1929-1932, we saw a slight uptick in 1933 followed by strong advances in the years 1934-1937. In 1938 there was a drop down but levels started to rise again in 1939. This chart demonstrates that private investment rebounded fairly quickly during the Great Depression. 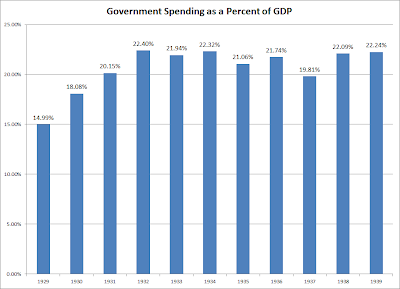 The above chart shows government spending as a percentage of GDP. Notice that the highest level this reached during the Great Depression was 22.4% in 1932. These levels are commensurate with those that exist today.

The point of the above charts is to illustrate that the entire decade was not one of complete disaster; for the latter half of the decade the economy grew quite well. Next, we'll look at other macro-statistics.
Posted by Unknown at 11:30:00 AM