Last week all the BLS issued both the PPI and CPI. Let's start out by looking at PPI

The Producer Price Index for finished goods rose 0.8 percent in January, seasonally adjusted, the U.S. Bureau of Labor Statistics reported today. This advance followed increases of 0.9 percent in December and 0.7 percent in November and marks the seventh straight rise in finished goods prices. At the earlier stages of processing, prices received by manufacturers of intermediate goods moved up 1.1 percent, and the crude goods index rose 3.3 percent. On an unadjusted basis, prices for finished goods advanced 3.6 percent for the 12 months ended January 2011.

Let's take a look at the chart on a five year basis: 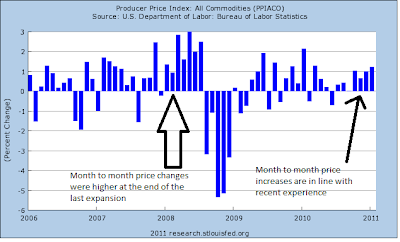 Notice that the recent price increases are in line with the increases seen at the end of the last expansion before the huge spike in prices. While this could mean overall PPI is "heating up" we would need more data to confirm the trend.

Let's take a look at the same data from a year over year perspective: 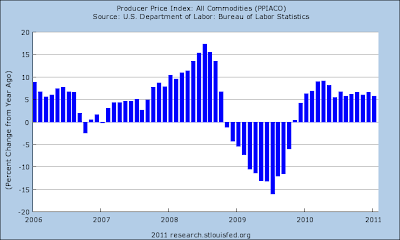 First, it's been over a year since the large drops of PPI into negative territory, so the YOY numbers are less skewed by the extreme movements during the recession. Notice these numbers are right in line with those seen during the last expansion.

Let's broaden our view by looking at the data in a chart that compares core and total PPI for the last 30 years: 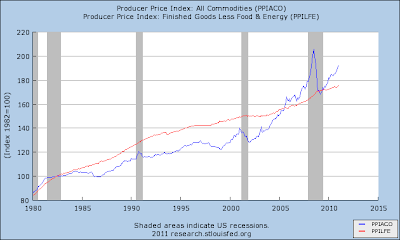 In the above chart, the red line is core PPI while the blue line is total PPI. Notice the following: 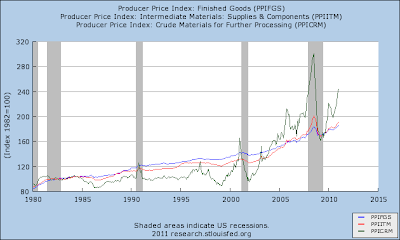 The above chart shows crude, intermediate and end producer prices for the last 30 years. Notice that we can group these prices into two groups: crude prices (which are far more volatile) and intermediate and finished PPI (which are far less volatile). Also note the intermediate stages of production appear to absorb the price increases of crude goods very well and by the time we get to finished goods the impact of crude price volatility is noticeably diminished. 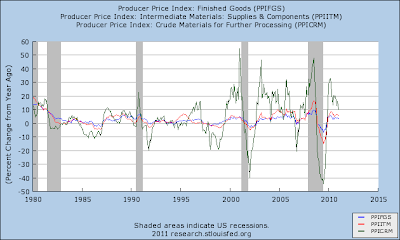 The above chart simply highlights the previously mentioned point in a year over year format.

In short, the above historical data indicates later stages of production have the ability to absorb the highly volatile nature of crude prices, which is good news, as it appears we are in the middle of volatile crude price markets.
Posted by Unknown at 8:05:00 AM