The BLS has issued all of the inflation reports for the month, so this is a good time to take a look at the overall data to see if we are still in a deflationary scare or not. Let's start with PPI:

The Producer Price Index for Finished Goods rose 0.8 percent in November, seasonally adjusted, the U.S. Bureau of Labor Statistics reported today. This increase followed a 0.4-percent advance in both October and September. At the earlier stages of processing, prices received by manufacturers of intermediate goods climbed 1.1 percent in November, and the crude goods index moved up 0.6 percent. On an unadjusted basis, prices for finished goods rose 3.5 percent for the 12 months ended November 2010, their smallest 12-month increase since a 3.1-percent advance in August.

Let's look at the year over year (YOY) percentage change of producer prices at various stages of production. 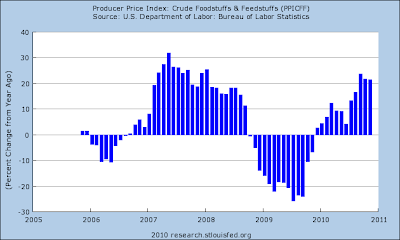 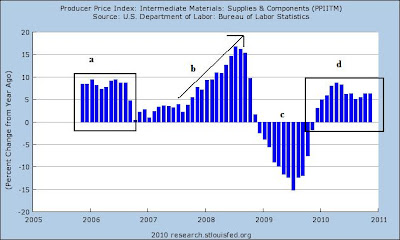 But intermediate prices are still tame. Notice how the percentage bars in the recovery (d) are lower than both period (a) and (b) during the last expansion. This tells us that -- so far -- crude price increases are being absorbed at the intermediate stages of production 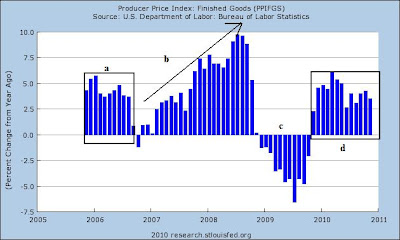 The PPI for Finished goods is also still lower than the last expansion (compare (d) to (a)).

Finally, here is a graph of all the PPIs of the various states of production on a linear scale: 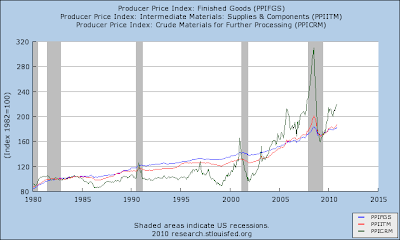 The Consumer Price Index for All Urban Consumers (CPI-U) increased 0.1 percent in November on a seasonally adjusted basis, the U.S. Bureau of Labor Statistics reported today. Over the last 12 months, the all items index increased 1.1 percent before seasonal adjustment.

The indexes for food, energy, and all items less food and energy all increased slightly in November. The index for food at home rose in November after being unchanged in October, with the indexes for eggs and nonalcoholic beverages both rising notably. Although the index for gasoline rose, the index for household energy declined and the increase in the energy index was the smallest in five months.

The index for all items less food and energy rose in November after being unchanged the previous three months. Increases in the indexes for shelter and airline fares accounted for most of the rise, while the indexes for new vehicles, used cars and trucks, and household furnishings and operations all declined. 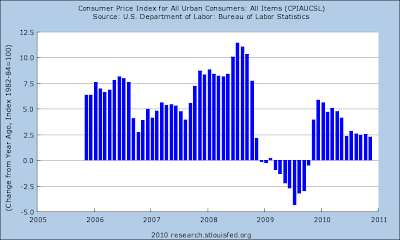 Total CPI is printing about 2.5% YOY, which is still very low. It indicates there is little to no price pressure in the economy right now. More importantly: 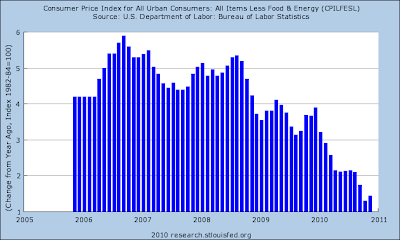 The core figure has been declining on a YOY basis for almost two years, indicating the pace of decline continues and deflation is still an issue.

Finally, let's take a look at a chart that compares the YOY change in core and total CPI since 1980. 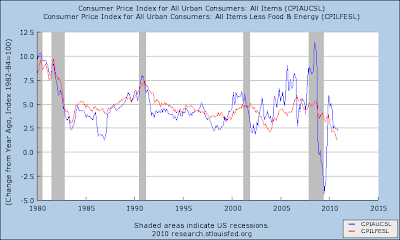 In the above chart, total CPI is the red line, while CPI less food and energy is the blue line. Notice you can divide the chart into basically two areas. The first is before the year 2000 when the core and total CPi tacked each other pretty closely and total CPI was far less volatile. Over the last 10 years, notice the total CPI's YOY percentage change has become extremely volatile, largely as a result of commodity inflation.

Looking at more detail into the last 10 years, we get this chart: 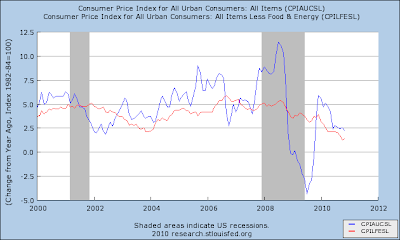