Will Oil Threaten the Recovery (Again)?

Crude-oil futures settled at their highest in more than two years Wednesday, defying a rising dollar as a U.S. government report showed a larger-than-expected drop in inventories.

The contract had traded lower just moments before the Energy Information Administration released its update on U.S. petroleum inventories as the dollar continued to rise.

A surprise decline in crude stockpiles for last week brought prices back into positive territory.

The update ran counter to analyst expectations of an increase for crude inventories and smaller declines for petroleum products supplies. 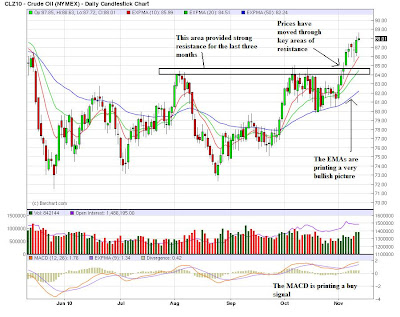 The lower 80s provided strong resistance for oil prices for the last three months. But over the last week, prices have moved through this important area of resistance. In addition, the EMAs indicate the short and intermediate trends are bullish which is confirmed by the MACD.

Because of oil's central nature to the economy, this is a very important development that needs to be watched closely.