The Labor Department is citing special calendar factors for an unexpected jump in initial jobless claims to 460,000 in the April 3 week vs. the prior week's 442,000 (revised 3,000 higher). The Labor Department is not only citing Easter as a distortion but also the Cesar Chavez holiday in California, and it is further warning that seasonal volatility will shake up the numbers through the next several weeks. Otherwise, according to Market News International, the department reports "nothing unusual."

Special factors give special importance to the four-week average which is at 450,250, up 2,250 from the end of March but down more than 20,000 from the beginning of March. How this month-to-month comparison tracks in the weeks ahead will shape expectations for the April employment report. 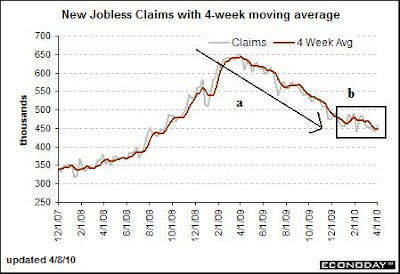