An Evaluation of the Fits and Starts Expansion Argument

On August 31 of last year, I outlined my theories regarding the upcoming expansion in an article titled The Fits and Starts Expansion. As the economy has now had two quarters of GDP growth, it seems an appropriate time to evaluate the strengths and weaknesses of that argument to see how it holds up.

I identified the following areas as those that would contribute to economic growth: personal consumption expenditures, stimulus spending, inventory adjustments, Asian consumers and manufacturing. Let's takes these one at a time.

Regarding PCEs, I wrote the following:

Central to this theory is the idea that the US consumer will continue to spend, but at a lower pace. To that end, consider this chart of the year over year percent change in real (inflation-adjusted) PCEs: 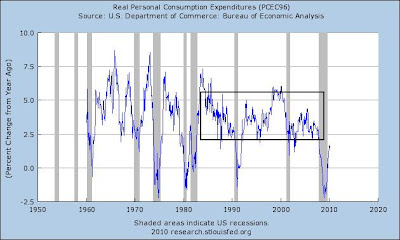 Notice that since the 1980s, the average year over year percentage change in PCEs has been between 2.5% and 5%. There is no reason to think this number couldn't come in between 0% and 2.5% -- it simply never has. However, that number is currently in the 0% - 2.5% range. Only time will tell if it stays there, but, so far so good.

The reason for this pace is the death of the US consumer has been greatly exaggerated. Consider this chart of real PCEs: 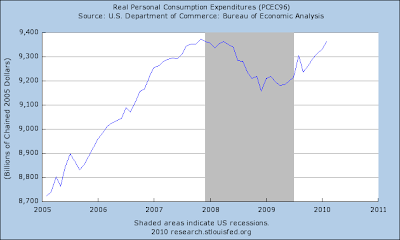 Real (inflation-adjusted) PCEs have been increasing since the first quarter of 2009.

Inventory adjustments are another positive part of the story -- one that we're just starting to see pick-up:

These numbers are just starting to come back. Here is a chart of total business inventories from the St. Louis Fed: 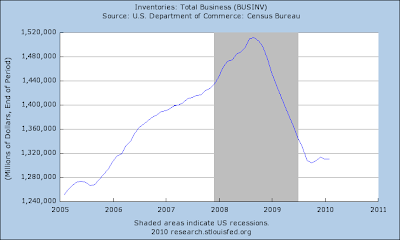 Total inventories are still at incredibly low levels. But, 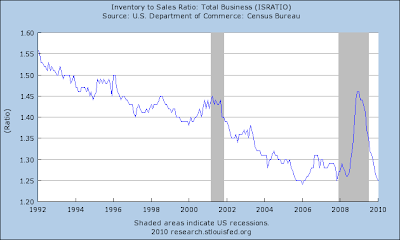 The inventory to sales ratio is also low, indicating that businesses will probably have to continue restocking for the rest of the year. That means the inventory build story should continue.

Manufacturing has also been a big part of the story. Consider these charts: 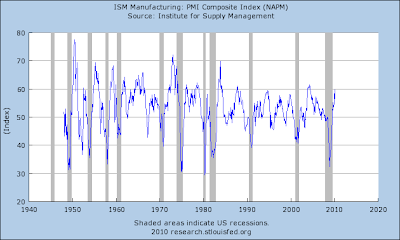 The Chicago PMI index is at a very high level. In addition, 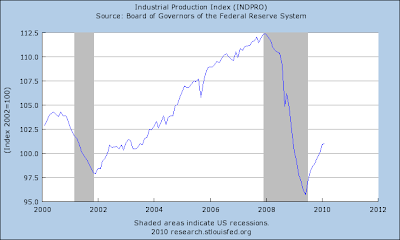 Industrial production has bounced back, as has 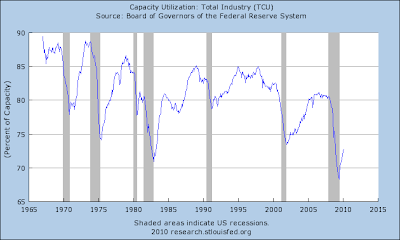 Asian consumers are doing better, so far that is not translating into a meaningful improvement in the trade deficit.

So, in general the first and starts expansion is on track with the exception of exports lowering the trade deficit.
Posted by Unknown at 9:30:00 AM