Why I Support A Public Health Care Plan

I originally wrote this article about two years ago. The logic is still sound.

The current debate over health care is making me sick (excuse the pun). I have never seen so many people get it so wrong. Here is the logic behind the need for public health insurance.

While I will almost always advocate for a market based economic approach to allocating resources, health care is not an area where the profit motive should dominate decision making. Simply put, the end product is a patient's health. Private health insurance has a conflict of interest between the insurance company and the insured which will be resolved in favor of the insurance company a majority of the time.

1. Deny the insured's claim, or
2. Delay payment to increase the possibility the insured will drop his claim

In addition, insurance companies will seek to minimize the amount of money they would have to pay to the insured. Again, remember the product here is the patient's health. Supposed the insured has a disease where the cure is expensive but a cheaper alternative exists. However, the cheaper alternative would moderately or seriously compromise the insured's quality of life. Because the insurance company is profit-driven, it will probably opt for the cheaper treatment that compromises the insured's quality of life.

Secondly, private health care is more expensive the public health care. Here are three charts compiled from the Organization for Economic Cooperation and Development. The figures are from 2004.

First, the US spends the least amount of public money on health care. 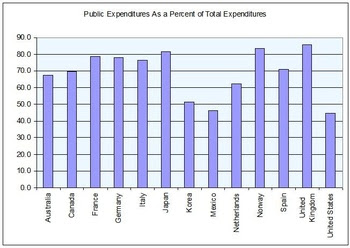 However, the US spends the most on health care as a percentage of GDP 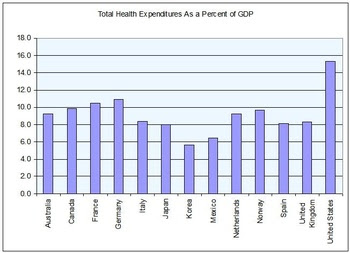 and on a per capita basis. 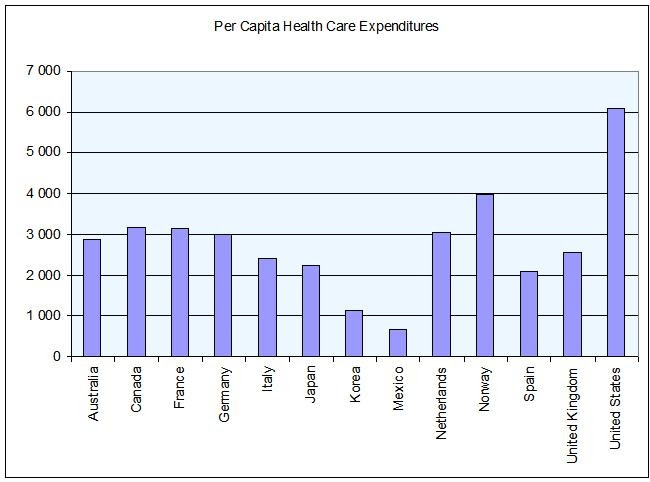 Finally there is the issue of competitiveness. I'll let General Motors of Canada make the argument for me.

"The Canadian plan has been a significant advantage for investing in Canada," says GM Canada spokesman David Patterson, noting that in the United States, GM spends $1,400 per car on health benefits. Indeed, with the provinces sharing 75 percent of the cost of Canadian healthcare, it's no surprise that GM, Ford and Chrysler have all been shifting car production across the border at such a rate that the name "Motor City" should belong to Windsor, not Detroit.

Just two years ago, GM Canada's CEO Michael Grimaldi sent a letter co-signed by Canadian Autoworkers Union president Buzz Hargrave to a Crown Commission considering reforms of Canada's 35-year-old national health program that said, "The public healthcare system significantly reduces total labour costs for automobile manufacturing firms, compared to their cost of equivalent private insurance services purchased by U.S.-based automakers." That letter also said it was "vitally important that the publicly funded healthcare system be preserved and renewed, on the existing principles of universality, accessibility, portability, comprehensiveness and public administration," and went on to call not just for preservation but for an "updated range of services." CEOs of the Canadian units of Ford and DaimlerChrysler wrote similar encomiums endorsing the national health system.

Health care costs are killing American business. Our international competitors don't have to deal with these costs. As a result, private health care is making US business less competitive.

So, public health eliminates a conflict of interest that compromises individual health, is cheaper and makes the US more competitive. And we don't have a public health system because?
Posted by Unknown at 11:30:00 AM