Spencer at Angry Bear, discussing yesterday's +0.9% increase in industrial production, produces an excellent graph comparing the increase in production since it bottomed last June with prior "minor" or "major" recessions, and calls this rebound "moderate": 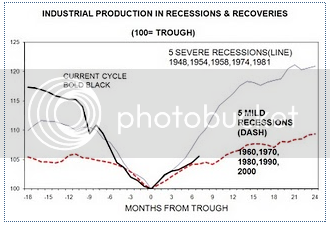 So I continue to think that the best way to view this recovery in production is to compare it with the last V-shaped recovery (1983) and "jobless" recoveries (1992-3 and 2002-3). Seven months after the bottom of production, here is what they look like: 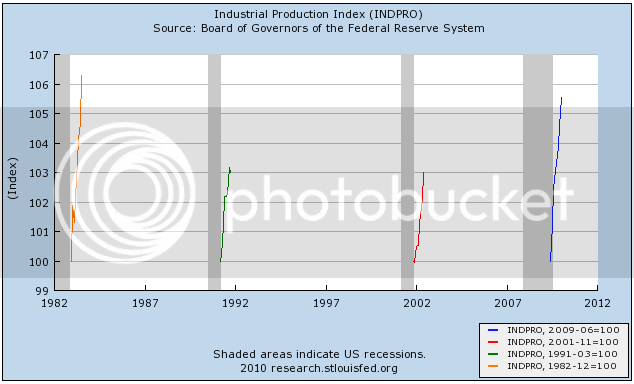 This recovery in production, unlike the two last "jobless" recoveries, is definitely V-shaped, looking very much like that of 1983.

Commenter Dragonchild has made an excellent point several times about how suppliers are stretching out deliveries rather than hiring new employees. In other words, they are "hoarding" jobs. I don't see how it can go on much longer. If there are 10 vendors in a market, surely 1 or 2 are going to figure out that they can grab market share this year by hiring at least new temporary workers and promising shorter delivery times. Once that happens, the other vendors almost have to match them, and the dam breaks.

So while this recovery has been "jobless" so far, because payrolls ex-November haven't been positive, that doesn't necessarily mean there isn't going to be a delayed V.
Posted by New Deal democrat at 10:00:00 AM