It's getting so tiresome to read about how the increases in minimum wage are the direct cause of skyrocketing teen unemployment. See here, here, and here for just three stories on the subject.

To support this argument, anti-minimum wage advocates trot out charts that generally look like this: 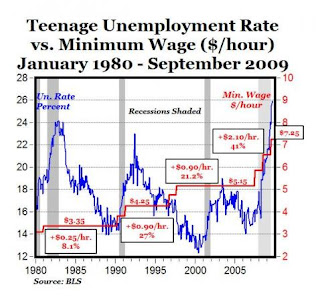 Now, what I see in this chart is that teen unemployment -- like most unemployment in general -- is much more highly correlated to recessionary periods in the economy than it is to the minimum wage. But that's just me. Honestly, I just can't look at that chart and seriously argue that there's a cause/effect relationship between minimum wage and teen unemployment. But we live in an age where arguments gain traction on the skimpiest of evidence (sometimes even none whatsoever -- see: the 1977 CRA caused the near economic collapse of 2008 -- a time bomb with a 30 year fuse!!!).

Allow me to make another argument, one that I think makes much more sense. I first made this argument over at Blah3, and I'll make it again here with some updated charts.

What I suspect is fairly simple: That simple demographics coupled with the damage wrought by this recession on the Baby Boom generation -- in terms of both real estate and investment portfolios (particularly retirement portfolios) -- is so great that many Boomers have realized they're going to have to postpone retirement (see one story on that here, there are thousands on "postponing retirement" out there on The Google).

Let's look at some charts and see if they might make more sense than the minimum wage argument. First up, let's look at the ratio of 55+ Employed persons/Teen Employed and see what that looks like: 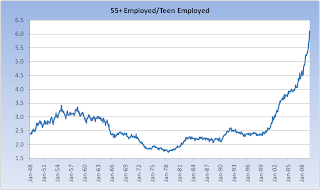 Gee, what do you know -- this ratio has been on the increase since about the turn of the century, the exact time the first of the Boomers were turning...55. Whaddya know, they're staying in the workforce and, arguably, crowding their own kids out of it. There are now over 6 55+ employees in the workforce for every teen -- a record that shows little sign of letting up.

Second, let's look at the 55+ and Teen cohorts as a percent of the Employed Workforce. Again, what we see is that the older generation is crowding out the younger generation in a trend that well predates the recent set of minimum wage hikes we've seen.

Look at the two charts I've presented versus the absurdity at the top and ask yourself, which argument makes more sense? Which argument does the data seem to support?

In short, the minimum wage canard is yet another feeble political attempt to lay the economy's woes at the feet of Democrats. It's shameful, really, but not at all out of character. I expect I'll be revisiting this issue with each passing NFP print. Waste of time, but somebody's got to do it.

And, so I can preempt this ridiculous argument seven years hence (assuming the minimum wage rises again), here's a chart showing the BLS' forecast of exactly how lopsided these two cohorts are going to look in 2016:

What I suspect will happen in 2016, sadly, is that those with a political agenda will look at the numbers and claim the disparity is being caused by -- you guessed it -- minimum wage hikes that ocurred eight years prior.