Cash for Clunkers and Inventories

More than $1.03 billion has already been paid out to cover the 245,384 vehicles traded-in under the program designed to replace gas guzzlers with more fuel-efficient vehicles, according to the U.S. Department of Transportation. Another $2 billion is now being funneled into the program, which is slated to run through November.

Starting last year, the Big Three U.S. auto makers began to cut back production to cope with swelling inventories as consumers skipped purchases amid the recession. During the bankruptcies of GM and Chrysler, both auto makers idled their plants, further reducing supply. Heading into July, it appeared auto makers finally had control of their inventories.

That changed as the government's clunkers program set off a flurry of buying. Even consumers who didn't qualify for the program made purchases. Under the program, formally known as the Car Allowance Rebate System, a customer who trades in a vehicle rated at 18 miles per gallon or less qualifies for a government voucher of $3,500 or $4,500 to buy a new car rated at 22 mpg or more. The allowance goes to the dealer, who must scrap the old vehicle.

With that story in mind, consider this chart: 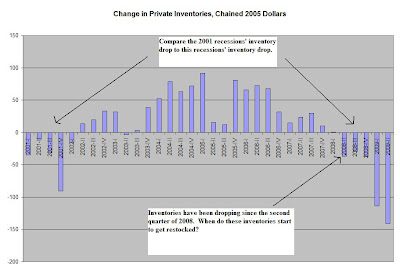 The depth of the inventory correction is very deep. As a result inventories are incredibly lean. Any meaningful bump in consumption will possibly lead to shortages as producers ramp up production. I don't know how much this is going to be part of the recovery story. I do however think it will play a part.