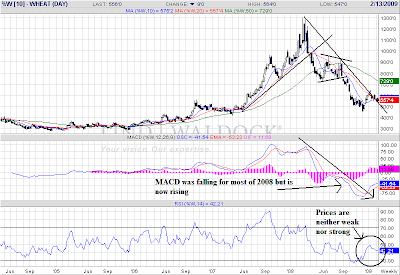 After a major rally from 2007 to 2008 when prices increased about 2.5 times, prices have come down in a big way, essentially returning to their levels where the rally started. Note how the MACD was dropping hard for most of 2008. Also note for the same time the RSI was dropping indicating prices were getting weaker. The MACD is now moving higher and the RSI indicates prices are getting stronger. But note the 20 and 50 week SMAs are bother moving lower. In addition, prices have run into continued resistance at the 20 week SMA. 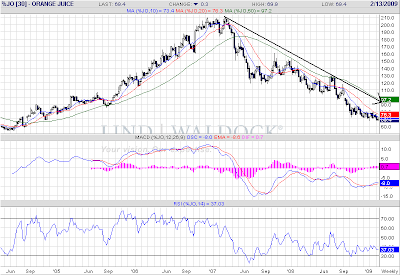 Orange Juice has been dropping for almost two years. Prices have essentially taken a round trip and are now back to where they started a few years ago. The MACD has provided no direction indication for the last year and the RSI shows prices are "medium". However, the price/SMA relationship shows a very bearish orientation: the short SMAs are below the longer SMA, all the SMAs are moving lower and prices have run into upside resistance at all three SMAs over the last year or so. 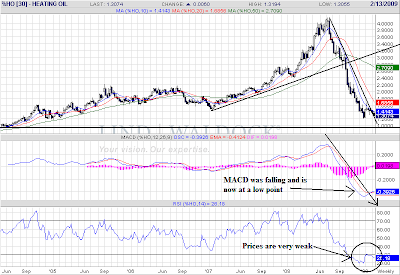 Heaing oil has fallen in conjuntion with the oil market. Notice that starting in roughly last summer, prices dropped hard losing about 70%+ of their value. In addition, note the corresponding drop in the MACD, RSI and SMAs. Right now prices look like they are trying to bottom, but until they move higher from this level we won't know if this is the real bottom or just a stop on the way to something lower.
Posted by Unknown at 6:52:00 AM