Is the Credit Market Thawing?

Executives of Mead Johnson Nutrition Company will ring the opening bell to celebrate the baby formula maker's initial public offering, which will begin trading on Wednesday. The former unit of Bristol-Myers Squibb Company raised $720 million in its IPO at a price of $24 a share, the top of its $21-$24 range. In a sign of healthy interest, the size of the offering was increased to 30 million shares from the initial size of 25 million shares.

A growing number of big companies are taking advantage of the thawing credit markets to raise large sums of money at low interest rates, with Cisco Systems Inc. Monday selling $4 billion in bonds to bolster its war chest for acquisitions.

The big Cisco offering follows a string of successful efforts just in the past five weeks to tap the market for corporate debt. The size of the offering -- and the relatively low-risk premiums attached to the bonds -- indicate that investors are hungry for debt from highly rated companies.

Since the beginning of the year, U.S. companies have sold $78.3 billion of investment-grade corporate bonds that aren't guaranteed through a government program, according to research firm Dealogic. This is up from the December quarter when companies sold on average $21 billion of nongovernment-backed debt a month.

The accompanying image gives us some hope.

Let's look at some data from the Federal Reserve:

Total commercial paper outstanding shows that asset-backed paper (securitized) started dropping in mid-2007 and has been dropping ever since. In addition, financial paper is still weak. But non-financial appears to be doing well. This chart tells us there are still problems with the financial sector (duh!).

This chart shows the commercial paper spread has come down significantly from it's highs at the end of last year. While rates are still high compared to other points during the latest expansion, they are far better then they were. 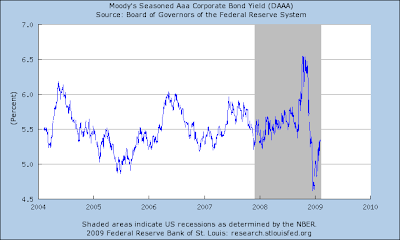 Aside from the spike at the end of last year, AAA paper is doing quite well. 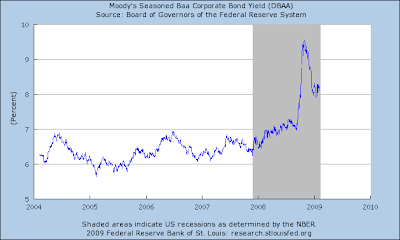 Baa paper, however, is still under stress.