Inflation, the Depression and Other Ruminations

There has been a lot of talk lately using the word "depression." I am in no way an expert on this event. But given the recent increase in the use of the word depression I think it would be a good idea to look at some of the economic items from that period.

Let's start with inflation. Here is a chart from the St. Louis Federal Reserve that shows the year over year percentage change in inflation. 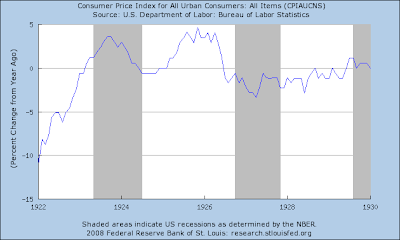 Let's start by assuming inflation measuring statistics were less developed in the 1920s than now. That being said, this is all we've got from that period. So -- let's see what this chart says.

First, notice there were two recessions during this period. According to the NBER these were May '23 - July '24 and October '26 - November '27. But also notice the lack of year over year growth for the last four years of the decade. A little inflation is a good thing -- it indicates there is either a strong demand to increase prices or a strong enough increase in costs to allow companies to increase prices. Either way, a little inflation is healthy. However -- there was no inflation for the last four years of the decade. That is not healthy at all. 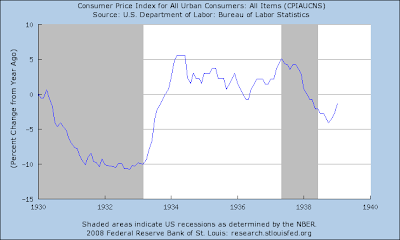 Above is the year over year percentage change in inflation from 1930 - 1939. Notice the price collapse in the first four years of the decade. From 1930 - 1934 year over year price movements s were negative. That's a heck of a lot of economic damage to recover from. Notice that year over year prices came back in 1935, but because this number was an increase from a huge drop I would argue it wasn't until 1936 at the earliest that prices got back to a healthy rate of increase. And then it would still take a few years to get back to 1930 levels.