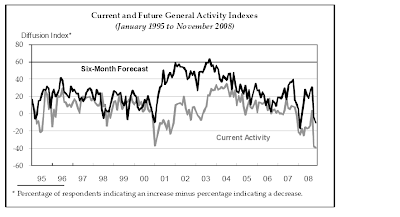 Manufacturing in the Philadelphia region shrank in November at the fastest pace in 18 years, a sign that the credit crunch and weak demand are causing companies to cut back.

The Federal Reserve Bank of Philadelphia's general economic index was minus 39.3 this month, weaker than forecast and the lowest reading since October 1990, from minus 37.5 in October, the bank said today. Negative readings signal contraction. The index averaged 5.1 last year.

The deepening credit crisis and economic slump are forcing companies to trim payrolls, investment and production. Slowing global demand is weighing on manufacturing, which accounts for about 12 percent of the U.S. economy.

``Manufacturers are getting hit by several different forces,'' Dean Maki, co-chief global economist at Barclays Capital Markets in New York, said in an interview with Bloomberg Television. ``Real exports are being hit pretty hard because the slowdown is heading abroad as well.''

Why is this important?

-- The NBER uses manufacturing activity as an indicator for when a recession starts.

-- Exports were a bright spot for the economy last year and part of this year. Europe's and Asia's slowdown along with the US consumer slowing his spending is obviously having an impact

-- Manufacturing employment has been declining since the beginning of 2007.