Commodities Rally Now Over; Correction Is Taking No Prisoners

I highlighted the commodities market last Wednesday as I do every week. The bottom line is the commodities rally is clearly over. Just to refresh your memory, here is weekly chart of the CRB index. 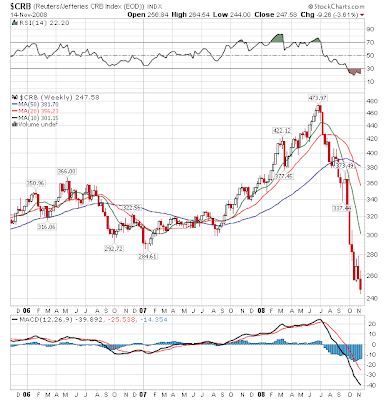 This correction is now starting to take its toll:

Mining companies -- which couldn't dig minerals out of the earth fast enough just a few months ago -- now are struggling to climb out of a very deep hole.

On Friday, the world's biggest miner, BHP Billiton, said major Chinese customers are trying to delay purchases of iron ore as China's building boom slows sharply. The scale of the December delays could cut BHP's iron-ore deliveries by at least 5% for the full year.

Big steelmakers world-wide have been cutting production as much as 35%. U.S. Steel Corp., the largest steelmaker in the U.S, last week said it was laying off 2% of its work force due the the slowing economy.

Nearly every mineral is affected. Molybendum, which gives steel its strength, fell 60% to $12 a pound in the past year. Copper -- recently so expensive that burglars would break into houses not to steal jewelry, but to steal the plumbing -- is off more than 50% since April. Tin smelters across Indonesia, where nearly 25% of the world's tin is made, are halting production.

The mining business has been through cycles before, and is exceedingly volatile. But analysts say they can't recall a more sudden, sharp decline in prices.

Still, at current market prices, it's hard to make money running many mines, which have high labor, equipment and energy costs. About 30% of nickel mines and more than 15% of zinc mines have turned unprofitable due to falling prices.

Here is a chart from the Bureau of Labor Statistics of employment growth in the natural resources area for the last 8 years:

The chart shows this area of the economy added about 203,000 jobs to the economy over the course of the latest expansion. While this is clearly not the largest area of job growth, it did contribute to the overall economy. Also note we have not as of yet seen downward move. Don't expect that trend to last much longer.

And the basic materials sector of the market is also taking a hit:

Notice the following on the yearly chart:

-- Once prices moved through January lows, they dropped hard, falling 34%.

Bottom line: Come on China! Let's see some more stimulus!
Posted by Unknown at 9:30:00 AM