What Will Be the Chain Of Recessionary Events

There's a great article in today's WSJ which uses California as an example of what will happen to the rest of the US. This gives us a good template for how events will unfold. Let's take a look:

But even before the most recent blows to the national economy, Californians were feeling the downward drag of a consumer-led recession -- in which shrinking home values caused people to rein in their spending, fueling unemployment and, in turn, sparking further spending cuts and joblessness.

This explains why the housing downturn is so incredibly destructive. It's not just home prices that take a hit. Homes are the single biggest asset most people own. When its value is dropping it hits homeowner's psychology incredibly hard. And dropping home prices are.

About 75.5 million U.S. households own the homes they live in. After a housing slump that has pushed values down 30% in some areas, roughly 12 million households, or 16%, owe more than their homes are worth, according to Moody's Economy.com.

The comparable figures were roughly 4% under water in 2006 and 6% last year, says the firm's chief economist, Mark Zandi, who adds that "it is very possible that there will ultimately be more homeowners under water in this period than any time in our history." 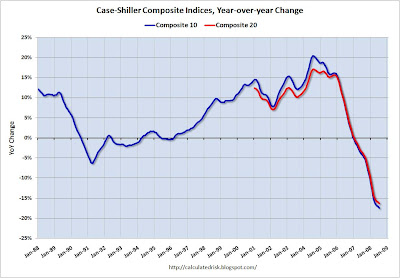 As those prices have dropped people have cut back on their spending.

John Luc has seen how housing problems bleed into the broader economy. Mr. Luc is the 36-year-old manager of Homestore Furniture in Ontario, a middle-class community 40 miles east of Los Angeles and one of the centers of the housing bust. Since last year, retail sales have fallen, while unemployment and office vacancies have soared. Eighteen months ago, he watched a nearby Levitz furniture store close down in a bankruptcy sale. Since then, he said, the few buyers who've visited his store ask for discounts. "Everybody negotiates," he says.

The other day, Mr. Luc was presiding over the store's going-out-of-business sale. Although the father of two young children expects to get a job at another Homestore outlet, he and his wife have checked their spending. He says he saves $50 or more each week by packing a lunch each day, and he makes coffee at home instead of stopping at Starbucks during his long commute. "I haven't gone into a steakhouse like a Black Angus for dinner in six to eight months," he says.

When 2/3 of economic growth comes from the spending described in the above graphs, you've got serious problems.
Posted by Unknown at 10:00:00 AM