Consumers are Reigning Spending In

As the U.S. economy entered into crisis mode in September, so did the retail sector, ramping up discounts and special offers to entice reluctant shoppers.

But the retailers who reported September sales results Wednesday -- with the exception of Wal-Mart Stores Inc. and other discounters -- are indicating the promotions hardly helped. Many retailers reported worse-than-expected declines, with some -- such as Target Corp. and J.C. Penney Co. --- issuing downbeat estimates for the quarter.

For the most part, the discount sector has been the only one to perform well amid recent economic troubles. Shoppers increasingly have been turning to warehouse and big-box discounters as they try to get the most for their money. Most other sectors have been suffering as shoppers continue to pull back on discretionary items, despite retailers' efforts to lure the bargain-hungry shoppers with greater discounts.

A rise in discount sales at the expense of all other stores is a bad development. It's worse when you consider that 70% of US growth comes from consumer spending. 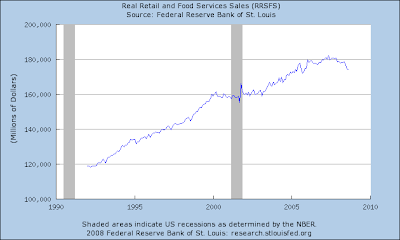 The simple line chart tells us that real retail sales (inflation-adjusted) have been stalling for some time). 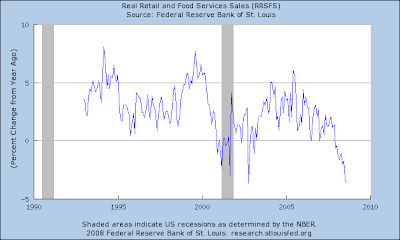 The year over year percentage change shows that retail sales have been dropping hard for some time.

The bottom line is the consumer is definitely pulling in his spending.
Posted by Unknown at 1:30:00 PM