The Midwest floods are raising the inflationary tide rippling through the nation's supermarkets and restaurants -- and meat prices may soon start rising along with prices for bread, eggs and breakfast cereals.

Economists are again raising their forecasts of how much food prices will climb, and for how long, because heavy rains have washed out millions of acres of prime farmland at a time when soaring demand is draining U.S. grain supplies to low levels.

Ms. Boal said Monday she expects U.S. food prices to climb between 7% and 9% this year, and to continue rising in 2009. The government's Consumer Price Index for all food rose 4% in 2007 after increasing at a 2.4% annual rate during the two years before that.

Paul Prentice, president of Farm Sector Economics in Colorado Springs, Colo., Monday raised his food CPI forecasts for 2008 and 2009 by 1.5 percentage points to 7% and 7.4%, respectively.

Likewise, Michael Swanson, an economist at Wells Fargo & Co., said Monday he expects food prices to climb 5% to 7% next year, compared with his forecast for a 6% rise in food prices this year.

This shouldn't surprise anybody. With the Midwest -- the US' (and the world's) breadbasket) flooding, we're looking at the possibility of higher food prices. Let's go to the charts to see how this is playing out: On the long-term chart, notice that agricultural prices formed a pennant pattern over the last few months. But since the flooding started in the Midwest prices have moved out of the pennant pattern and rallied higher. 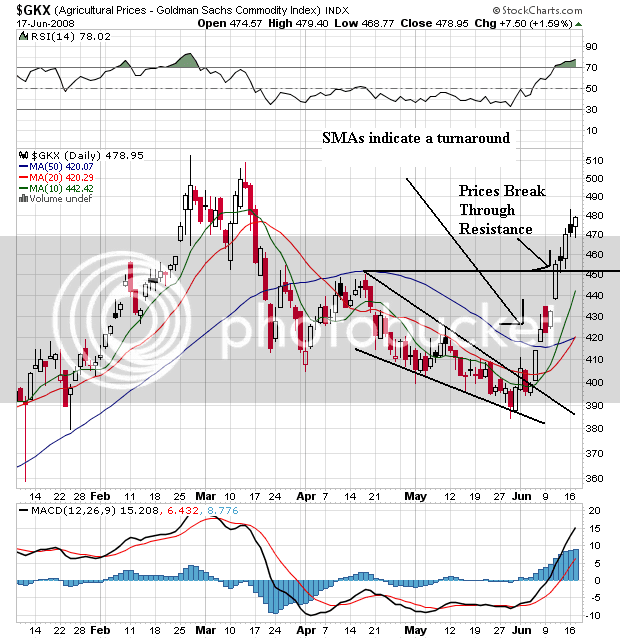 -- Prices have moved through the SMAs

Throughout the day I'll be focusing on agricultural commodities.
Posted by Unknown at 5:35:00 AM