We're Nowhere Near A Bottom in Housing

What should prospective real estate investors be watching to catch the inevitable upturn?

Sales and home construction have to stop falling, but that's only a first step, analysts say. The glut of unsold housing has to come down sharply before prices can bottom. And like the stock market, price is often your best indicator about real estate's direction.

Real estate slumps are usually local affairs, reflecting natural disasters or regional economic troubles. But the subprime lending crisis has resulted in the first nationwide home-price decline since the Depression by some measures.

States where sales, construction and prices rose most during the lax lending era will take longest to recover, analysts say. Many are located in the West, such as Arizona, Nevada and California.

The last time Western states suffered a real estate slump was in the late '80s and early '90s after the savings and loan crisis and Federal Reserve rate hikes choked off credit.

Builders have slashed housing starts by 55% from their January 2006 top. Total unsold new properties have fallen. But that's been overwhelmed by weaker sales and foreclosed homes flooding the market.

Unsold existing homes soared to 11.2 months' worth at the April sales pace, NAR said. The inventory ratio for single-family homes was the highest since 1985.

"You need to get that down to a five-month range for prices to stabilize," Wheaton said.

Economics is not rocket science; it's actually a very simple, common-sense affair after you cut through all the damn noise and spin. Too much of something means the price of that something will go down. That means we've got a huge problem for home prices (graph is from Calculated Risk): 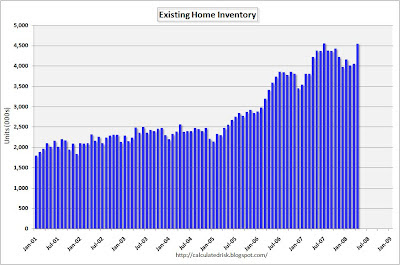 In addition, the months of available supply number is spiking as well (graph is from Calculated Risk): 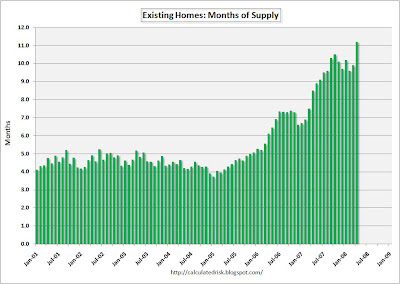 And as a result of all that inventory, prices are dropping (from the Big Picture): 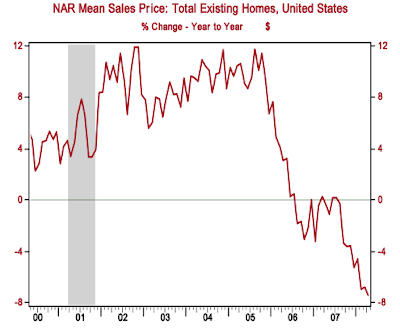 Also consider this news from today:

Prices of single-family homes plunged a record 14.1 percent in the first quarter from a year earlier, marking a pace five times faster than the last housing recession, according to the Standard & Poor's/Case Shiller national home price index reported on Tuesday.

The S&P/Case Shiller composite index of 20 metropolitan areas fell 2.2 percent in March from February and plummeted a record 14.4 percent from March 2007.

Economists expected prices for the 20-city index to fall 2.0 percent on month and 14.0 percent from a year earlier, according to the median forecast in a Reuters survey.

"There are very few silver linings that one can see in the data," David Blitzer, chairman of S&P's index committee, said in a statement.

Sales of newly constructed single-family homes rose 3.3 percent in April to a 526,000 annual rate but they were down 42 percent from a year ago, which was the largest year-over-year drop in nearly 27 years, government data on Tuesday showed.

And who is going to buy these homes?

Consumer confidence is low, as is 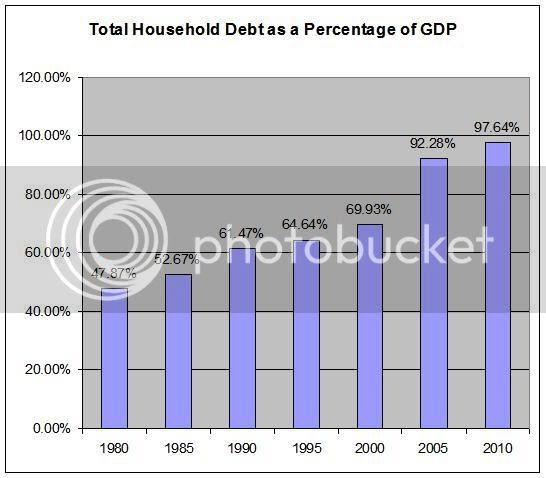 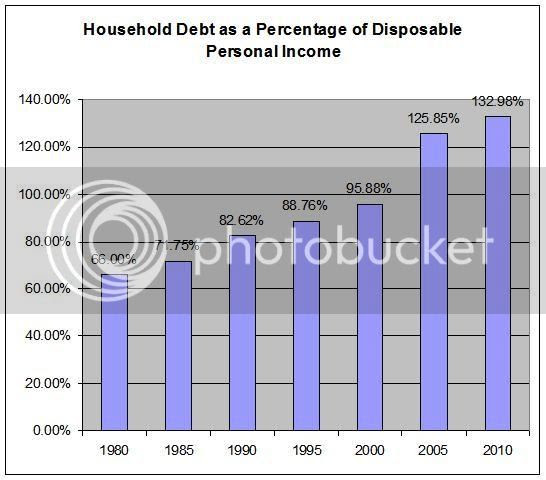 And consumers have already taken on as much debt as they can handle.

So -- anyone calling a bottom in housing is completely ignoring the fundamentals.

-- Consumers already have a ton of mortgage debt on their books, leading to