US Gasoline Consumption Down

From the Kansas City Star:

Gas consumption so far this year is down about 0.2 percent compared to last year, according to the Energy Information Administration. The federal agency is predicting that gasoline demand will be down 0.4 percent this summer and 0.3 percent for the year.

That may not sound like much, but it would be the first time since 1991 that there’s been a decline in annual gas consumption. And it would be only the eighth year since 1951 in which demand for gasoline has declined.

The federal agency noted that the decline was occurring in part because of a slowing economy. But it also said that higher gas prices were having an effect on demand.

“Sustained higher gasoline prices are beginning to show up in lower gasoline consumption,” said Tancred Lidderdale, an analyst for the Energy Information Administration.

Both gasoline and diesel prices are now at record levels.

Here are two charts from This Week in Petroleum to show where retail prices are:

Notice that instead of falling in the winter, both gas and diesel prices remained at high levels. I think this is an important contributing factor to the slowdown that occurred in the fourth quarter. 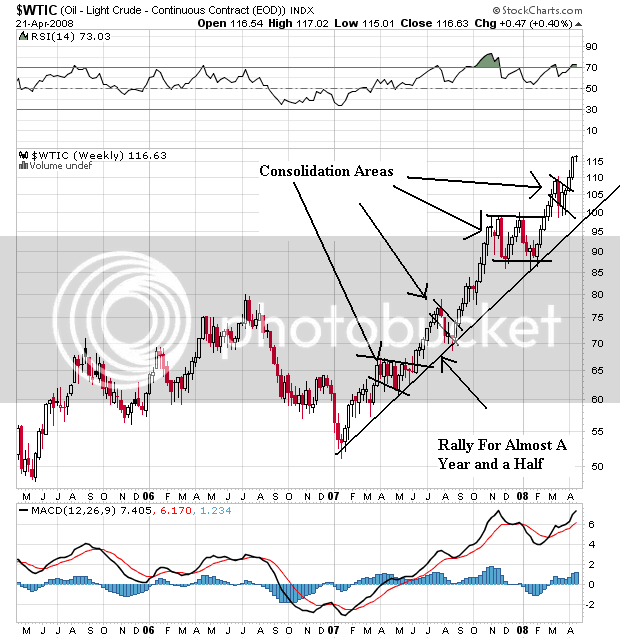 Oil has been in a rally for almost a year and a half. Notice the market has continually advanced through previous resistance levels, consolidated gains and then moved higher.


However, we're moving into the summer driving season when demand typically increases: Finally, I have two words: India and China. Simply put, US demand is no longer the only driving force of the oil market. There are now over 2 billion more people who've seen their standard of living increase.
Posted by Unknown at 6:44:00 AM