The Financialization of the US Economy

Over at the Huffington Post, Kevin Phillips has a great piece that shows the length, width and depth of finance in the US economy. Consider the following:

Over the last five years, financial services has reached a swollen 20-21% of U.S. GDP -- the largest sector of the private economy.

Manufacturing led financial services by 2:1 back in the 1970s, but by 2006 beaten goods production had shrunk to just 12% of GDP.

During Greenspan's 1987-2005 tenure, the sum of public and private debt in the United States quadrupled from just over $10 trillion to $43 trillion.

One of the main topics I have written about over the last few years is the incredible amount of debt build-up that has occurred in the US economy. Whether it's the over $9 trillion total of US government debt (roughly 64% of US GDP) or the mammoth increase in household debt (which is almost as much as total US GDP and over 130% of disposable income at the national level) we're literally swimming in red ink in this country.

The main problem I have with this development is a basic fact of debt: you have to pay it back. Here's why that's an issue.

For the 4Q82 to 3Q90 expansion the median quarterly growth rate was 3.85%. Here's a chart of the 10-year Treasuries yield over the same time: 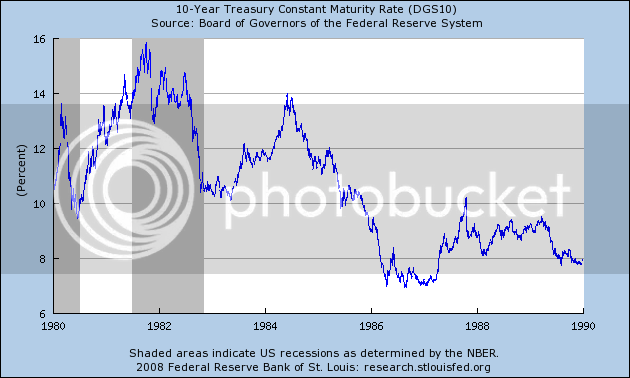 Notice at best the Federal government was paying 7% for 3.85% economic growth. That just makes no sense. But everyone is acting as though the Federal debt is no big deal.

Over the latest expansion (4Q01 to present) we've seen a 2.7% median quarterly growth rate. Over the same time the US has added a little over $3 trillion to the total national debt. And here's a chart of the interest rate on the 10-year Treasury: 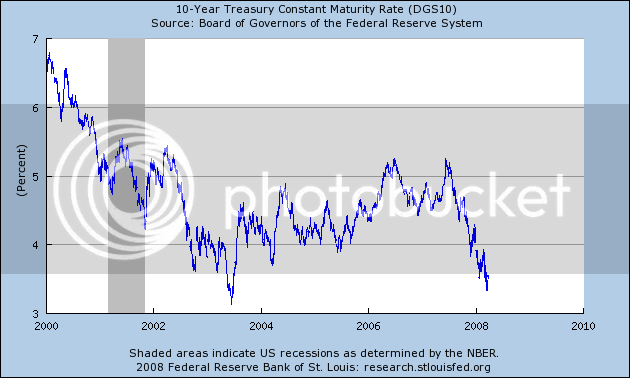 Here's the point (and I made this above as well). You have to pay back debt at some point. Yes, you can refinance it etc.... but that doesn't eliminate the basic problem -- you still owe the money. And at some point, that's going to bite is hard.
Posted by Unknown at 8:24:00 AM