How Bad Will Employment Get?

Let's start with a graph from the St. Loius Federal Reserve. This is a chart of the percentage change in employment from a year ago. 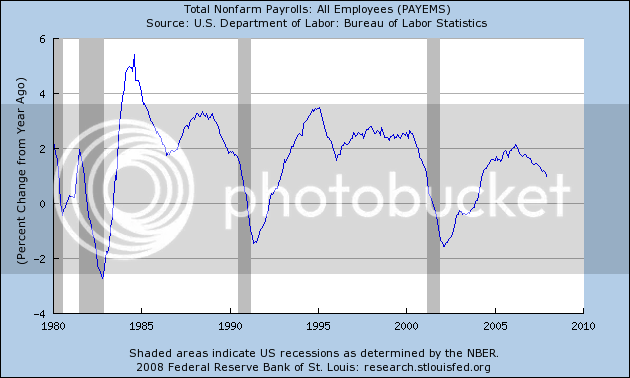 Notice the job growth has been extremely weak, especially compared to the last two expansions. That leads to an important question: assuming an economic slowdown, how bad will employment become?

"If payrolls are leaner than they usually are when the economy softens, then companies may not have either the need or the scope to lay off workers en masse," said Goldman Sachs economist Ed McKelvey in a recent note.

December's unemployment rate ticked up to 5% from 4.7% in November, but economists disagree on whether it will get worse, and to what degree. David Rosenberg, an economist at Merrill Lynch, said in a note Tuesday that he expects job losses this year to total 2.5 million, similar to cuts in the last recession, and for the jobless rate to hit 5.75% by year end.

Others are more sanguine. "I'm not betting on a string of monthly job losses," said Richard DeKaser, chief economist at National City Corp. in Cleveland. He predicts the jobless rate will rise to 5.25% in the first half of the year and expects the weakest sectors to continue to be manufacturing, construction and financial services.

Rosenberg -- who is a top-notch economist and someone who I have tremendous respect for -- is arguing for a more "traditional" lay-off scenario. From his perspective, he thinks that employers will slash and burn their payrolls to save money.

But consider the weakness of the job picture for this expansion. When you look at the chart from the St. Louis Fed, notice employers delayed hiring during this expansion far longer than before. In addition, notice the year-over-year figure topped out at a lower rate than the previous two expansions, indicating that even when the economy was rolling along pretty well, employers were still cautious about hiring. Instead, they made do with less. Here is a chart of the year-over-year change in multifactor productivity from the St. Louis Fed: .....While a recession could change their minds, employers are reluctant to institute mass layoffs, which can result in the loss of skilled workers who are costly to replace when the economy improves, said John Silvia, chief economist at Wachovia Bank. Rather, many have put the brakes on hiring new workers in some or all of their operations. "A lot of firms have simply said the risks are too great to add workers," he said.

"If payrolls are leaner than they usually are when the economy softens, then companies may not have either the need or the scope to lay off workers en masse," said Goldman Sachs economist Ed McKelvey in a recent note.

Let me throw the following hypothesis out: employers were far more reluctant to hire this expansion. Instead, they hired less but increased their productivity more. As a result, their business models are now wedded to a higher-productivity/lower workers total model. This means businesses can't cut jobs like they would in previous expansions because they would lose valuable employees. In addition, this would negatively impact the increased productivity of their respective businesses, which would have a ripple effect through their respective business.

It's still a hypothesis, but an interesting one.
Posted by Unknown at 6:58:00 AM