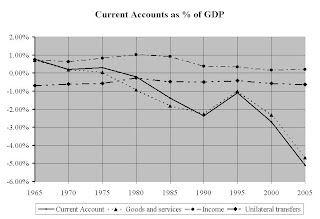 This post could be seen as following up on a number of good posts connected to the state of play with the most recent current accounts numbers and events in US$ foreign exchange markets. However, that would be an illusion ... indeed, as you can see above, "2006" is not even in view here. The focus here is on the long term.

And I will stress, this is the long term not the long run. The long run is about the logical implications if we take hold the current framework of technology and institutions constant and let all short run market fluctuations to run their course. The long term is about the long lasting, durable impacts of historical processes that take time to unfold, which most definitely involves technology and institutions not remaining constant.

However, I am going to try to avoid dwelling on this kind of academic distinction and focus on the historical process at hand ... and before this week's numbers had been released, I chose the Balance of Payments as a topic. Why? ... well, you'll see why.

That figure up there gives 5-year sequential averages, ending in the listed year, for the three main "memorandum item" summaries listed in the US Balance of Payments. The numbers are from the Bureau of Economic Analysis. They are percents, because they are current-dollar values from the U.S. International Accounts Data (Table 1. U.S. International Transactions), divided by annual US current GDP.

This is sequential 5 year averages precisely because I want to take the long view. The solid line shows the overall current account balance, made up of the trade balance (goods and service), income balance and balance on unilateral transfers.

As you can see, while there are interesting stories in the last two parts, the big splash headline story is all in the trade deficit.

This is what a trade deficit blow-out looks like. Just in case someone asks you for an example, you can send them that graph. And remember -- this is a 5 year sequential average,. The actual values in current US$:
So it is both very bad, and getting worse at a rapid rate.

The two main cross-sections for this are by industry and by country or region that we trade with, and I plan to look at each of those in more detail in upcoming weeks. However, right now I want to think a bit about what this massive trade deficit blow out means for the overall state of the USofAmerican Economy.

First there's savings. Gross new saving in a year is the same as net assets created by the main sectors of the economy: consumer borrowing, business investment in newly produced assets (eg, equipment), government borrowing from the private sector (domestic finance of the budget deficit), and our net private lending abroad.

Consumers going deeper into debt are "dissaving", so that when we look at net savings, growth in consumer debt has already been netted out.

Or, from an income-flow perspective, the Saving can not take place because the income from which to save flowed overseas instead of reciruclating inside the US.

And since the trade deficit is getting very bad, very quickly, saving in this country is collapsing (US savings improves, but still negative). Household savings rates are already negative, so that the net saving that is taking place is restricted to growth in corporate retained earnings. It is an open question how much "negative saving" (net borrowing) by households the financial sector can sustain ... but if we begin to reach a limit there, attention will shift to the financial footing of US-based corporations.

And for more and more goods and services, we ain't the ones doing it. When the doing occurs overseas, that is where the gains from technological progress occurs. And those productivity gains are the bedrock foundation for providing ongoing real income growth ... growth in terms of the purchasing power of the normal hourly wage.

When industry gains in productivity, that increases the ability of the economy as a whole to meet government demands for goods and services without inflation. And when those government demands include a substantial amount of government investment spending, it both lays the foundation for new rounds of learning by doing in those industries, but also helps to spread opportunities for productivity gains in other parts of the economy.

Social Insurance and the Dependency Ratio

An issue that we will be facing over the next twenty years, as the Baby Boomer generation retires, is the dependency ratio. How many dependents are there for each full time worker (or equivalent)?

Many African nations have long had very high dependency ratios, with children representing almost all the dependents. Family planning and other population control measures were the standard policies offered to cope with the problem. However the dependency problem on the continent of Africa has become even more severe in the past decade due to the HIV AIDS epidemic.

The problem is supporting dependents out of the goods and services produced by workers and providing adequate rewards to those workers at the same time.

However, for national retirement schemes like Social Security, there has long been an upside that helps balance this out. When Social Security checks are spent, that provides a stimulus to the economy. As long as we have a technologically progressive economy, boosting production leads to productivity gains, and productivity gains makes it easier to share income between workers and dependents ... because there is more to go around.

Why doesn't the same happen in many African nations? There is a clear problem: a very large share of the goods bought are imported, so that the productivity gains from learning by doing are not happening within the African nation. Instead, they are happening overseas, primarily in Europe, the US, Japan and China.

And there's the problem: the trade deficit blow-out means that we are becoming less and less like the US of the 1950's, and more and more like a developing nation in Africa. We are becoming more and more dependent on imports. And so the extra income paid for the imports by Social Security recipients flows overseas, and the productivity gains occur over there.

The dependency ratio will rise, inexorably. So this is a problem that will grow even faster than the trade deficit itself. That is, the problem is getting more serious per dollar of trade deficit, and we have a trade deficit blowout.

Waddya We Do About It?

I'm not going to set out any policy proposals today. That would be premature, before I have a closer look at the cross-sections by industry and by trading relationship. But the general menu that policy proposals will be taken from include:
And without giving the game away prematurely, four of those five those options will almost certainly show up. I'm not a big fan of non-tarriff barriers to trade, because they tend to create industries that rely on political favors for their profits, rather than relying on productivity gains. But all four of the others are going to show up, in one form or another.