Dollar Rebounds For the Week

I mentioned we should watch the dollar at the beginning of the week. The dollar rebounded, as this chart shows. 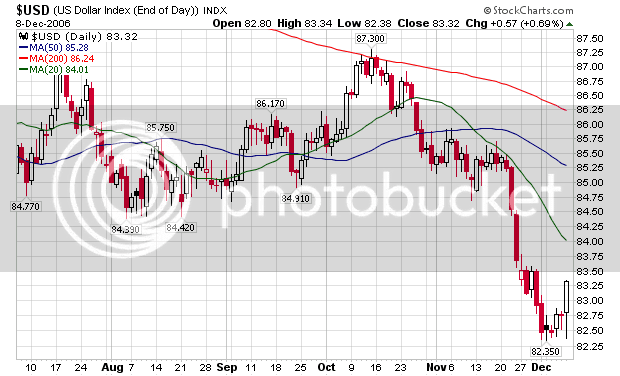 The dollar rose after data released this afternoon showed solid US jobs growth in November.

Data from the Labor Department showed US non-farm payrolls rose by 132,000 in November, above market expectations for a gain of around 100,000. Revisions to back data were broadly positive, with October's payrolls revised down to show a gain of 79,000 from the previous estimate of 92,000, but September's reading was revised up substantially to 203,000 from 148,000 previously.

Friday's jobs number gave a boost to the soft landing economists, who are arguing we'll see a slowdown without a recession.

Earlier in the week, the dollar index traded in a very narrow range from $82.50 to $82.75. Narrow trading ranges are signs of accumulation and/or distribution, where supply and demand are roughly equal.

In other words, dollar traders were doing two things this week. First, they were consolidating their positions after the late November sell-off. Secondly, traders were waiting for the jobs report to see what it would imply about the future direction of US interest rates.

So, where do we go from here? The last month of trading has made (roughly) $82.50 a key short-term support area and (roughly) $83.50 a key resistance area. Any move and close above or below these respective levels will possibly indicate a move. However, if prices remain between the above mentioned levels, the dollar index will again be consolidating its respective gains as traders await more clues as to where they sould allocate their money.
Posted by Unknown at 8:58:00 AM