Coronavirus dashboard for March 28: I’ll take the “under” for the severity of any BA.2 wave

Very few US States reported over the weekend. The decline in new cases has stalled at roughly 30,000 per day. Deaths are still declining, and currently just below 800 per day.

Since the BA.2 variant continues to generate new headlines, with just about everybody warning of a new wave in the US, let’s take a look at what actually happened in Europe (and remember: there was no new BA.2 wave in South Africa, the Philippines, India, and a number of EU countries where BA.2 took over from BA.1 early).

BA.2 started a new wave in Europe beginning in the last week of February through the first week of March: 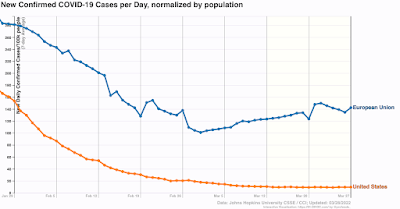 A week or two ago, the poster children for Europe’s big outbreak included countries like the UK, Germany, Belgium, Austria, the Netherlands, and Greece. Here’s what they (plus the other major countries of Italy and Spain, plus Portugal), look like now: 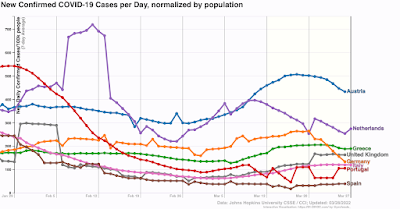 Declines everywhere. Italy just peaked earlier during last week, and the UK probably did as well (there was a data dump last Monday which will go out of the average tomorrow).

Here is where BA.2 is still increasing in Europe: 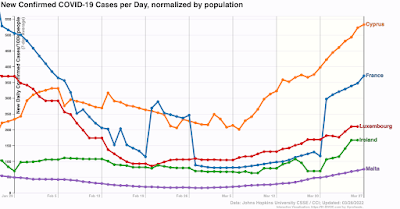 In short, four weeks after Europe’s BA.2 wave started, cases are already declining everywhere except France, Ireland, Luxembourg, Cyprus, and Malta. The last 4 countries have a combined population of 6.5 million. There may be a few small countries I’ve missed, but they wouldn’t materially affect the result.

Last Tuesday, the CDC reported that the BA.2 variant was a majority of new cases in the Northeastern Census region, 40% along the West coast and the upper Midwest, and 30% or below everywhere else. Here’s what cases in the US Census regions look like as of now: 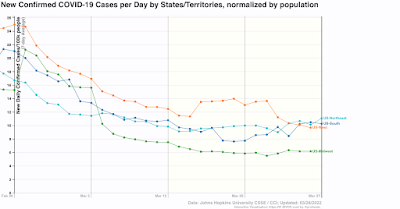 Remember that the appropriate comparison with the CDC report is cases one week ago. Since then, the percentage of BA.2 infections has probably risen by about 15% (but we won’t know until at least tomorrow). One week ago cases were flat to declining everywhere except for the Northeast, where they were up 10%. Cases are still declining in the West, flat in the Midwest, and rising in the South and Northeast now.

For the EU as a whole, cases rose 50% from their bottom since then, and appear to have peaked in the last week. In the US, that would translate to 45,000 cases per day in about 2.5-3 weeks. The worst case countries saw their cases roughly double, which in the US would be 60,000. I’m more inclined to go with the former estimate than the latter.

And since, as of now, there is no new variant on the horizon, I expect a fast decline from peak just as we are seeing in the European countries now.