The 2020 Presidential and Senate nowcasts: in 2020 the “blue wall” looks very likely to hold, but expect surprises in the Senate

At only 9 days from Election Day, the polls, while actually nowcasts rather than forecasts, are probably less than 1.75% off the final result. All of the fundamentals of the election are already “baked into the cake,” and it appears Trump’s attempt at an “October surprise” has fizzled. I’ve been suggesting for several months that some GOP voters would likely  “come home” in the closing days of the election, and that appears to be developing, with national polls generally tightening slightly.

Also, to reiterate what I wrote last week, unlike 2016, Biden’s lead been at very least steady for over 4 full months: 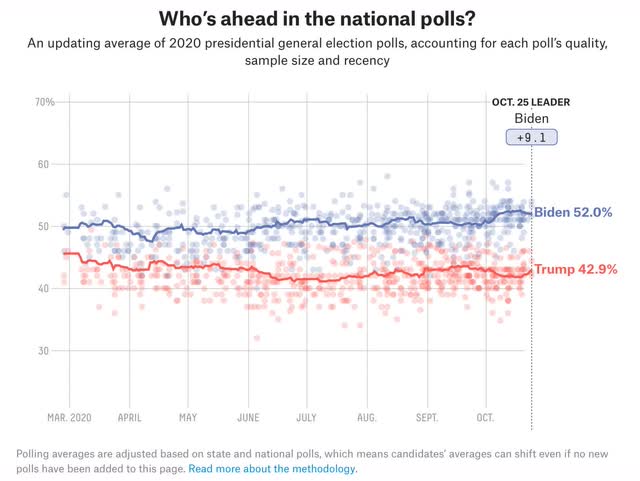 Not only that, but as of yesterday almost 42% of the total number of ballots compared with 2016 have already been cast this year: 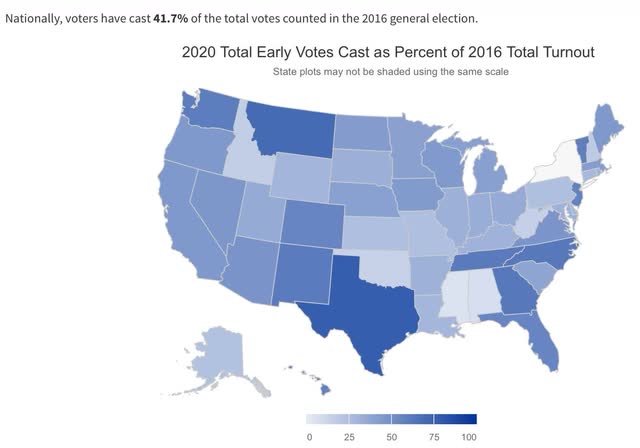 New York has just started early voting. This number should easily top 50% by Election Day. For these voters, the race is already over. Those votes are going to stay put.

Finally, the Senate elections show very little variation from Presidential polling in the affected States. Only in tight Presidential swing States does it look like the Senate results might turn out differently.

So here is this week’s penultimate update.

Trump has continued to have a bad October, as in the past 2+ weeks since the first debate and his own diagnosis of COVID-19, his approval rating has declined. It dropped by another -0.2% this week to 42.6, although his disapproval rate also declined -0.6% to 53.6%. This is still within the normal range of approval going back over 3.5 years:

A reminder: next week I will also include a map that includes any State with a 1%+ differential to “lean Democrat/GOP” category. 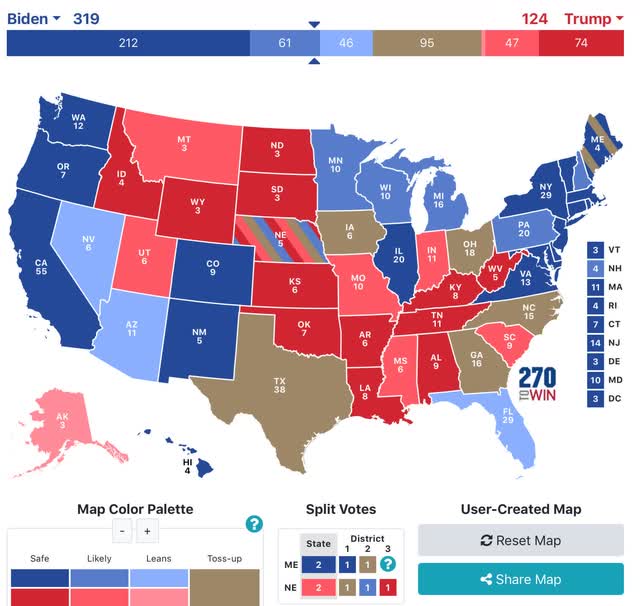 The only change of note this week was that Nevada fell just barely into the “lean Biden” category, so that Biden’s “solid” plus “likely” Electoral College votes declined by 6 to 273, meaning that Biden still doesn’t need Florida or Arizona in order to win. Three Trump States, Alaska, Nebraska, and Utah, tightened to “lean” and “likely” Trump, respectively, while Kansas moved from “likely” to “solid” Trump.

Biden’s support improved to or remained at 50%+ in Michigan, Minnesota, Nevada, New Hampshire, Pennsylvania, and Wisconsin. Florida and North Carolina were 49%+. Only Arizona declined below 49%. This makes it extremely hard for Trump to mount a successful comeback in those States.
Here is Florida, showing some tightening. Arizona is similar: 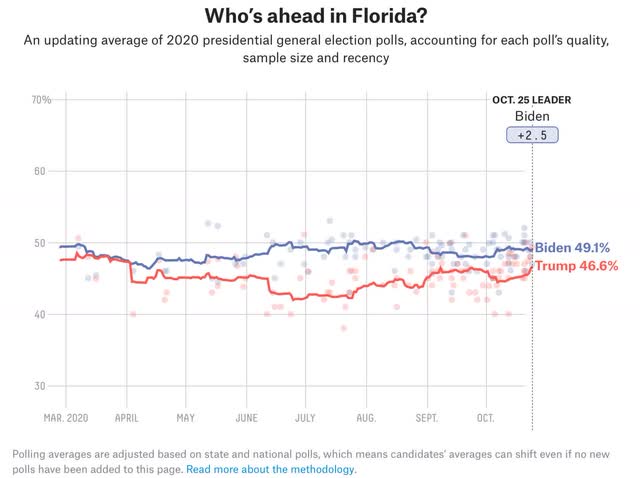 But perhaps more importantly, here is Pennsylvania. Although I won’t post the graphs, Minnesota, Wisconsin, and Michigan are similar: 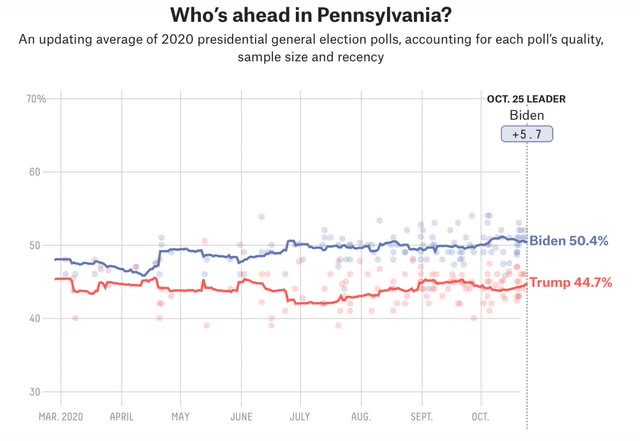 Biden’s lead in these States has been durable, and he has an actual majority. In short, even though we are still 9 days away from the actual “Election Day,” I will boldly State that most observers - probably traumatized by 2016 - have been too cautious this year. The “blue wall” is extremely likely to hold. And if it does, Trump’s chances of victory are foreclosed.

Turing to the Senate, there were 6 changes this week, 4 favoring Democrats and 2 favoring the GOP. Alaska and Georgia’s special election both moved back from lean GOP to toss-up. Colorado moved from likely to solid Democrat. Kentucky moved from solid to likely GOP. On the other hand, Iowa moved from lean Democrat to toss-up and Kansas moved from toss-up to lean GOP:

At current polling, if Democrats win all those seats in which they are favored, they will have 50 Senate seats, down from 51 last week. The number of  races now rated “toss-up” increased to 7.  It remains likely that the Democrats wind up with a majority in the next Senate, although my in-box is filling up with pleas that Mitch McConnell’s superPAC has begun to deploy nuclear levels of spending in the tightest races.
In sum, I am increasingly confident of a Biden victory, perhaps a decisive one, while the Senate makes me very nervous. It is at this level where I think we will see a number of surprises, perhaps in both directions.