Q3 GDP points away from a producer-led recession

In the past 60 years, most recessions have been consumer-led, and have been preceded by both increases in mortgage rates in excess of 2% and/or increases in the price of gas by 40% or more per year. Usually the Fed has been hiking rates by 2% or more, and the change in YoY inflation has also increased by 2% or more. Housing starts typically went down by 25% or more, and that fed through the rest of the economy over the next 12-24 months. The bottom line is that consumer budgets became stressed, so they cut back on spending. When real consumer spending per capita declined, a recession began.

The most notable exception was the recession of 2001. Housing went down by a maximum of 12.5%, and picked back up before the recession began. Real personal consumption expenditures were flat to slowly rising throughout the recession, except for immediately after the 9/11 attacks.

What went down in 2001 were corporate profits, which fell by 20% or more adjusted by unit labor costs.

This leads me to the current situation. Mortgage rates went up by only 1.5% at the most between 2016 and 2018. While the Fed did hike rates over 2% in total, the hikes were very gradual. The change in YoY inflation never increased more than 1.2%. Oil prices did rise more than 40% YoY for most of 2018, but from very low levels, and for the past 12 months have *decreased* on a YoY basis by an average of 20%. Real wages, which were flat for most of 2016 and through 2017, have increased pretty consistently since early 2018 as well. Real retail sales and real consumption expenditures have risen to new highs.

In short, as I have said a number of time, “the consumer is alright.” There is no sign of a cutback in real per capita consumer spending that has led nearly all recessions. If a recession is going to happen now, it would have to be producer-led, like 2001. And that means, a substantial decline in corporate profits would happen first.

Which leads me to the point of today’s post. As of Friday, according to FactSet, Q3 corporate earnings are only 2% below their Q4 2018 peak, and they never went down more than 10%: 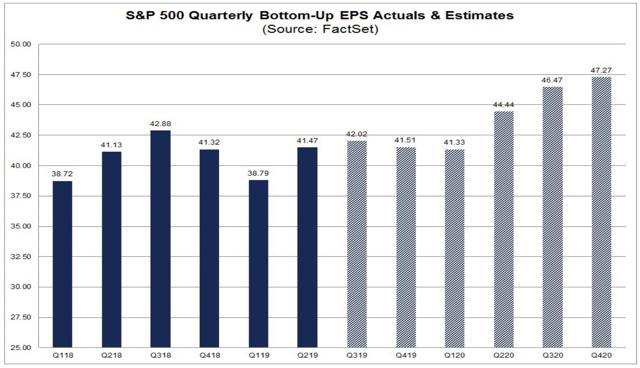 Further, the first estimate of Q3 GDP was released last week. Both long leading indicators in that report, real private residential investment and proprietors’ income, increased. In other words, no sign there of the kind of producer-led turndown that we would need to see before a 2001-style recession were to begin.

I discussed the Q3 GDP report with accompanying graphs last Friday at Seeking Alpha. As usual, clicking over and reading should be educational for you as well as rewarding me for my efforts.