Just a quick note on this morning’s economic data.

First, new home sales improved in December from October and November’s relatively dismal pace (blue in the graph below). We are back to the levels of last summer, but still down from one year ago (including as the more stable, less noisy 3-month rolling average)(red shows prices, which have been moving in tandem with sales during this expansion):

This is of a piece with yesterday’s December permits and starts data. Both metrics are down, but look likely to bottom within a few months in response to lower long term interest rates.

Second, the ISM services, or non-manufacturing, index came in at a very good 59.7. Here is that metric for this expansion (via Briefing.com): 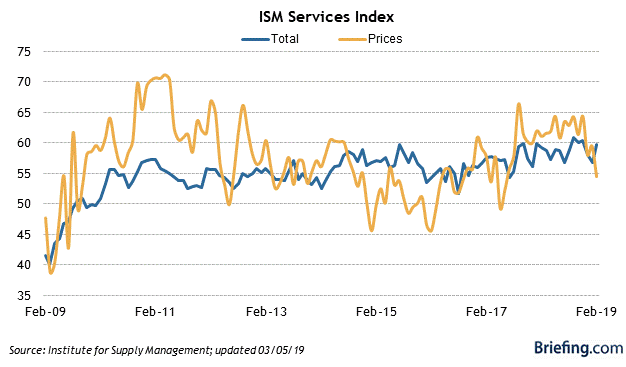 As you can see, this metric is doing very well.

ISM doesn’t let FRED publish their data any more, but fortunately there are long-term graphs since the beginning of the series 20 years ago that are still around. Here’s one from 5 years ago, comparing services with manufacturing:

The important thing here is that, unlike the manufacturing index, which is a leading indicator, services are a coincident, and possibly even lagging indicator (look at 2008). If and when ISM services slips to 50, that will probably mean that a recession is imminent or has already started.  But no worries for the moment!