The preponderance of evidence, based on this morning's report on housing permits and starts, is that increased interest rates and continuing increased prices are beginning to take a bite out of the market.

First of all, let's take a look at single family permits -- the most reliable, least volatile of all the measures -- (red, left scale) and total permits (blue, right scale):

Both declined this month, but more importantly, both made 7 month lows. Outside of the expiration of the housing stimulus way back in 2010, this is the first time that single family permits have made this significant a decline -- off about 4% -- during this expansion.

At the same time, since the peaks for single family homes were only in February, and overall in March, not enough time has passed to be confident that this was the peak.

This includes on a three month rolling basis, which cuts down on volatility.

But permits lead starts, and in the last eight months there has been an increased backlog of housing permits which have not yet translated into starts. This month that number declined slightly to its lowest since December: 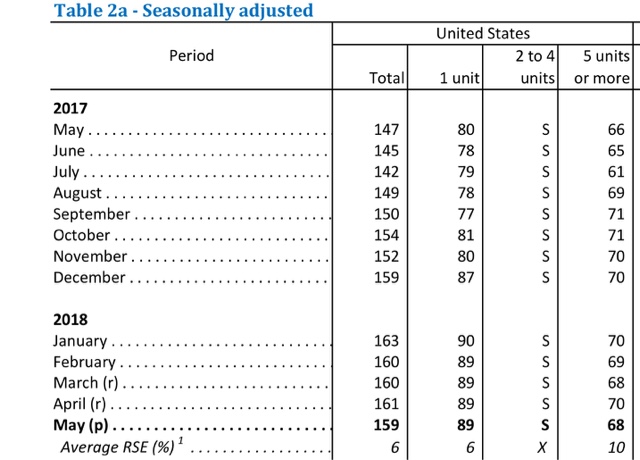 So it is not a surprise that starts have continued to rise even though permits have declined in the last several months.

At the same time, it's worth noting that, even though the economy didn't roll over, in two of the last 3 times -- 1994 and 2004 -- where there was a similar decline in permits outside of recessions, real GDP did slow down:

Should single family permits fail to make a new high for at least one more month, and should the decline be over 5% from peak, I will switch their rating from positive to neutral. And, while the evidence is by no means conclusive, I would say the preponderance of the evidence is that housing is slowing down, and that will have an effect on the economy over the next 6 - 12 months.
Posted by New Deal democrat at 9:03:00 AM