Is raising wages becoming a taboo?


Yesterday I noted that, while the problem of lower labor market participation among the working age population hasn't *entirely* resolved, it is getting close to resolving due to the surge in entry into the jobs market in the last two years. As the graph below shows, not only has the prime age population grown by about 2 million in the last 2.5 years (blue), but nearly an additional 2 million (1.5% of 125 million) have entered the labor force (red):

But,while in accord with the last two expansions, nominal wage growth bottomed out once the U6 underemployment rate fell to roughly 9%, for nonsupervisory workers, it has languished at about 2.5%:

This is less than the roughly 4.5% peaks in the past 3 expansions.

MONOPONY VS. SKITTISHNESS VS. TABOO

One explanation is in the first graph above itself. All else being equal, even accounting for population growth, there are 2,000,000 more candidates for jobs in the prime age labor force than there were 30 months ago. More competition for jobs should act to hold down compensation.

But recently another explanation has been written about at length: monopsony in the labor market. In more plain english, this is a monopoly or at least oligopoly on the demand side for labor. Increased market power to hold down wages, it is argued, is having that exact effect:

[I]n recent years, economists have discovered another source: the growth of the labor market power of employers — namely, their power to dictate, and hence suppress, wages.....[I]n many areas of rural America, [where] large-scale employers that dominate their local economies[, w]orkers can either choose to take the jobs on offer or incur the turmoil of moving elsewhere. Companies can and do take advantage of this leverage.

Yet another source of labor market power are so-called noncompete agreements .... These agreements prohibit workers who leave a job from working for a competitor of their former employer.

Almost a quarter of all workers report that their current employer or a former employer forced them to sign a noncompete clause.....[S]tudies have found that employer concentration has been increasing over time and that this concentration is associated with lower wages across labor markets.

....{Monopsonistic f]irms [which pay less than "competitive" wages] bear the loss in workers (and resulting lowered sales)  in exchange for the higher profits made off the workers who do not quit.

While the evidence appears compelling that employer market power is having *an* effect of holding down wages, I am not sure at all that it is the *primary* driver of low wages.
At least two other explanations for employers refusing to raise wages come to mind:


Let me explain each.
Suppose I am an employer in competition with others. Suppose further, however, that I am skeptical that the current "good times" are going to last. After all, since 2000 there have only been about 4 years at most (2005-07 and 2017) where the economy has seemed to be operating at close to full throttle.  If I raise wages now, I will attract more workers, but then when the good times end, I will be stuck with a higher paid workforce than my competitors who haven't raised wages. If I think that "bad times" are likely to exist more often than "good times" in the foreseeable future, then I might hold back on increasing my labor costs during the good times, leaving some additional profits on the table, because that will be more than offset by having relatively lowers costs during the bad times.
By an economic taboo, I mean a decision to leave profits on the table because they conflict with an even higher priority held by the employer (e.g., I refuse to higher a clearly more qualified black job applicant because I am a racist). Let's suppose that I am an employer who *does* believe that the good times are likely to last, BUT I also believe that people who come to work for me ought to be grateful to earn, say $10 per hour, and because of my firm ideological belief, I am not going to budge. If I am alone in my ideological belief, I will suffer. But if my ideological belief is shared on a widespread basis by my competitors and other businesses, I am *not* at a competitive disadvantage. Thus depressed wages may persist because raising wages has become a taboo,
USING THE JOLTS SURVEY TO DISCRIMINATE AMONG THE HYPOTHESES
So, how can we tell if the primary driver of employer decisions not to raise wages is monopsony, skittishness, or taboo?
The JOLTS survey appears to give us a good look at the likely answer. JOLTS measures job openings, actual hires, and quits, among other things. Let me show you how.
To begin with, if skittishness about the durability of a strong economy is the primary driver of lower wages, I would not expect those employers to even go looking for new employees to hire at higher wages. In other words, there wouldn't be an elevated number of job openings compared with actual hires, because skittish employers simply aren't in the market.
On the other hand, both in the cases of monopsony power and taboo, I *would* expect to see elevated job openings, as in either case those employers *do* want to hire new workers -- they just want to hire those workers at what they define as their "fair" price, And that is exactly what we see in the JOLTS data during this expansion compared with the last one:

That is pretty compelling evidence that it is not economic skittishness that is driving low wage growth.
Minneapolis Fed President Neel Kashkari appears to agree:

"Almost everywhere I go, businesses tell me they can’t find workers. I always ask them the same question: 'Are you raising wages?' Usually, the answer is ‘no.’ When you want more of something but won’t pay for it, that’s called ‘whining,’” he told the ninth Regional Economic Indicators Forum (REIF), founded and co-sponsored by National Bank of Commerce.  “Until you’re paying more, I know you’re not serious.”

So, how can we decide between the other two hypotheses? The Wall Street Journal (via Fundera) seems to think that smaller firms are offering bigger wage inducements:

The WSJ says small businesses across the country are increasing their wages at a faster rate than medium-size or even large firms. All industries with businesses made  up of 49 or fewer employees saw a pay bump of just over 1%.

But the evidence is anecdotal, not hard data.

Again, the JOLTS survey seems to provide an answer in two parts.
First, as mentioned in the monopsony piece above, such firms should have "higher profits made off the workers who do not quit."
So let's look at the "Quits rate" in the JOLTS survey:

Workers are quitting their jobs at virtually the same rate in this expansion as during the last one, during which wage growth was higher. There simply isn't a bigger pool of "workers who do not quit."
A second thing we ought to find, if monopsony is the primary driver of low wage growth, is that  bigger firms with market power ought to have unfilled job openings at a much higher rate than firms in small, more competitive labor markets. This is backed up by a scientific study:

[I[n a competitive labor market, such “shortages” [of hiring compared with job openings as measured in the JOLTS report] should dissipate as employers competitively bid up wages to fill their vacancies. But counter to this prediction, Rothstein (2015) finds no evidence that wages have grown faster in sectors with rising job openings. Instead, the failure of hiring and wage growth to keep pace with the rise in job openings is consistent with the incentives faced by firms in an imperfectly competitive labor market; it suggests that companies have a strong interest in hiring workers at their offered wages, but have resisted bidding up wages in order to expand their workforces (Abraham 2015).

As it happens, we are able to able to infer a comparison in Rothstein's metric between large and small firms.
Above I showed job openings (blue) vs. actual hires (red) in the JOLTS survey. The National Federation of Small Business conducts a similar survey among its members. Here are their graphs of job openings and actual hiring from their most recent report: 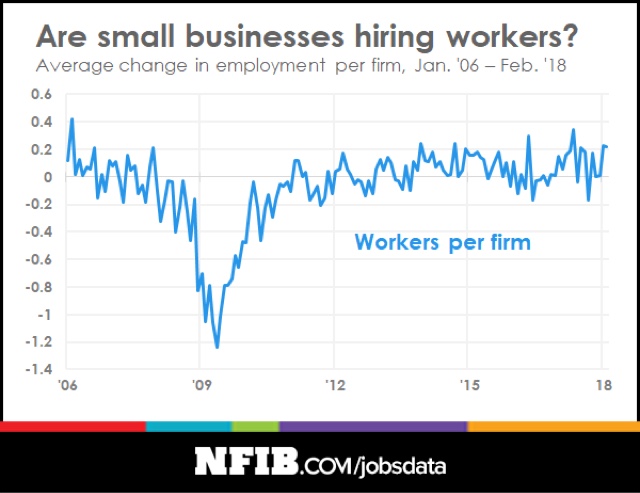 Small business owners clearly started singing "Happy Days are Here Again" on the day after the 2016 Presidential election.  And their job openings soared.
But their actual hires didn't. They are adding jobs at the same level as they did in 2014 and 2015. They are behaving as if they have a taboo against raising wages.
So in conclusion, while I have no doubt that the "monopsony" argument is measuring something real, I am more and more inclined to believe that raising wages is simply becoming an ideological taboo among businesses, a higher priority than maximizing net profits after costs.
Posted by New Deal democrat at 9:07:00 AM