At the end of last year, I highlighted 5 graphs to watch in 2015.  Let's look back one last time.

After a mini-surge at the end of January (light brown in the graph below) due to low mortgage rates (blue), refinancing applications fell back to their post-recession lows during spring. With a decrease in rates in summer and autumn, there was a small increase, but we are still nowhere near the level of refinancing we saw in 2010 and 2012.  Mortgage News Daily has the graph: 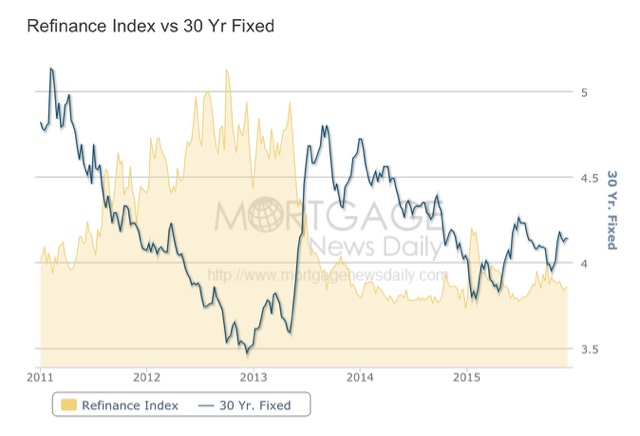 Over the last 35 years, refinancing debt at lower rates has been an important middle/working class strategy.  There is little room left for that strategy, and it looks like we have seen the low in rates for this expansion -- and possibly for this lifetime!  If the middle class makes more progress in real income, it will have to come from further decreases in consumer prices (if that is possible), or increases in wages.

Here is a graph of average hourly wages for nonsupervisory employees (red) compared with gas prices (blue) since the bottom in gas prices in  1999 (both series are normed to the same value as of November 2015): 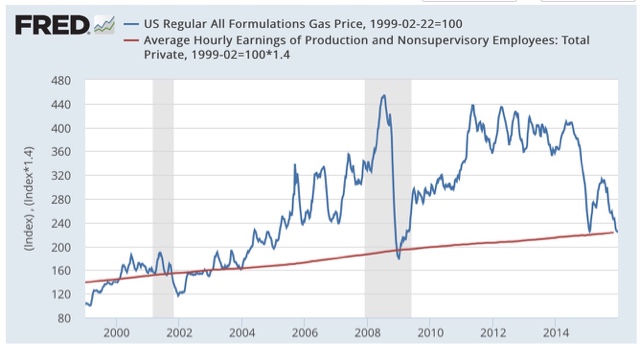 How long must a worker labor in order to buy a gallon of gas?  After skyrocketing in the lead-up to the Great Recession, gas prices collapsed, helping the consumer start to spend again on other things at the bottom of that recession.  The steep drop in gas prices late last year and again this year took us almost all the way back to that bottom.  In 1986 and 2006, at first consumers saved the money, but once they loosened their pursestrings, the economy responded. Consumer spending, particular on durables like houses and cars, is what is keeping this expansion going.

Next is a graph of part time workers for economic reasons expressed as a percentage of the labor force.  This is one of the big positive stories of the year.  Over the last 10 months, this has fallen by about 0.6% or 900,000: 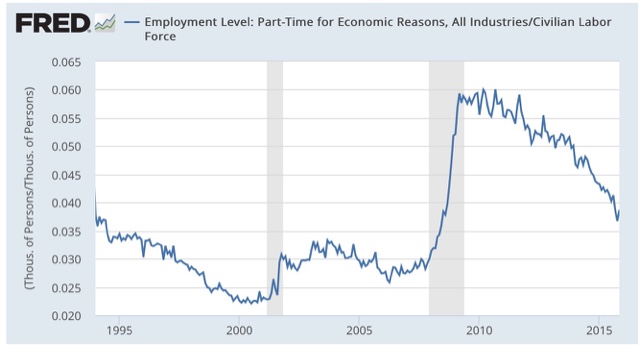 #2 Not in Labor Force, but Want a Job Now

This moved generally sideways during the first three quarters, before declini ng sharply in the last 2 months: 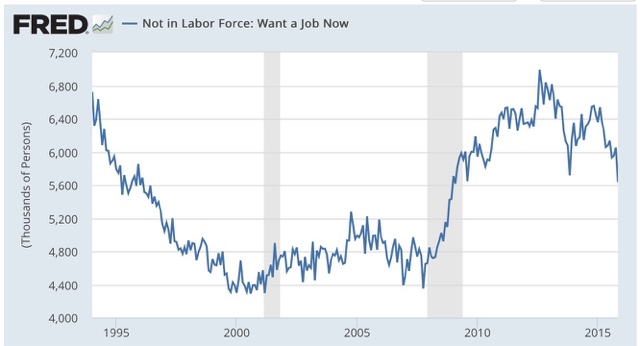 It just made a new post-recession low and is about 1.2 million, or 0.8% of the workforce, above its 1999 and 2007 lows. Still, this is only half the way back from its recessionary highs.
#1 Nominal wage growth

After 3 poor readings last August, December, and February, YoY growth in nominal wages for nonsupervisory personnel fell  back close to their post-recession lows before rebounding this spring.  It has recently been stagnant at about +2% YoY. .  In the below graph, I have subtracted 2.0% fromYoY nominal wage growth, and 9.9%  from the U6 unemployment rate, to set both to zero at their current levels: 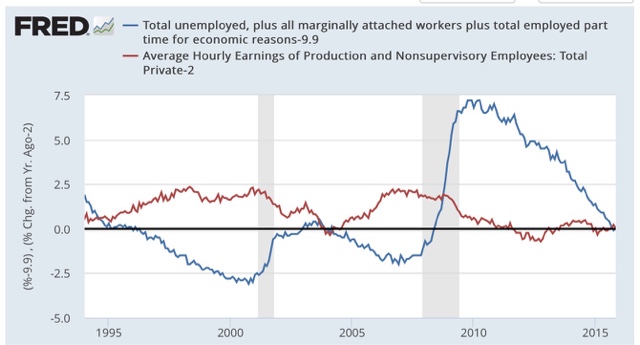 In the 1990s and 2000s, nominal wage growth started to accelerate when the broad U6 unemployment rate fell to 9.9% and 9.7% respectively.  Last December saw an anomalous big decline in average hourly wages, so it is likely that with the next employment report to be released next week, nominal wages will finally break out significantly above 2% YoY.

In summary, this year we made significant improvements in 3 of the 5 metrics, with only slight improvements in two others:
Still,  if current trends continue, we won't achieve real, full employment like 1999 or even  2007 for about another 18 months to 2 years!

Next week I will detail 5 graphs for the year 2016.  Some of the most critical graphs will change, and some will remain the same.
Posted by New Deal democrat at 8:00:00 AM