Why has real median household income declined in the prime working age demographic? It doesn't look like lack of jobs

Real median household income for those in the prime working age demographic of 25-54 has been in decline on a secular basis since the late 1990s. Why?

Further, when the latest jobs report is released tomorrow, the debate about why wages have been so lagging will inevitably continue.  A number of commentators will, incorrectly, point to the decline in real median household income as proof that wages have fallen.

As I have pointed out many times, however, households headed by those of retirement age, 65 or higher, have a median income only a little over half ($35,000) of those of prime working age ($60,000).  With the burgeoning number of retiree households, on a secular basis median household income is likely to decline for quite awhile.

But what about prime working age households, those headed by somebody aged 25 -54?  As shown in Doug Short's graph, those too have declined from about 1998 through the last year measured, 2013: 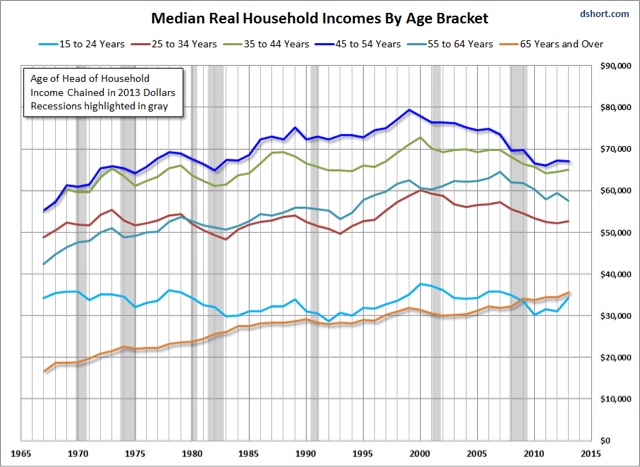 As I have already written, a good and more current proxy for this measure is the Employment Cost Index (a median measure), adjusted for inflation, and then further adjusted by the employment-population ratio for ages 25-54: 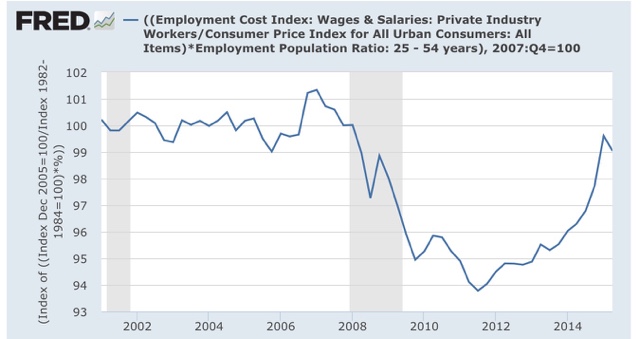 This gives us a measure current through Q2 2015, that closely approximates the Census Bureau's annual measure.

But that still doesn't entirely resolve the issue.  Why has the employment-population ratio of all ages 25-54 gone down on a secular basis since the late 1990s?

One often-mentioned theory is that they are dropping out of the labor force because they can't find work. If so, however, that should be reflected in the measure of those "Not in Labor Force, Want a Job Now."

To test that theory, I ran the following comparison.  First, I calculated the number of persons in age group both unemployed and also not in the labor force for age group 25-54.  That is the red line in the two graphs immediately below.

Then I calculated what the number would be if we added together the unemployed in that age group, plus a proportionate share of those Not in the Labor Force, but Who Want a Job Now (blue), first normed by population: 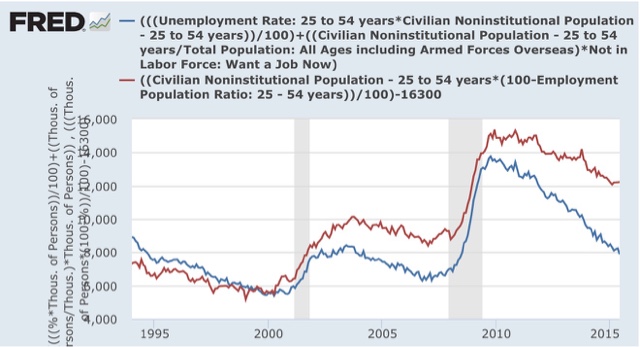 and then the same thing normed by the civilian labor force instead of population: 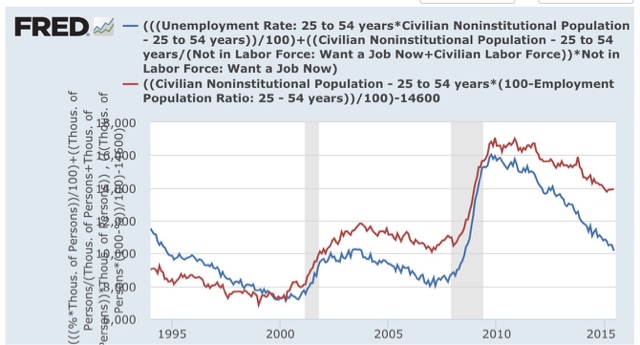 Both measures were set to be equal at their lows of January 2000.

If the primary explanation for the decrease in the employment-population ratio for ages 25-54 were the inability to find a job, the blue line should be at the same level as the red line.  In fact, as you can see, it is much lower.  That tells us that the primary driver of the increase in persons not being employed in age group 25-54 is not poor job prospects.  A likely candidate is that the tradeoff between staying at home to raise children on the one hand vs. employment and the cost of daycare on the other hand, has shifted towards staying at home.

1  I estimated those NILFWJN for ages 25-54 from the St. Louis FRED database.  FRED does not carry, although the BLS does publish, the specific numbers for those not in the labor force but who want a job now.  Here's that graph:

The result, if I were able to integrate that metric into the graphs, would be even more favorable to the conclusion that lack of jobs is not the main culprit in the declining participation of 25-54 year olds.  Below are the numbers, in millions, of those NILFWJN in age group 25-54 by the proportional estimate (left), and actually (right), at their lows, peaks, and latest readings:

If I were able to use the actual numbers in the graphs above, the result would be 1.1 million more favorable to the conclusion.

2. Although they don't count towards the nonemployed in the employment-population ratio, measuring those part time for economic reasons is helpful in determining why real median household income has fallen in the prime working age demographic.  Again, this isn't carried by FRED, but it is available at the BLS website, and here it is:

Here are the numbers in millions at their lows, peaks, and latest readings: