A thought for Sunday: the October forecast that near-record Siberian snow cover would lead to a brutal eastern US winter has been vindicated

You know the drill.  It's Sunday so I can write about whatever interests me.  In this case, a long range weather forecast that turned out to be spot-on.


This past week saw record-shattering cold in much of the eastern half of the US:

While Thursday might seem plenty cold enough for mid-February, Friday will be even more frigid as the plume of Arctic air digs in across the eastern United States. All-time February record lows are possible from Ohio to Virginia on Friday morning as temperatures plummet to as much as 40 degrees below average for this time of year.

The severe arctic outbreak, which has even caused the American half of Niagara Falls to freeze over, may be miserable for millions, but it is good news for Dr. Judah Cohen.  Why?

You may remember a spate of stories that started in October, indicating that Siberian snow cover forecast a brutally cold and snowy winter for the eastern US.  Here's Bloomberg on October 10:


There’s a theory that the amount of snow covering Eurasia in October is an indication of how much icy air will sweep down from the Arctic in December and January, pouring over parts of North America, Europe and East Asia.

Here's another from October 15:

Cohen has found a link between a snowy October in Siberia and a cold and stormy winter in the Eastern United States. And this year, he said the snowpack is expanding in Siberia at breakneck pace.

Cohen’s method proposes that when snow increases rapidly and over a large area over Eurasia during October, it is a strong indication that a weather pattern known as the Arctic Oscillation (AO) will average in its negative phase during winter. When the AO is negative, it favors cold air outbreaks into the eastern U.S. and western Europe, that can also set the stage for snowstorms. (Conversely, when the Siberian snow is cover is minimal and slow to advance, the AO is favored to be positive, with cold air locked up in the Arctic and mild conditions farther south.)

In fact, the correlation coefficient between the snow cover south of 60 degrees latitude in Siberia in October, and the subsequent winter's Arctic Oscillation (AO), is .86: 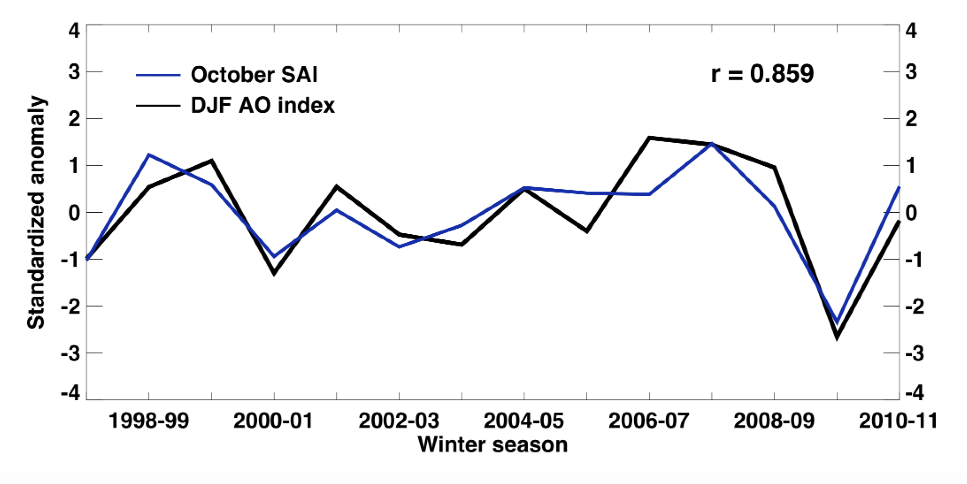 By mid-October, Siberian snow cover was at its second-highest in several decades:

Siberian snow cover is already rapidly expanding, and based on forecast model guidance, that trend is going to continue throughout the rest of the month. Because the SAI considers daily snow extent values, Cohen and his team will not make any predictions until after this month is over. Remember how cold the 2013-14 winter was?? Well, October 2013 had the 4th highest snow cover extent over Eurasia (Siberia) since 46 years of records began. As of October 13, 2014, 12.2 million square kilometers of Eurasia were covered by snow compared to 10.8 million square kilometers around this same time last year. We’re already way ahead of what even occurred last year!

By early November, the result was clear:

About 14.1 million square kilometers of snow blanketed Siberia at the end of October, the second most in records going back to 1967, according to Rutgers University’s Global Snow Lab. The record was in 1976, which broke a streak of mild winters in the eastern U.S. In addition, the speed at which snow has covered the region is the fastest since at least 1998.

“The big early snowbuild will definitely set things up for a cold back half of the winter,” said Todd Crawford, a meteorologist at commercial forecaster WSI in Andover, Massachusetts.

Here is the forecast of relative temperature anomalies for winter 2015 from Cohen's team: 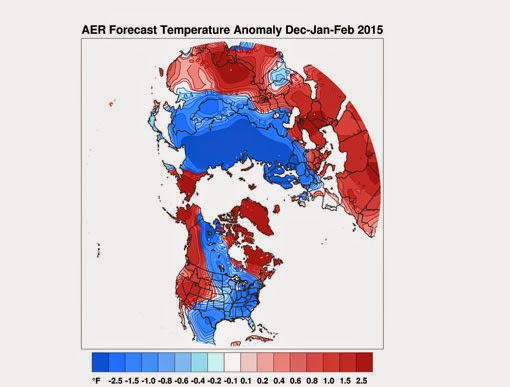 So here we are at the end of February, with snowstorm after snowstorm having raked the Northeast, and some of the most brutal and long-lasting cold in decades. Meanwhile, just as predicted by the forecast, temperatures in Alaska have been has high as 40 degrees above normal!

Dr. Judah Cohen's theory, and forecast, have been vindicated this winter.