Since the economic expansion is well established, in recent months my focus has shifted to wages and the chronic heightened unemployment.  The headline numbers for  November show strong jobs growth, continuing the trend all this year.  Real wages are slowly trending higher - but mainly due to lower inflation.  Participation rates are barely budging.

Those who want a job now, but weren't even counted in the workforce were 4.3 million at the height of the tech boom, and were at 7.0 million a couple of years ago.  Since Congress cut off extended unemployment benefits at the end of last year, they have actually risen, and this month were 6.545 million, over 750,000 higher than they were last November.

On the other hand, the participation rate in the prime working age group has made up over 40% of its loss from its pre-recession high, although it did not change this month.

After inflation, real hourly wages for nonsupervisory employees probably rose from October to November. The  nominal YoY% change in average hourly earnings is 2.1% somewhat better than the likely November YoY inflation rate of 1.5%.

The more leading numbers in the report tell us about where the economy is likely to be a few months from now. These were flat to slightly positive

First, a note of caution about seasonal adjustments. In the last several years, November jobs reports have tended to be somewhat outliers to the upside.  While any number over 300,000 is a great number, temper your enthusiasm a little.

All of the internals of the employment survey were strong.  Job gains were across the board, revisions remained strongly positive, and aggregate hours also increased sharply.

The relative weakness is in the household report, with its small gain in jobs, which is why the unemployment rate stayed neutral.  Those who have completely dropped out of the workforce but want a job now increased yet again, and is close to 800,000 since one year ago.  If that number had not increased, the unemployment rate would be about 0.5% higher than it is.  On the other hand, those who report that they are part time for economic reasons continues to decline.

I have only one caveat to the report, which is expressed in this table from the Bank of America/Merrill Lynch Research Report issued on the jobs number. 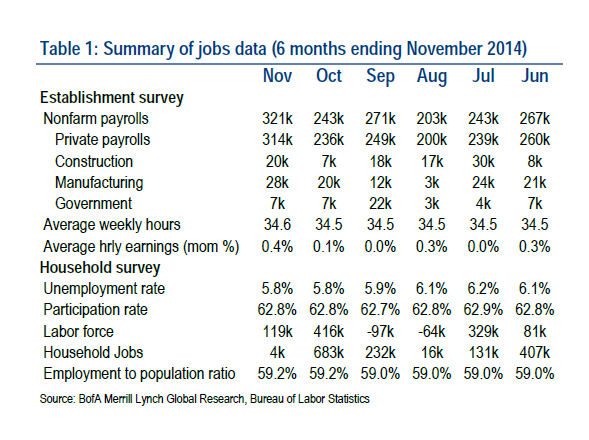 We've had solid growth in the establishment numbers since the beginning of the year.  However, since June, the participation rate has been steady and the employment/population ratio has only increased .2%.  With such strong establishment numbers, you'd think we'd be seeing a better performance in the utilization metrics.
Now, these numbers are revised numerous times, to the upward revisions may be coming in the subsequent  months.
Just food for thought.