US Market Review For the Week of October 6-10.

For the last 3-4 years, central bank created liquidity has been pumped into the equity markets as investors sought higher returns.  There were other reasons for the post-recession rally as documented by Josh Brown over at the Reformed Broker:

1. Everyone was underinvested in stocks, overly invested in cash, gold and bonds.
2. The Fed was furiously pumping dollars directly into the investment markets, fueling all manner of buybacks, IPOs and raised dividends.
3. Sentiment was absurdly pessimistic, with Wall Street, institutional investment managers and retail players negative on equities.
4. US companies were consistently smashing expectations and raising guidance for the future.
5. The rest of the world began reporting improving economic fundamentals.

But while this week's sell-off has garnered headlines, it actually started in Europe over the summer: 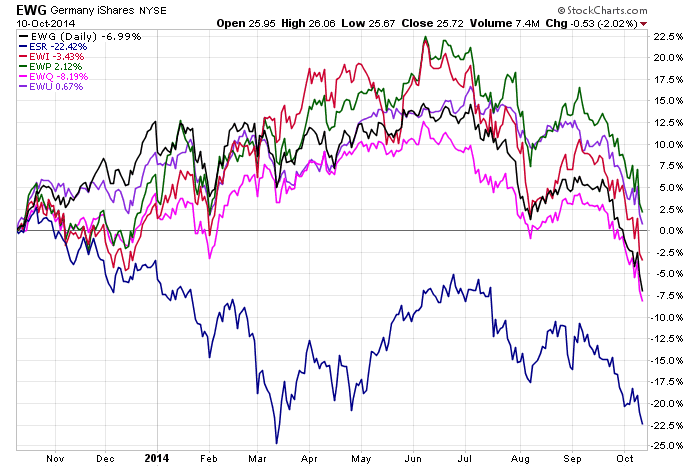 Above is a performance chart of major EU ETFs.  Italy (red) started to sell off in June, followed by Spain (green), Germany (black) and France (purple) in July.  While Italy's early start could easily be interpreted as simple statistical noise, the follow-through from Germany and Spain in July should have alerted adept traders that something was up. 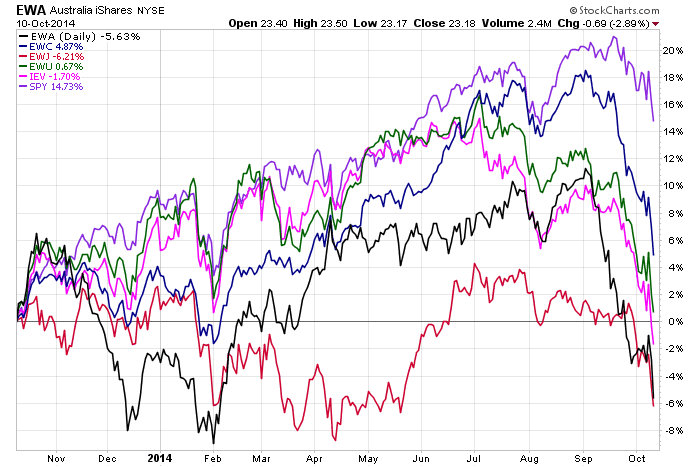 And by September, the sell-off was broad-based globally.  Canada, the UK and Australia (blue, green and black, respectively) all joined the sell-off.  Most of these markets have dropped at least 10%, placing them in correction territory.  And some (Australia in black, Canada in blue) are nearing bear market territory (a 20% correction).
I documented the global change in investment calculus last week, highlighting the impact of increased geo-political risk and the declining economic prospects of the EU, Japan and to a lesser extent, Australia.  Over the last few weeks, these developments have been reflected in various equity indexes, leading to the overall decline in numerous global ETFs.  But the US economy has the ability to continue growing despite an EU slowdown.  True, it will be slower growth.  But it won't be fatal.  This is probably why the SPYs have not sold off to the same degree as the other international indexes (see the purple line in the above chart).
Let's now turn to the charts. 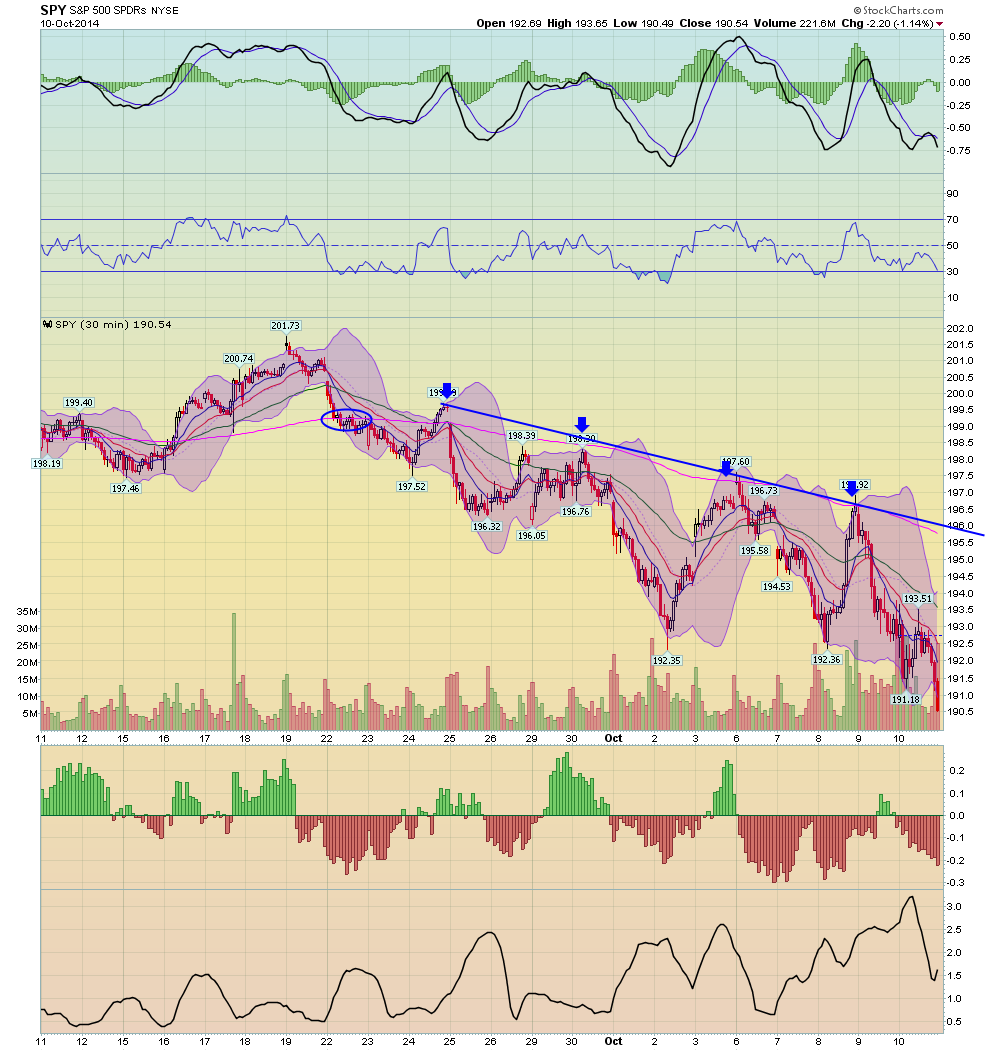 Perspective is a very important element of chart reading.  And to those who looked at the SPYs 30 minute chart (above) over the last few weeks, the latest market developments would have been less of a shock.  The index crossed below the 200 minute EMA on September 22 and have hit that level of resistance on four separate occasions since, only to fall back.  The biggest fail occurred on the 9th when the market continued its sell-off after a post-Fed Minutes rally.  But pay particular attention to the give and take between the bulls and bears in the above chart.  Sharp-sell offs have been met with strong buying activity which indicates there are plenty of people who see value at current price levels.
But there are other more negative technical developments to consider as well coming from the weekly charts. 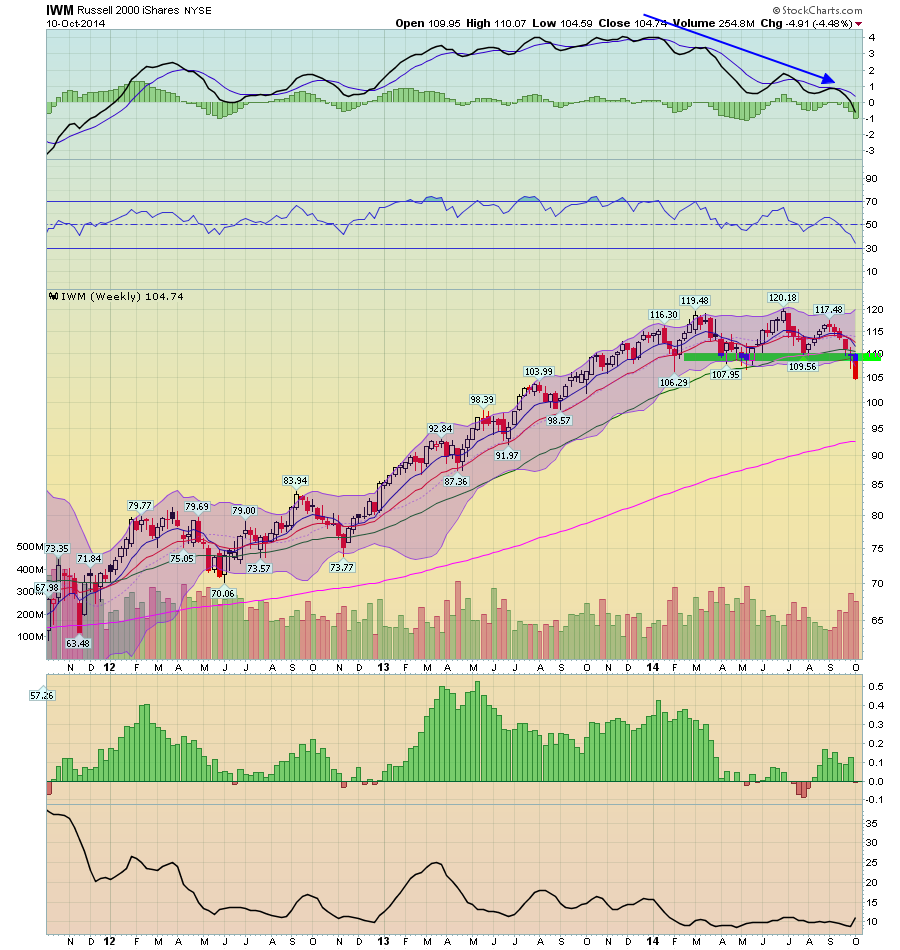 The biggest is the IWMs (Russell 2000) drop though support at the 106/107 level.  This index has been consolidating between the 106/107 level on the lower end and the 119/120 level on the upper side for most of this year.  Several bloggers have highlighted this development and done some great supporting research, with the following overall conclusion:
Like most things in the stock market, small cap underperformance is cyclical and quite common. There is no conclusive evidence that it has to lead to a big correction or end of the bull market. Perhaps the best we can say is: “2015 is likely to be a good year that is maybe possibly slightly less good than an average year”. 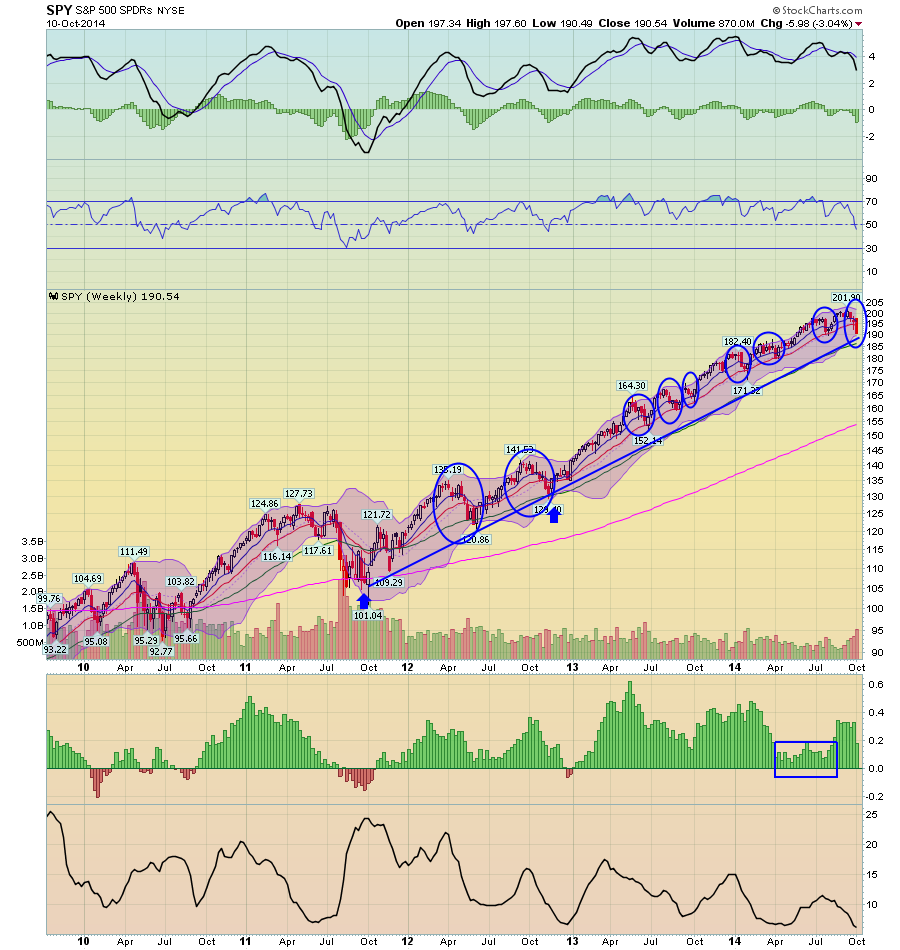 The Russell 2000, however, is not the only weakening technical chart.  Another potential technical victim is the SPYs, which are also nearing their multi-year trend line (see above). 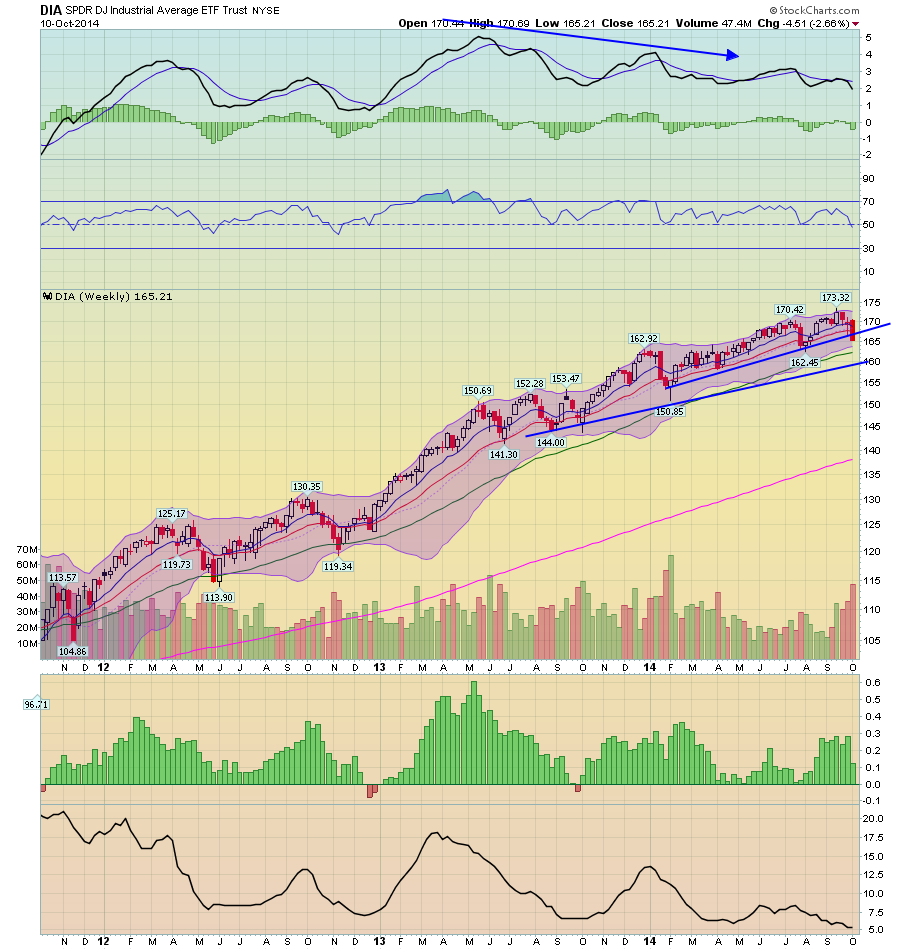 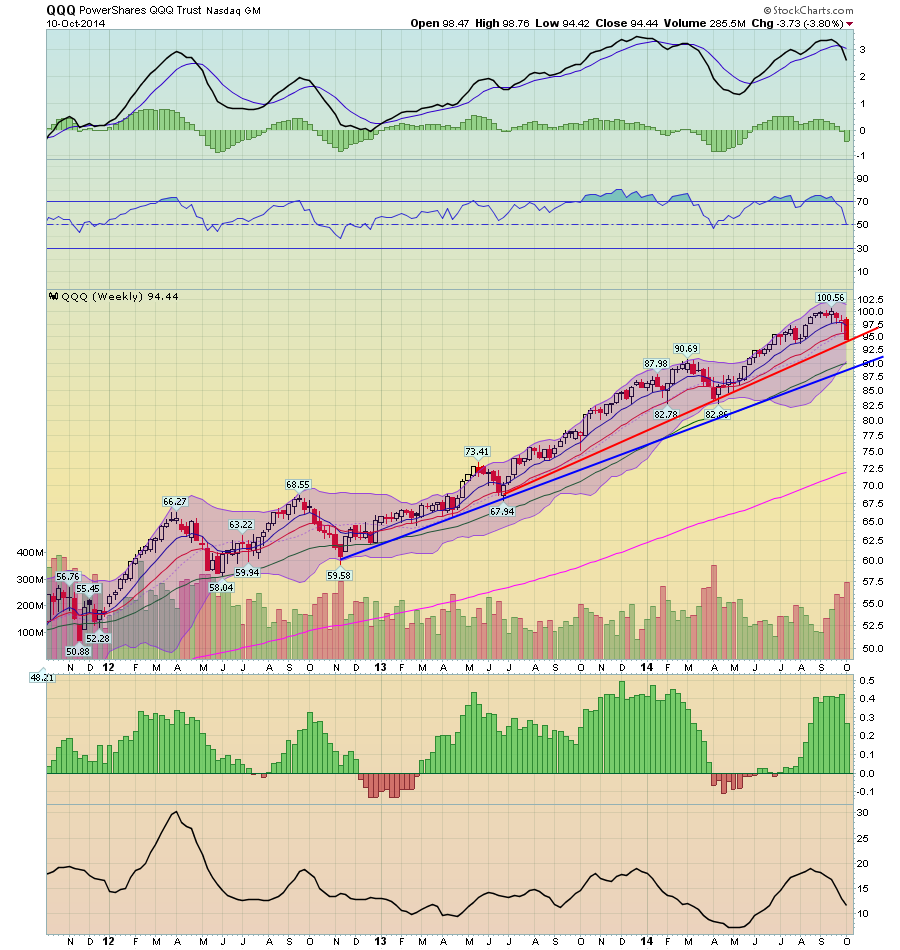 And the weekly Dow has already broken through one support line (top chart) with the NASDAQ sitting at long-term support (bottom chart).  Although both charts have longer-term support lines available, bear in mind that both these longer-term trend lines are weaker as they are not connecting any lows occurring after the summer of 2013. 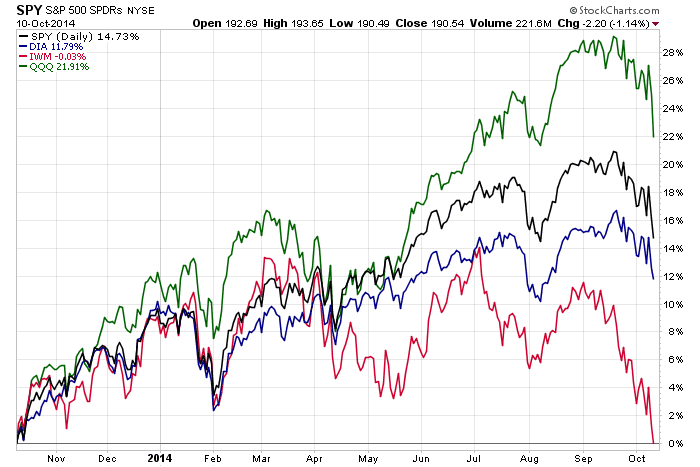 But the US equity sell-off is hardly fatal.  The worst hit is the Russell 2000 (red line above) which has dropped about 14%.  But the other indexes (DIA, SPY and QQQ) have only dropped between 4%-6% since the beginning of September, meaning that none are even in correction territory yet.
But that doesn't mean we won't get there in the short run.  The global sell-off isn't going away soon, largely because of the degradation in international growth prospects.  Safe haven flows are increasing as well, as seen \by the rising US Treasury market: 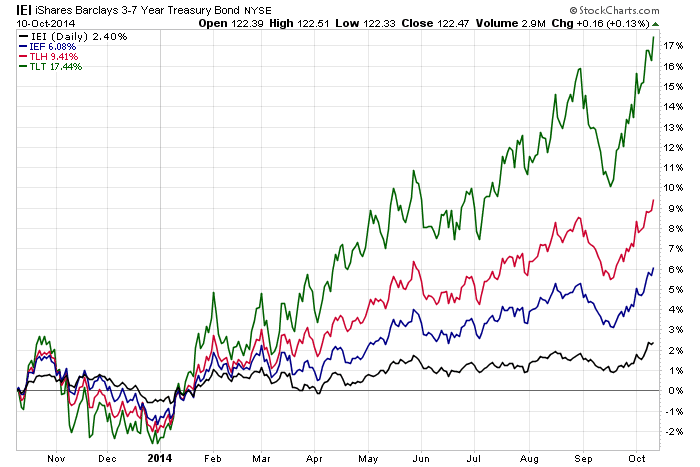 But in the longer run, the US economy is still in good shape.  There has been no meaningful negative economic events indicating an imminent slow-down.  Consider the following from the Conference Board:
The Conference Board LEI for the U.S. increased slightly in August. This month’s gain was driven by large positive contributions from the yield spread and the ISM® new orders index. In the six-month period ending August 2014, the leading economic index increased 3.9 percent (about an 8.0 percent annual rate), faster than the growth of 2.8 percent (about a 5.6 percent annual rate) during the previous six months. Also, the strengths among the leading indicators have continued to be very widespread.
The Conference Board CEI for the U.S., a measure of current economic activity, also improved. The coincident economic index rose 1.4 percent (about a 2.8 percent annual rate) between February and August 2014, slightly faster than the growth of 1.1 percent (about a 2.2 percent annual rate) for the previous six months. The strengths among the coincident indicators have remained very widespread, with all components advancing over the past six months. The lagging economic index continued to increase but at a higher rate than the CEI. As a result, the coincident-to-lagging ratio is down slightly. Meanwhile, real GDP expanded at a 4.2 percent annual rate in the second quarter, after contracting by 2.1 percent (annual rate) in the first quarter of this year.

The leading and coincident indicators are rising, and doing so at a faster pace over the respective latest 6-month period with both are rising on broad-based support.  And the Federal Reserve is clearly in an accommodating mode as evidenced by the dovish tone of the latest Minutes.

From a US equity perspective, we're really passengers on a global investment train where increasing volatility is caused by events beyond our borders.  But while this is leading to a US sell-off, it's actually a much needed market drop.  US valuations have been high; finding bargains since the first of the year has been a fool's errand.  And the level of investor complacency has needed a shake-up simply to put us back on a more alert footing.   I sincerely doubt the sell-off is over and wouldn't be surprised to see it continue through the end of the year.  But the strong fundamental US economic background indicates this is a time to take some profits and start looking for potential acquisitions that are more fairly priced.