No matter how you measure, wages have stagnated

We have a variety of economic data series to track wages, including measures of average wages, median wages, and wages per unit production hour. There are at least 7 such measures.

In addition to the monthly average hourly pay report (listed first below), there are 4 quartely series:

There are also two annual series:
Let's take a look at all of them.

The first graph, below, tracks monthly average (mean, not median) hourly wages (green), median wages from the employment cost index (red), and unit labor production costs (blue). All are adjusted for inflation using the CPI.  Since the quarterly index of median wages only started in Q1 2000, I have normed the indexes to 100 at that time: 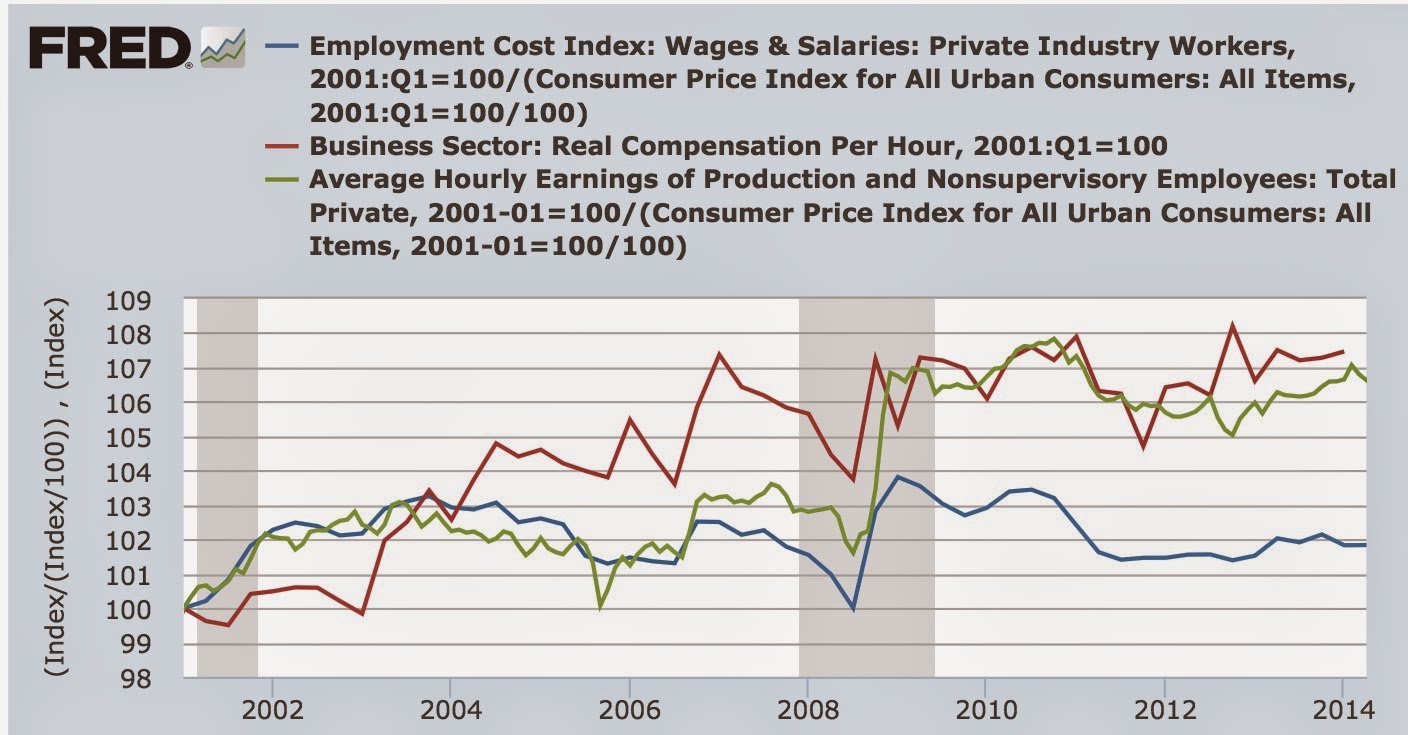 As you can see, real average wages have risen fitfully, mainly reacting to the price of gas). Median real wages have essentially been flat for 10 years. This is certainly not what I would call good, given all the productivity gains during that same period. You need consumers to have the money to buy, before real growth in selling picks up as well.

Speaking of productivity gains, here are unit labor costs (i.e., how much labor does it cost to produce one widget) through the second quarter of 2014: 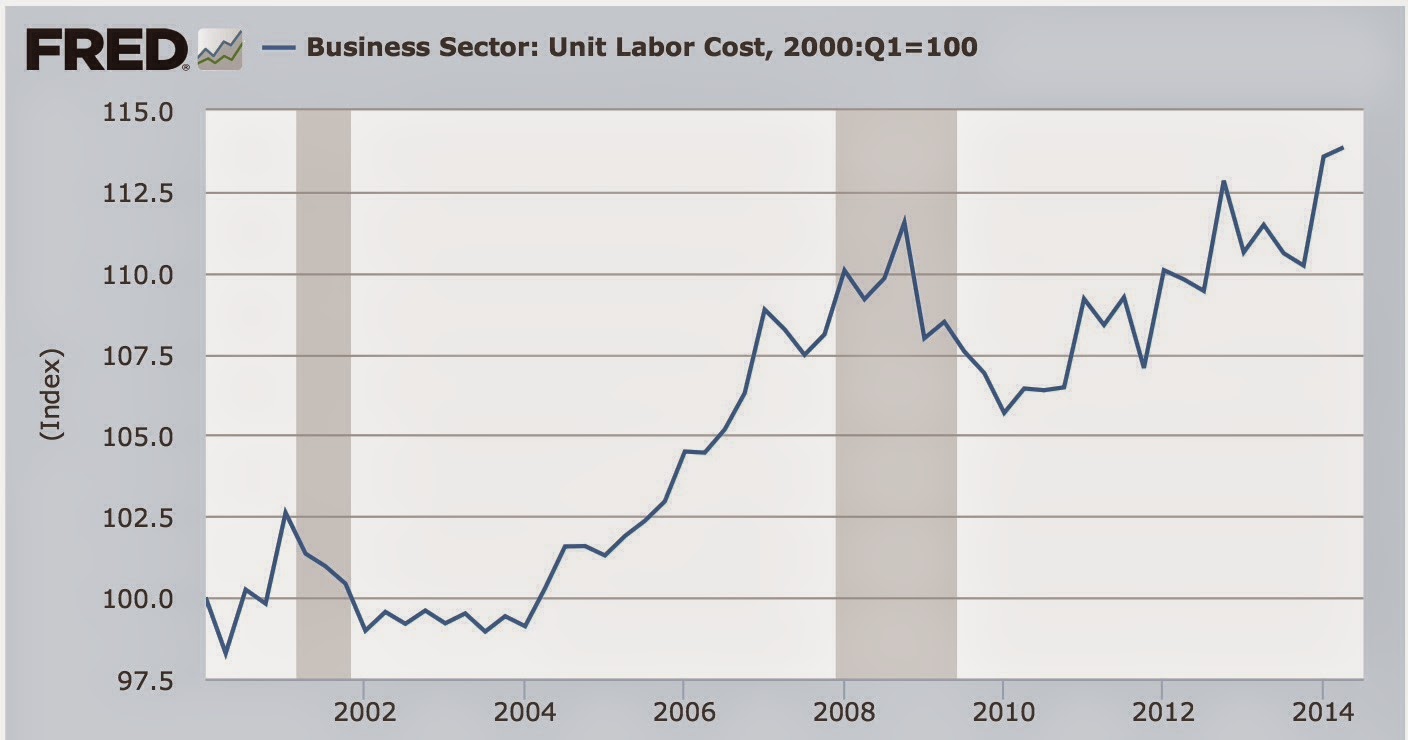 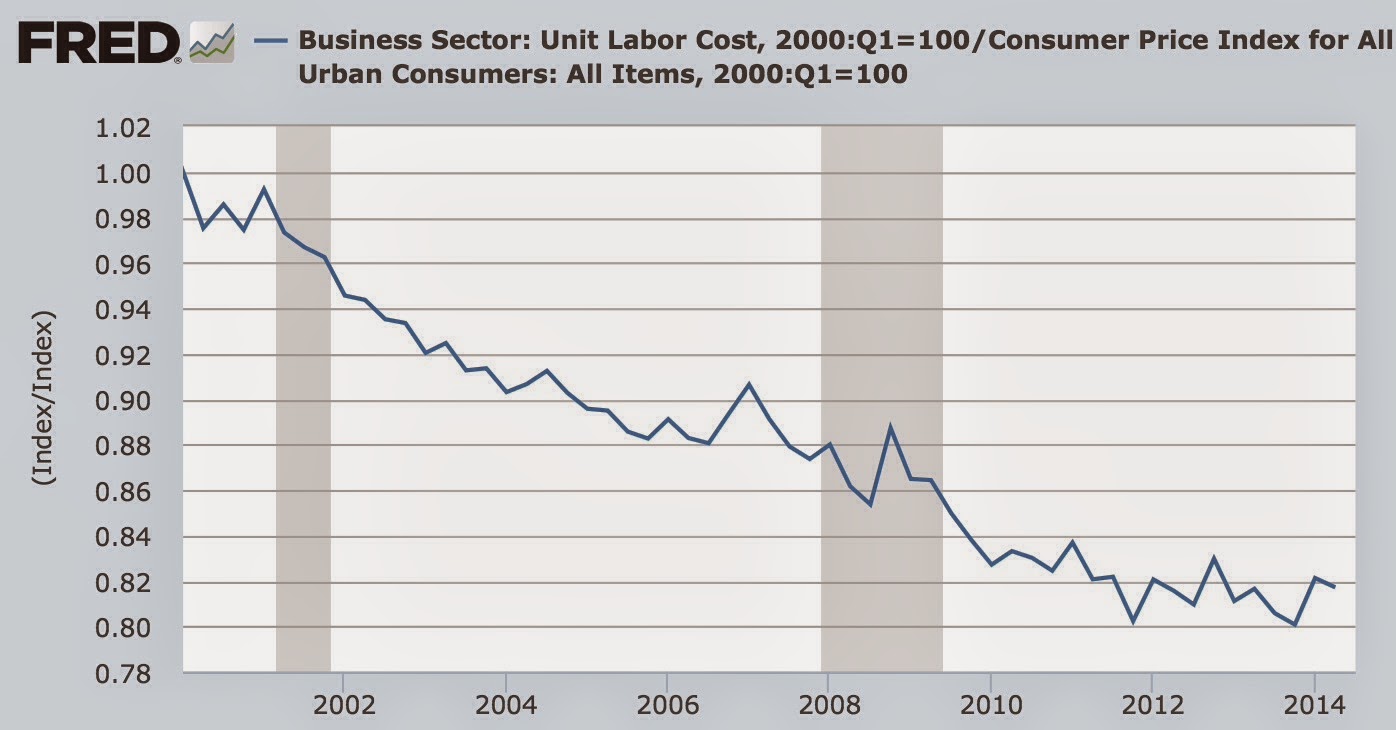 This tells quite a different story.  The share of payments to labor has not kept up with the real price of production -- which is the flip side of record corporate profits.

The remaining 4 measures do not come with graphic presentations either by the BLS or the St. Louis FRED.  So I will provide them in a table, below.

Two of the remaining series uses tax return data.  Once a year, the Social Security Administration reports on the median salary of those who pay into it via their withholding taxes.  Secondly, every year the BLS reports on mean and median hourly wage rates for a panoplay of "occupational employment," and also give the average and the median for the aggregate sample. The most recent report, from this April,  reported on the data as of May 2013. The below table gives the median wage, adjusted by the CPI.

A third measure in the table below is the quarterly measure of "usual weekly earnings" of wage and salary workers. That report only goes back to 2004.

To reiterate, all of these are adjusted for inflation:


While two of the above 3 measues are annual, "usual weekly earnings" is updated quarterly, so here is a more detailed look at that measure through the second quarter of this year:

If you are keeping score, among the median measures, that's a decline from peak to trough is -3.6% for Social Security, -4.3% for usual weekly wages, -3.4% for Occupational employment, and -2.6% for the Employment Cost Index.  Average hourly wages declined - 2.6% from 2009 to their trough in 2012.  The big, nearly 2% decline in second quarter 2014 of usual weekly earnings is certainly surprising. Since it goes against all of the other monthly and quarterly series, I am inclined to think it is just a case of an outlier panel.  We'll see when 3rd quarter results are posted in October.

The bottom line is that, since the turn of the Millenium, real median wages - no matter how measured -  have stagnated. Gas prices caused them to rise during the recession, and then decline thereafter as the effects of those gas prices filtered through the economy.

The jury is out on whether that decline has ended. Some measures suggest that real wages bottomed in late 2012 or early 2013.  Others suggest that the decline may have continued at least slightly since then.

No matter which measure you use, the fact is that American labor is still not sharing in the fruits of its productivity.