The housing market halfway through 2014: a comprehensive report

Wtih this morning's report on pending home sales, housing data from the first half of 2014 is in the books. At the end of last year, I politely disagreed with Bill McBride a/k/a Calculated Risk, about the direction of the market this year.  Bill thought average starts and sales would be up 20%.  Based on increased interest rates, I believed they would be down by about -100,000 at some point this year.  Except for one outlier in housing starts in April, neither has panned out so far, with data coming somewhere in the middle.  With that summary, let's take a detailed look at housing through midyear.

As I wrote last month, the housing market tends to cycle in a regular order:

Because of the time lag, prices and inventory may still be reacting to a move in interest rates that has since reversed - and that appears to be the case now.  Let's look at where each of those points in the cycle stands. 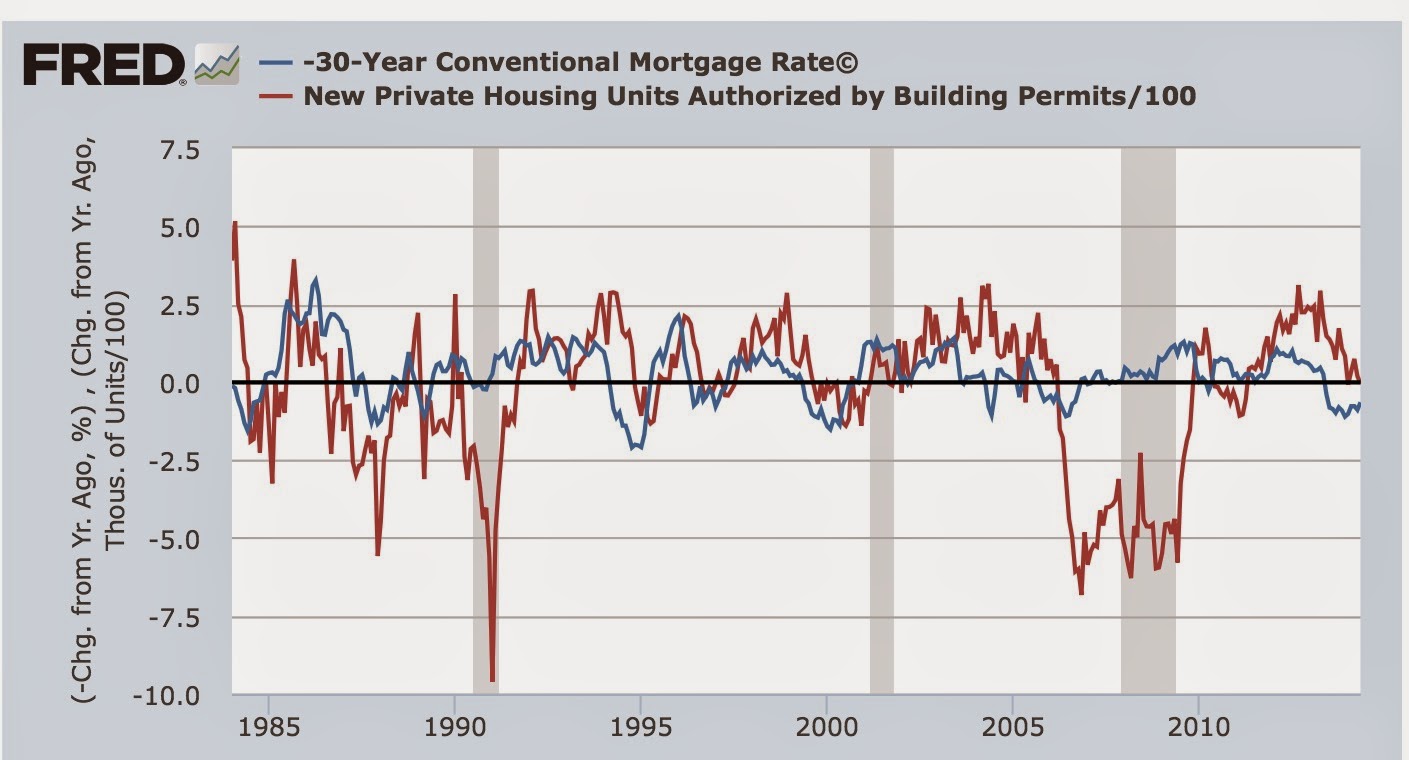 Here's a close-up of the last 5 years: 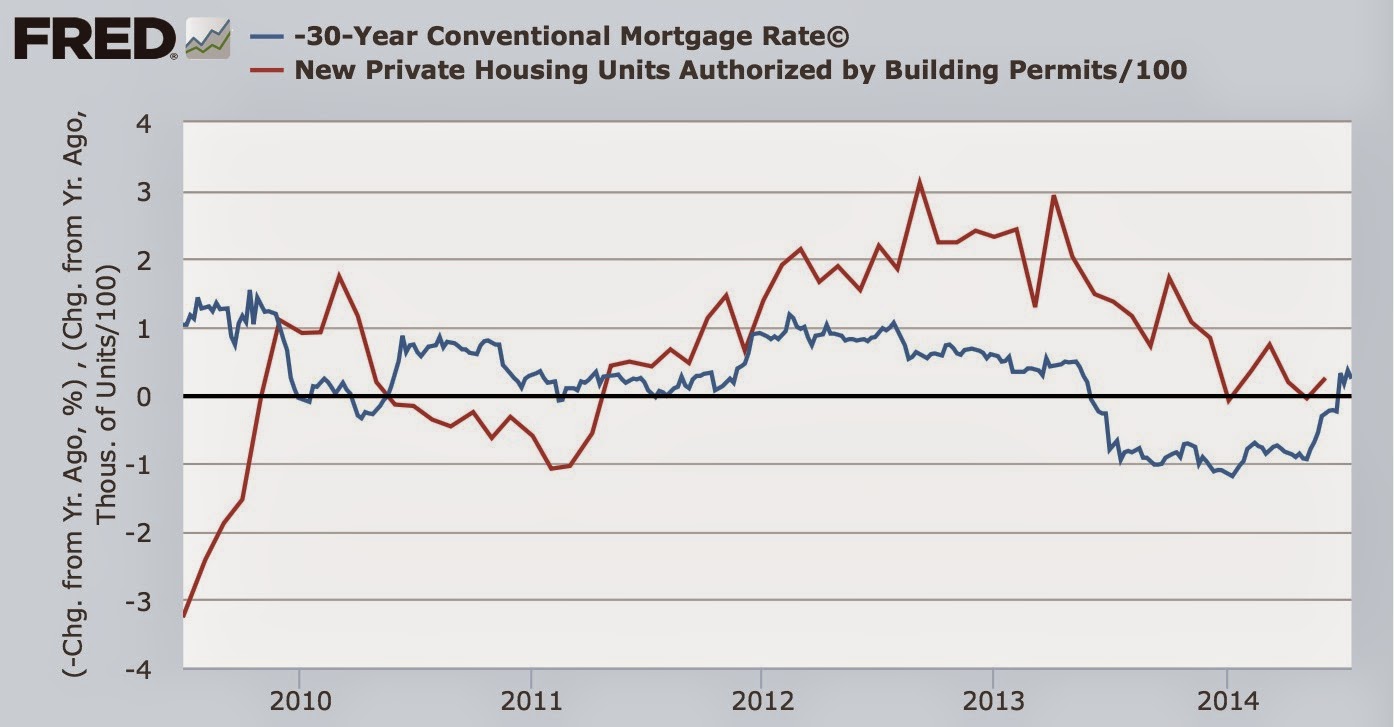 Interest rates on mortgages went up from 3.4% in early May 2013 to a high of 3.6% in August of last year.  On 16 of 19 occasions since the end of World War 2, that big a change led to a YoY decline of at least -100,000 in permits. In this case, housing permits have since drifted back lower, down to 4.1% at the end of June of this year, and in the last month have been on average about -0.3% lower than they were at this time last year.

The YoY decline in interest rates indicates that we should shortly start to see some improvement in permits, sales, and starts, although probably muted since rates have not returned to 2013 lows.

Here is a graph of the change, in thousands, YoY of starts (blue), permits (red), new home sales (green), and existing home sales (orange) (note that the St. Louis FRED does not track pending home sales): 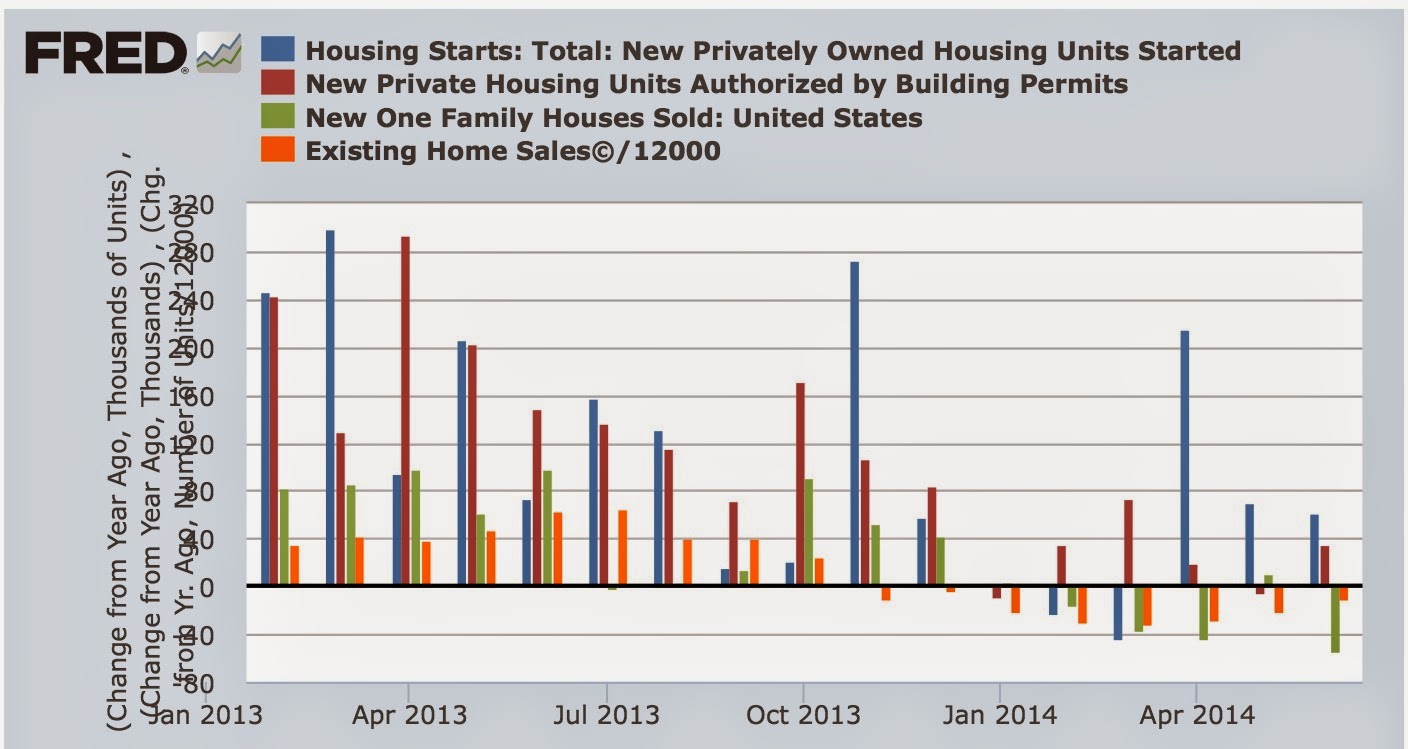 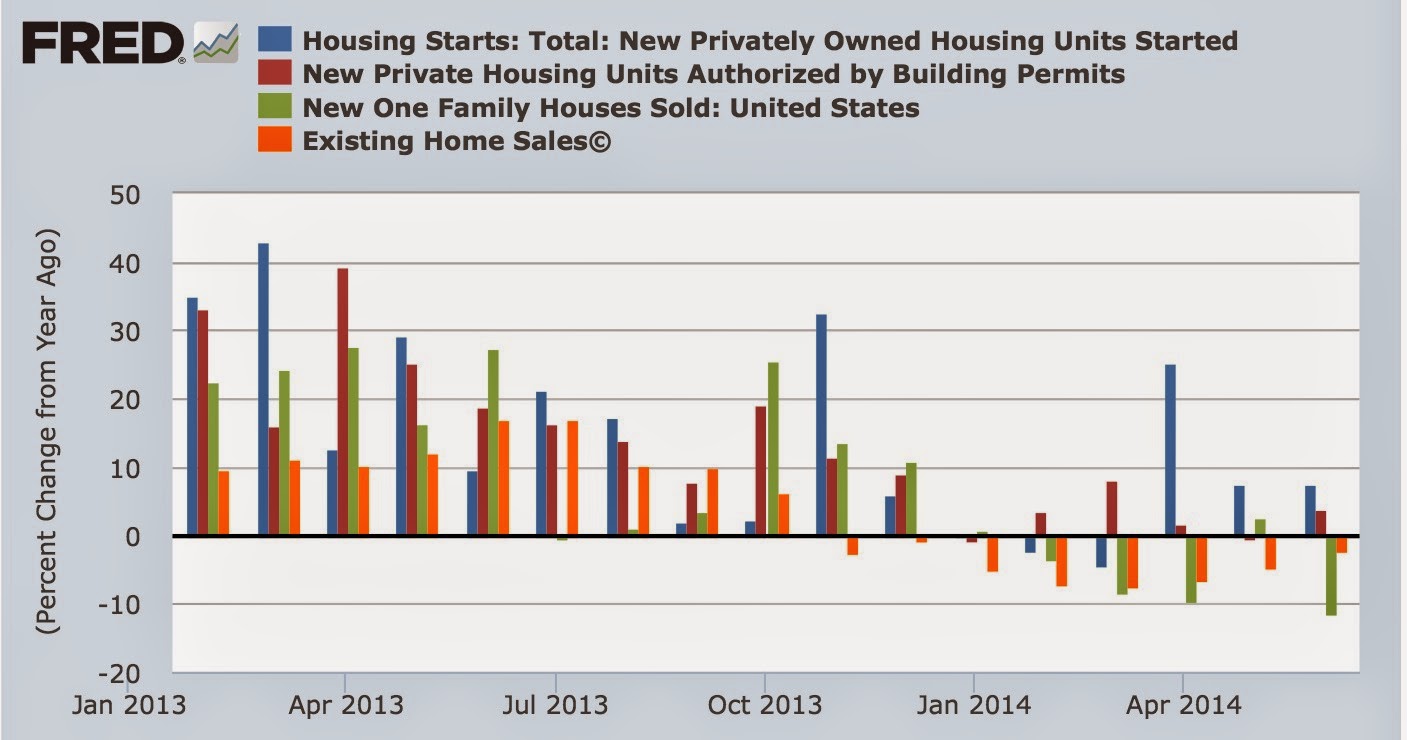 Both of these graphs show the clear deceleration in the housing market through 2013 and into 2014.  With the sole exception of housing starts in April (a more noisy series than permits), which may have been a bounce-back from an unexpectedly dismal winter, all of the major series have been dead in the water this year. New and existing home sales have been consistently negative, and permits up only +2% in the first half of 2014 compared with the first half of 2013.

This morning, pending home sales were reported as down -1.1%  from May to June, and down -7.3% from June of last year, which was also the index's post-housing bust high.  It further appears that February of this year was the subsequent low in reaction to higher interest rates. The index is up +9% on a seasonally adjusted basis since that time.

The impact of demographics on permits, starts, and sales

I suspect the situation this year is analogous to the late 1960's (one of the four exceptions to the rule that rising interest rates cause an actual decrease in sales), when Boomers first reached adulthood and the existing apartment stock was nowhere near adequate to the task.  Multi-unit starts skyrocketed, despite higher interest rates, while single family homes languished. It was an era of generally rising interest rates, and any temporary decline in interest rates was met with heightened housing activity.

Now it is Millennials. Now as then, it is only multi-unit (apartment) construction that is carrying the recovery in housing this year. Single family home starts and sales have completely stalled.  Here is a graph of the YoY% change in single family house permits (blue) and multi-unit permits (red) since the beginning of 2011: 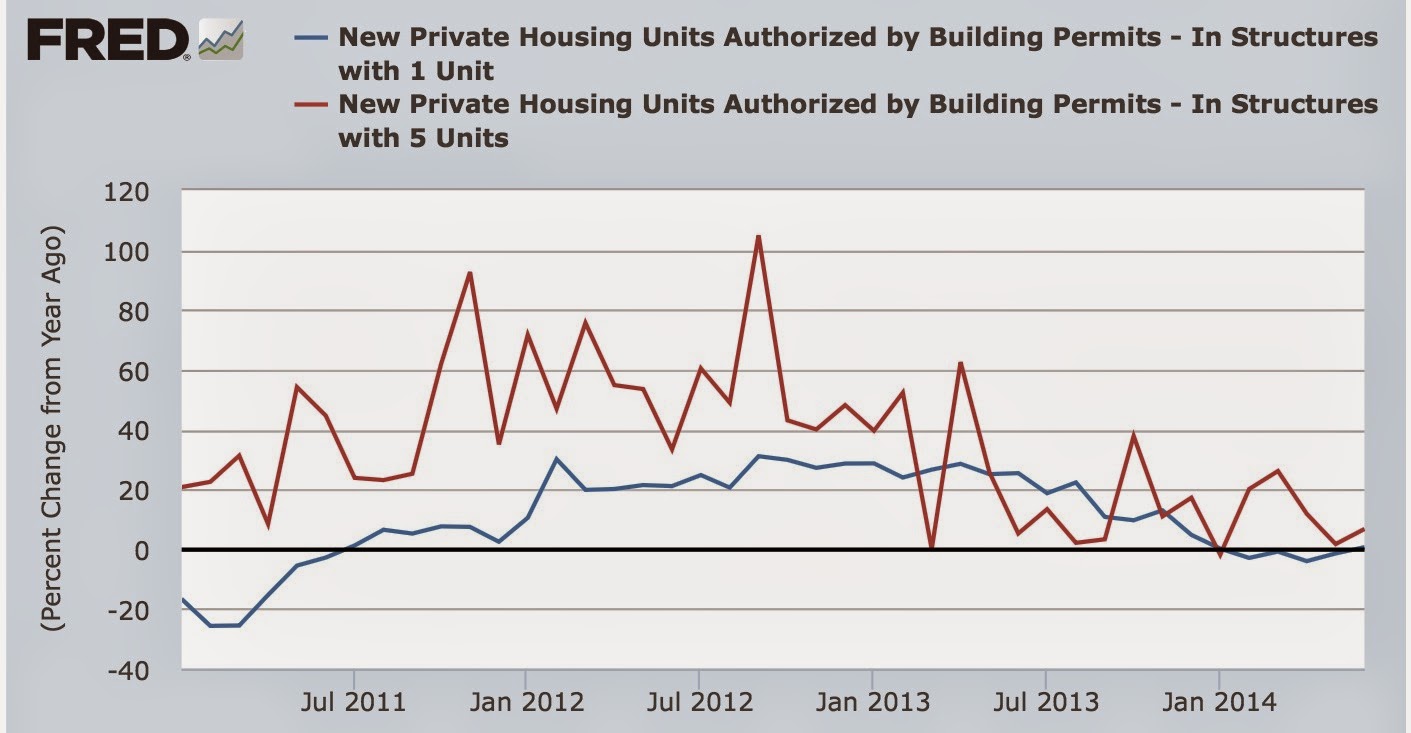 Prices continue to increase, but YoY the price gains are decelerating at various rates depending on the index.  Let's start by showing the YoY% change in median prices in the Case Shiller 20 city index: 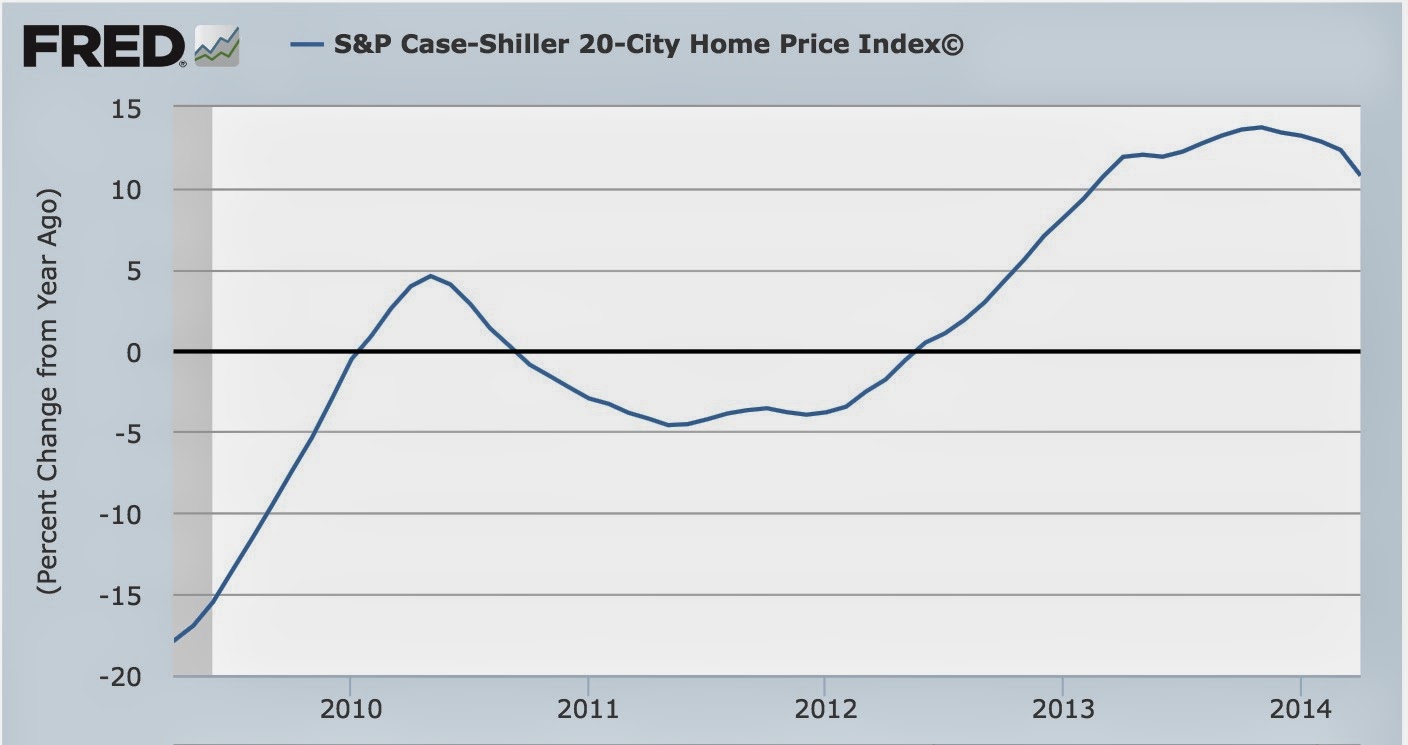 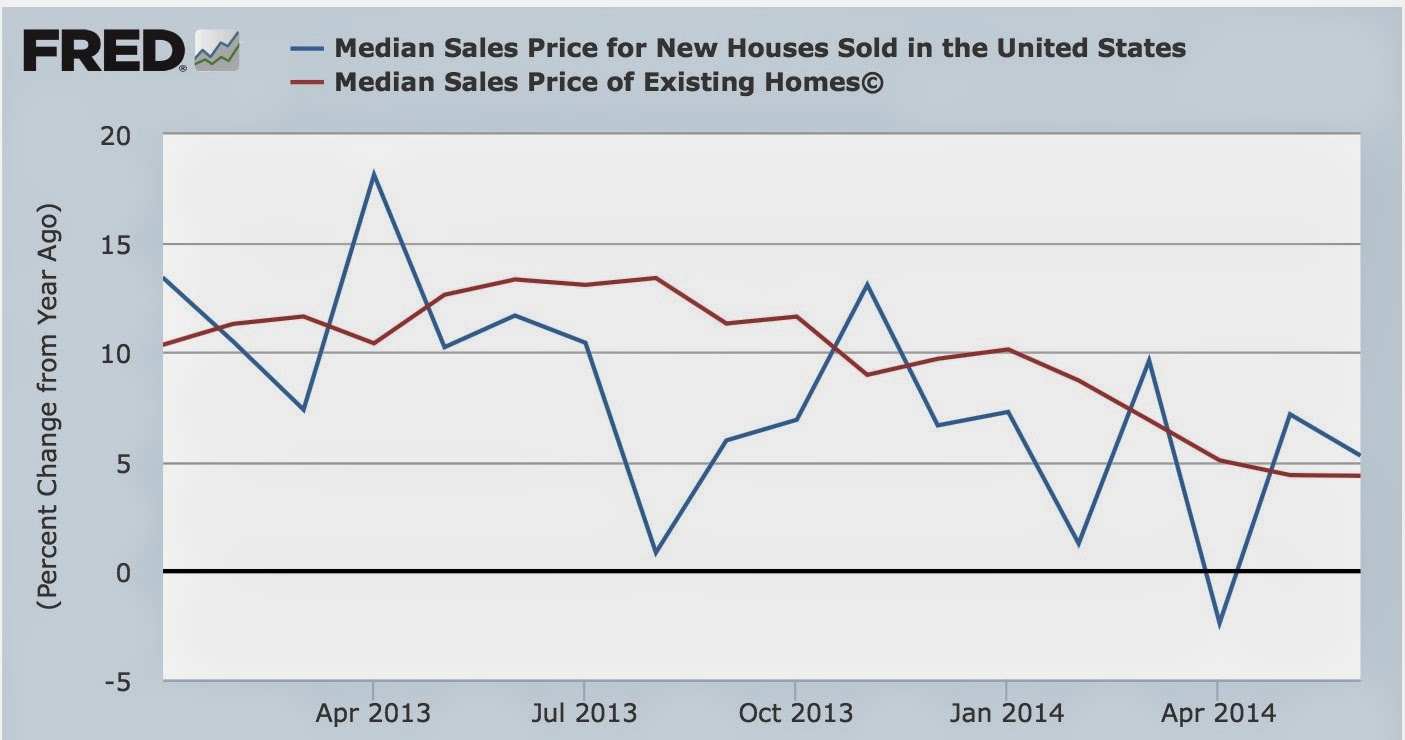 Finally, it is worth noting that the same deceleration is also showing up in the data at Depatment of Numbers Housing Tracker. I used this database of asking prices, which is updated weekly, to call in real time both the top of the housing boom in 2006, and the bottom of the housing bust in 2012.  What is particularly noteworthy is that in 2006, it was the asking prices for houses in the 75th percentile (more expensive homes) which turned first.  Now prices for those same more expensive houses are showing the most deceleration of all, as shown in this table, which shows the YoY% change for each percentile of houses for sale nationwide:

With housing prices still increasing, albeit at a reduced rate, we would expect to find more inventory entering the market, as potential sellers hope to take advantage of the improved pricing situation.  And that's exactly what we find. Below is the graph of combined new and existing home inventories: 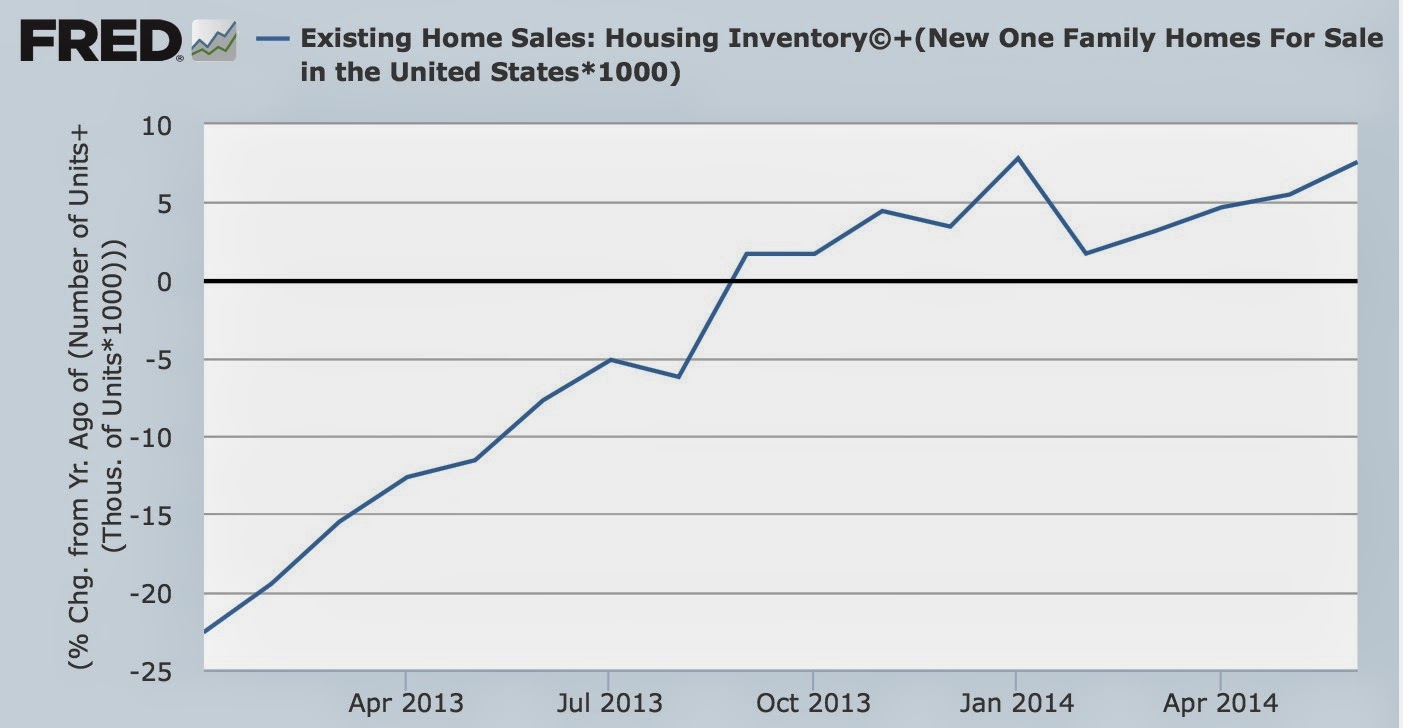 In short, as of midyear 2014, the trends in the housing market are reacting in their normal order. Interest rates have turned positive, sales are bottoming, prices are increasing at a quickly decelerating rate YoY and may actually have peaked, while inventory is still increasing smartly and is likely to continue to pour onto the market for a while longer.