Initial jobless claims are generally acknowledged to be a short leading indicator for the economy. With this morning's report of 350,000 new claims being filed last week, the 4 week average fell to 356,750. This is the lowest 4 week average in nearly 5 years! In the nearly 50 year history of initial jobless claims data, there has never been a new low in initial claims set during a recession.

Back in July I took a look at the historical record. In all cases but one since records started to be kept back in the 1960s, initial jobless claims rose 10% from their lows before a recession began. The lowest increase was 5%. Once recessions have begun, the number of claims rose inexorably. The shortest period of time between the low in claims and the onset of recession was 2 1/2 months.

While we did have two weeks post-Sandy where initial claims were more than 10% above their previous post-recession low of 363,000, my calculations have shown that ex-Sandy, the four week average of new claims would only have risen into the low 370,000s range.

While initial jobless claims are only one indicator, it is unheard of for claims to be falling to new lows unless the economy is expanding, and is strong evidence against any thesis that a recession began earlier this year.

P.S.: The data for one week ago suggests that the effects of Sandy have almost completely dissipated. Combined NY and NJ claims one week ago were 9.4% of all claims filed, vs. 9.0% one year ago, and vs. 8.9% in October before Sandy struck. At worst, Sandy may have had about an impact of about 1000 claims.

P.P.S.: I'll update with a graph showing today's data once it is available. UPDATE:Here's the graph, starting in 1989 to compare the typical pattern, and showing this week's new post-recession low at the very end: 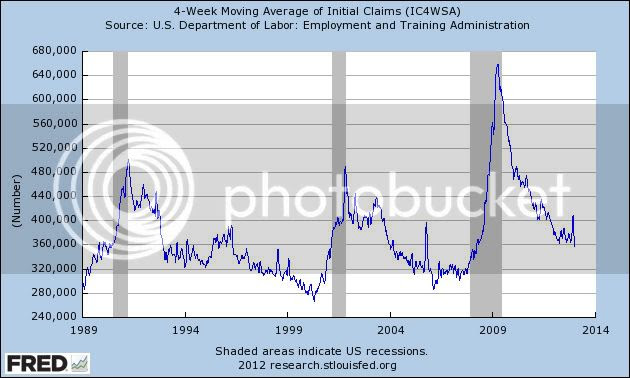