Real retail sales, one of the four markers of expansion vs. recession, made new post-recession highs in both August and September. In the below graph, I've also included inflation-adjusted manufacturing and trade sales (red), another mesaure of broad sales favored by ECRI, which remains slighly below its springtime high: 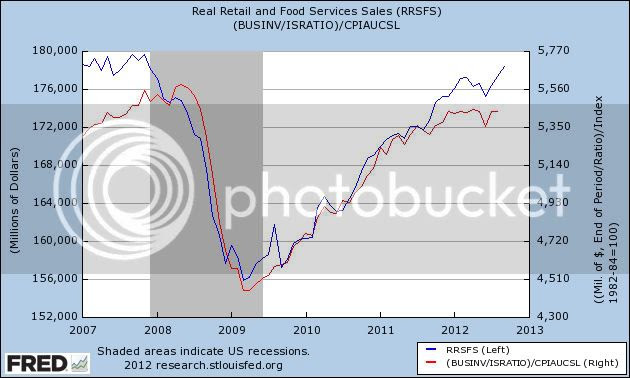 This confirms what we've been seeing in the Weekly Indicators, especially Gallup's consumer spending, which has improved markedly since July.

Since industrial production has not recovered from last month's steep downturn, continuing to suggest that the manfacturing part of the economy is contracting, it is encouraging that consumption has not followed suit (and indeed, usually consumption slightly leads both production and employment).

In terms of whether the economy as a whole is still expanding, or is slipping into recession, the real personal income report later this month will take on an added importance.
Posted by New Deal democrat at 2:00:00 PM