A Closer Look At Manufacturing

Manufacturing was a very important area of the economy for the last two years, as it was a big factor in getting the US out of recession.  However, over the last few months, there have been signs of a big slowdown.  So, let's take a look at the data to see where we are. 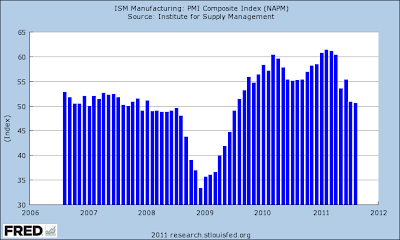 The overall ISM manufacturing index was doing well until four months ago when we saw a major drop.  While the overall readings are still above 50 -- indicating expansion -- there is a clear weakening trend to the numbers which is concerning.  According to the latest report, 10 of 18 industries are expanding while 6 are contracting.  Regarding the macro environment, consider these anecdotal comments from the same report:
The comments indicate that international demand is still the driving force while domestic demand is weakening.  There is also a growing concern about the future, leading to customers pulling back on purchases.


The August Empire State Manufacturing Survey indicates that conditions for New York manufacturers continued to worsen. The general business conditions index fell four points to -7.7, its third consecutive negative reading. The new orders index also remained below zero, at -7.8, while the shipments index was positive at 3.0. The unfilled orders and inventories indexes dropped further into negative territory. Price indexes continued to retreat, with the prices paid index falling fifteen points to 28.3 and the prices received index falling three points to 2.2. The index for number of employees was slightly positive, while the average workweek index was slightly negative. Future indexes weakened significantly. The future general business conditions index plummeted twenty-four points to 8.7, its lowest level since February 2009, and the future new order 2001 readings. The capital expenditures index was also down sharply.

Three months in negative territory is a very bad development.  In addition, the internals are also weakening.  About the only positive in the report was that the level of negativity was shallow.  However, that does not make the situation that much better.

The Philly Fed is in fact weaker:


The survey’s broadest measure of manufacturing conditions, the diffusion index of current activity, decreased from a slightly positive reading of 3.2 in July to -30.7 in August. The index is now at its lowest level since March 2009 (see Chart). The demand for manufactured goods, as measured by the current new orders index, paralleled the decline in the general activity index, falling 27 points. The current shipments index fell 18 points and recorded its first negative reading since September of last year. Suggesting weakening activity, indexes for inventories, unfilled orders, and delivery times were all in negative territory this month.


This was in fact a crashing of the index; all the internals are much weaker over the last few months.  The severe drop into very negative territory in a one month period is deeply concerning.

The latest Richmond report is just as bad:


In August, the seasonally adjusted composite index of manufacturing activity — our broadest measure of manufacturing — declined nine points to −10 from July's reading of −1. Among the index's components, shipments lost sixteen points to −17, and new orders dropped six points to finish at −11, while the jobs index inched down three points to 1.

There is literally no good news in the above summation; it's all bad.


Texas factory activity was largely unchanged in August, according to business executives responding to the Texas Manufacturing Outlook Survey. The production index, a key measure of state manufacturing conditions, remained positive but fell from 10.8 to 1.1, suggesting growth stalled this month.

Most other measures of current manufacturing conditions indicated slower growth in August. The new orders index fell from 16 to 4.8 this month, suggesting order volumes continued to increase, but at a decelerated pace. The shipments index was positive and little changed, edging down from 7.8 to 6.7. The capacity utilization index dipped into negative territory in August, with one-quarter of manufacturers noting a decrease.

The month-over-month composite index was 3 in August, unchanged from 3 in July and down from 14 in June (Tables 1 & 2, Chart). The composite index is an average of the production, new orders, employment, supplier delivery time, and raw materials inventory indexes

Manufacturing activity slowed in nondurable goods factories, while growth in factory activity increased in durable goods producing plants, particularly for machinery, fabricated metal, and electronic equipment products. Other month-over-month indexes were mixed in August. The
production index fell from 2 to -2, and the shipments index also moved into negative territory. However, the new orders index rebounded after dropping last month, and the employment and new orders for export indexes also rose. Both inventory indexes fell for the second straight month.

The above data is very clear.  At the national level, overall manufacturing activity is right above contraction.  At some of the regional levels, we're seeing outright contract.  Regardless, the conclusion is clear: manufacturing is slowing and in fact may be near a stall.