While I gave 96 as a shorting level least week, this week I would make it the 200 day EMA. In addition, I would still wait until prices moved about the 104 price level as this would get them above technical resistance and through the EMAs.

Little has occurred this week to change that opinion. 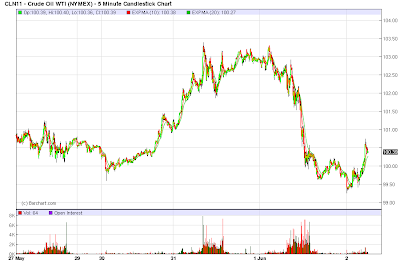 The 5-minute chart shows that prices have been moving between roughly 99 and 103. In addition, the 104 level still appears to be providing upside resistance to prices, as evidenced by yesterday's drop. 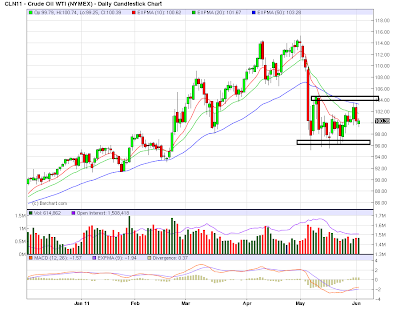 On the daily chart, I've added two areas at roughly the 96 and 104 level to show where support and resistance are. Prices have not moved beyond eight area in any meaningful way. Also note the 50 day EMA is still providing upside resistance for prices.

The oil market is still trying to figure out a direction. On the upside, we are moving into the summer driving season, which is typically a period of rising oil prices. However, with retail gas prices still near $4/gallon and the economy slowing, traders are also aware that gas can't go much higher without killing US demand. At the same time, developing markets are providing a demand floor; as their respective middle classes have grown, so has their respective oil demand. As such, there is little reason to see a significant price decline -- hence, the reason I thing 96 will provide support going froward.
Posted by Unknown at 6:00:00 AM