Gross domestic product in the Organization for Economic Cooperation and Development's 30 member countries stabilized between April and June with support from exporters Germany and Japan, but it remained sharply lower than in the second quarter of last year, the Paris-based group said Wednesday.

GDP across the OECD area, which includes many of the world's biggest economies, was steady in the second quarter compared with the first three months of the year, breaking one year of quarterly declines and a sharp reversal from the record 2.1% slump seen in the first quarter.

But GDP for the 30 countries was 4.6% lower than in the second quarter of last year, only marginally improved from the 4.7% year-to-year decline seen in the first quarter, it said.

The OECD report supports the view that the severe global economic downturn caused by the credit crisis is bottoming out, although the group has warned that the recovery is likely to be weak and fragile.

Let's take a look at the charts. Click on all charts for a larger image.

The above chart shows that we've seen fair quarter to quarter increases from Japan, Germany and France.

The above chart shows that the month to month decrease is slowing. However, 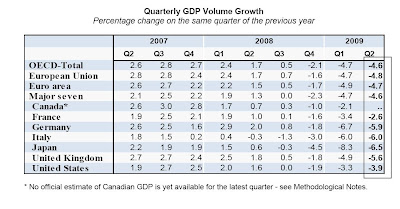 This is good news as we'll need out trading partners to be healthier. I think one of the drivers of the US recovery will be exports.
Posted by Unknown at 10:00:00 AM