The Fits and Starts Expansion

Now that I'm on record as saying the recession is over, it's time to look at the recovery.

I am also on record as saying growth will be weak, printing somewhere in the 1% to 2% range with high unemployment. It's extremely important to remember where certain numbers were just recently. For example, an economy that loses over 600,000 jobs over a series of months is not going to print a positive jobs number for some time. That's simply the way an economy the size of the US's works. To expect otherwise is very unrealistic.

Let's look at the various pieces that will play a part.

Instead, a new consumer will emerge. On June 1 of this year, Barron's had a cover story on the new consumer, which in general was described thusly:

As savings rise and the market rallies, however, a new consumer is emerging, seeking a sensible middle ground between the gross excesses of the mid-2000s and the privations of the past year. He -- and more often, she -- is likely to find it in companies that offer great products, excellent service and outstanding value, which, by the way, doesn't always mean the lowest price.

For now I disagree with the price issue. However, the rest makes a great deal of sense. Consumers will become far more selective about what they buy and purchase.

Here is a chart of the quarter to quarter percentage change of personal consumption expenditures that goes back to 1990: 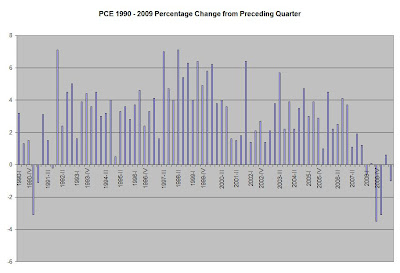 The median quarterly change in PCEs for this period was 3.2%. Notice how in the last two expansions the quarter to quarter PCE percentage change ranged from (in general) 2% to 4%. There is nothing indicating that rate of change couldn't be between 0% and 2%.

2.) The consumer will extend the life of most durable goods (cars and major appliances) by spending on parts and service.

4.) The current drop in consumer spending is very much a by-product of low consumer confidence brought on by the worst recession of the last 60 years. As the economy emerges from this, consumer confidence will rise and spending will increase. However, spending will not increase to previous levels. Instead, we can expect the consumer to increase his personal consumption expenditures in the 0%-2% range of quarter to quarter growth.

The next question is where will the money come from. The first answer to that is that while income has been dropping, it appears to be stabilizing. Here is a chart of the last 6 months of total wages and salary disbursements. 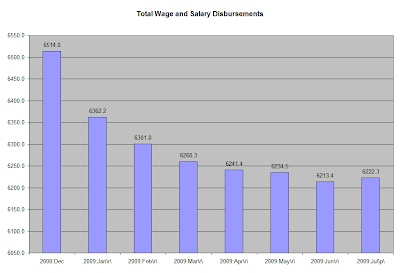 Notice that over the last 4 months, this number as stabilized in a range beween $6.441 billion and $6.213 billion. In other words, this number appears to the stabilizing. In addition, 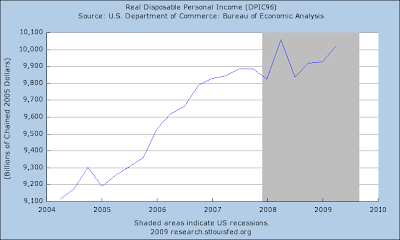 Real disposable income has actually been increasing. A large reason for this increase is an increase in government transfer payments which in turn have gone to increased savings. However, the point is the money is available for increased consumption when consumer sentiment picks-up to a point where it can increase.

Consider this chart of total US inventories: 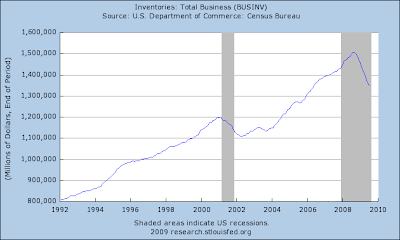 Inventories have dropped like a stone for roughly a year. At some point these will need to be replaced. While there is no indication the bottom has occurred yet at some point it will. And when that happens, another item of growth will be added to the equation.

Next year the real impact of the stimulus starts to hit. The CBO studied the Stimulus package and stated that:

Assuming enactment in mid-February, CBO estimates that the bill would increase outlays by $92 billion during the remaining several months of fiscal year 2009, by $225 billion in fiscal year 2010 (which begins on October 1), by $159 billion in 2011, and by a total of $604 billion over the 2009-2019 period. That spending includes outlays from discretionary appropriations in Division A of the bill and direct spending resulting from Division B.

The spending will occur over a variety of different governmental programs such as rural broadband development, homeland security, infrastructure, increases in unemployment benefits and a host of other programs.

In addition, there were tax provisions in the bill which would produce the following effects:

So, between actual spending and tax reductions, 2010 should see the direct impact of roughly $350 billion ($225 in spending and $131 in tax reduction). The real issue here is the multiplier effect -- how much of a larger effect will the spending have. Frankly, we won't know until the money is spent. But next year we'll see the ripple effect of the combination of tax cuts and spending. This will help growth.

There's a great myth that goes around the Internet: the US doesn't make things anymore. If that were true, then we would have exported $1.8 trillion dollars of goods in 2008. And in 2008, we exported $108 billion of foods and beverages, $388 billion of industrial supplies, $457 billion of capital goods, $121 of automotive products and $161 billion of consumer goods. In other words, exports account for about 13% of GDP. And they may become far more important to US growth:

In the process of gorging on overseas goods and services, the US by happenstance fired up emerging economies such as China, Korea, Taiwan, India, Brazil and Mexico to build their productive capacities and spawn their own middle classes and consumer cultures. Paulsen has long called this trend the US's "emerging-market Marshall Plan."

As US consumer spending slows we will import less, thereby lowering the total amount of imports in the trade deficit formula. At the same time, Emerging economies have seen a growing middle class which will want to buy more goods and services. And some of those will come from the US.

Next we have the Philadelphia Fed Manufacturing Index

And finally we have the Richmond Fed Manufacturing Index

All three of these indexes tell the same story: manufacturing is picking up. This sector will contribute to GDP growth.

First of all, it's important to remember where we are in the economic cycle. At the beginning of this year GDP was dropping precipitously and we were bleeding jobs at a 600,000/month rate. Given those two numbers it's important to realize we're not going to rebound to a 3% growth rate in a few months; that is just not going to happen. However, we did get massive federal intervention from the Federal Reserve and the Federal Government. We are currently benefiting from both of those actions. In other words, we're in the middle of a pure Keynesian economy, benefiting from government spending and policies when other parts of the economy have broken down.

I find it funny that a large number of people who argued for the stimulus are now saying the current economic activity can't continue because it's largely government based. In fact -- it's supposed to be a government based economy right now. The government intervention is supposed to act like a bridge between the last expansion and the upcoming expansion. That's what Keynes argued for. And with the spending increasing next year and then tapering off in 2011 we have some time for the rest of the economy to find its footing.

I describe the initial phase of the next expansion the "fits and starts" expansion because not one of the four elements outlined about will lead completely or continually. I think it's far more likely we'll see an increase in consumer spending one quarter followed by increased stimulus spending and an increase in exports the next quarter. In other words, various economic sectors will take the lead one quarter and then fall back. In other words, we'll see fits and starts from the above sectors.
Posted by Unknown at 10:30:00 AM