Real gross domestic product -- the output of goods and services produced by labor and property located in the United States -- decreased at an annual rate of 1.0 percent in the second quarter of 2009, (that is, from the first quarter to the second), according to the "advance" estimate released by the Bureau of Economic Analysis. In the first quarter, real GDP decreased 6.4 percent.

This is a much better number than the -6.4% of the first quarter. I'm going to spend the rest of the day and probably some of Monday looking in detail at this report because it is very important.

More concisely, the rate of decline in several economically important areas slowed. In addition, the uptick on government spending helped to slow the decline. 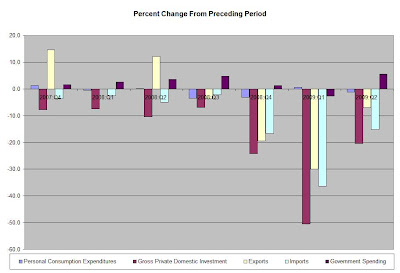 Above is a chart of the percent change from the preceding period in the sub-groups of GDP. They show some interesting points.

1.) Government spending really saved the day last quarter -- it was the one positive area of growth.

2.) The rate of decline in several important areas occurred at a slower rate. Gross private domestic investment decreased at a far slower rate as did exports and imports.